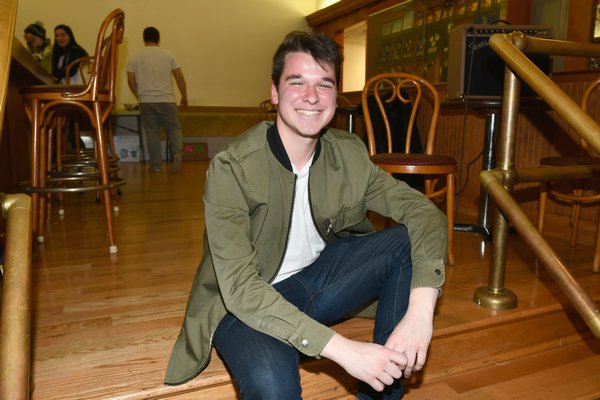 Christiaan Padavan at the viewing party at the Knights of Columbus in Hampton Bays on Monday night. DANA SHAW

Hampton Bays resident Christiaan Padavan recently had his shot at stardom on ABC’s “American Idol.” The episode which aired on March 18, showed the 20-year-old singer auditioning for celebrity judges Lionel Richie, Katy Perry and Luke Bryan in New York City. Mr. Padavan sang Billy Joel’s “Vienna” and was rewarded a golden ticket—a fast pass to Hollywood and the next round of the show.

Alas, Mr. Padavan’s Idol dreams came to an end during the March 25 episode when he was among those eliminated from the competition in Hollywood. Forty others went on to the next level.

Mr. Padavan is back home in Hampton Bays and this Friday, April 5 beginning around 3 p.m., he will be at the Southampton Press office for a Facebook Live event to talk about his “American Idol” experience and sing a few songs for his East End fans. Be sure to tune in! You can also hear Mr. Padavan’s music on Spotify or Apple Music.