Cynthia Daniels Takes Her Music Career To The Next Level 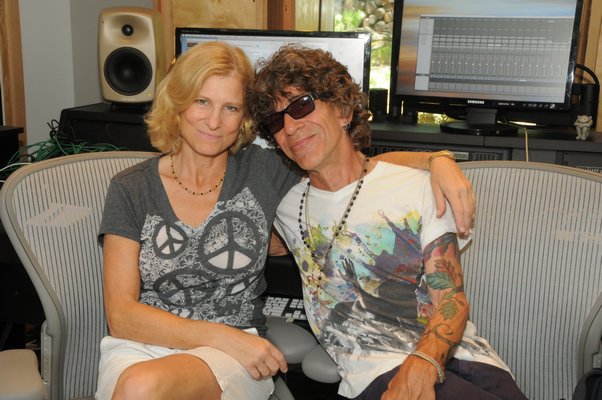 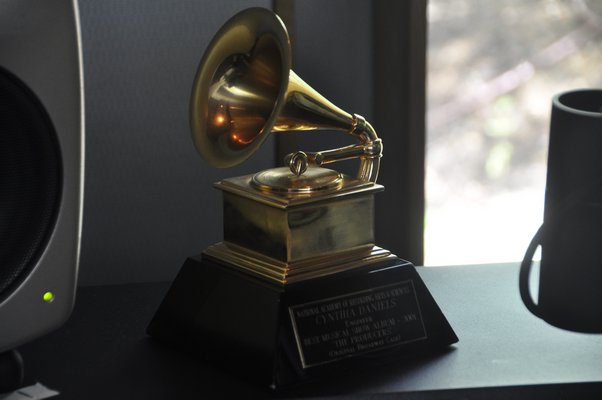 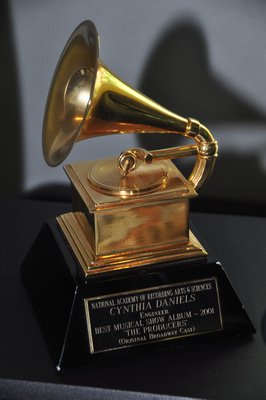 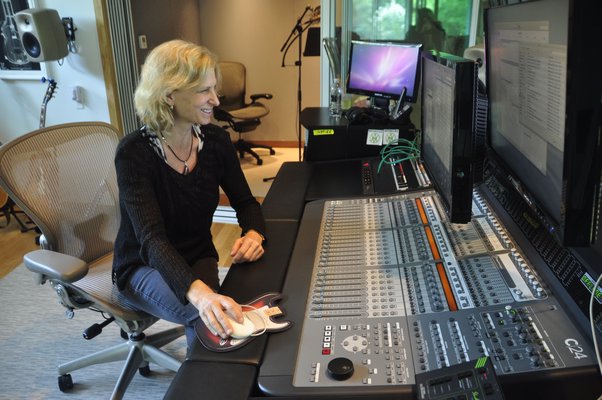 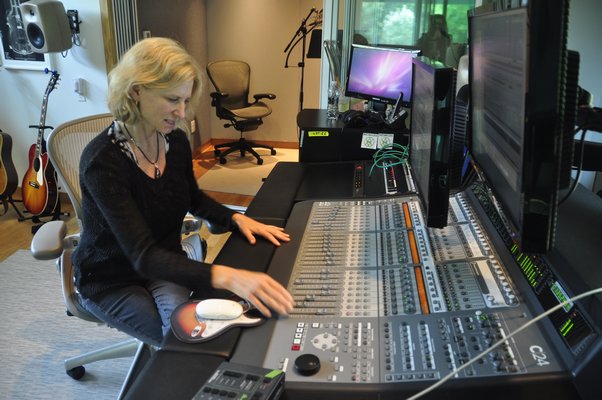 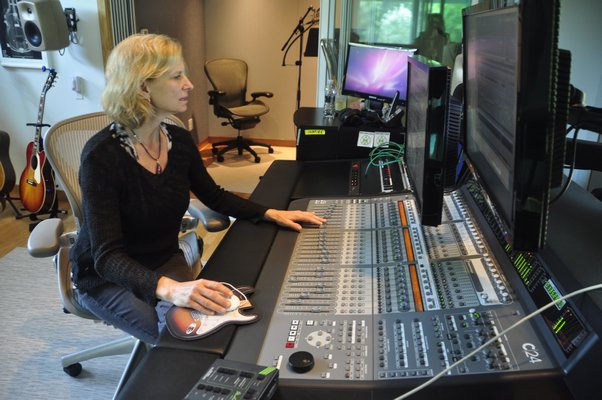 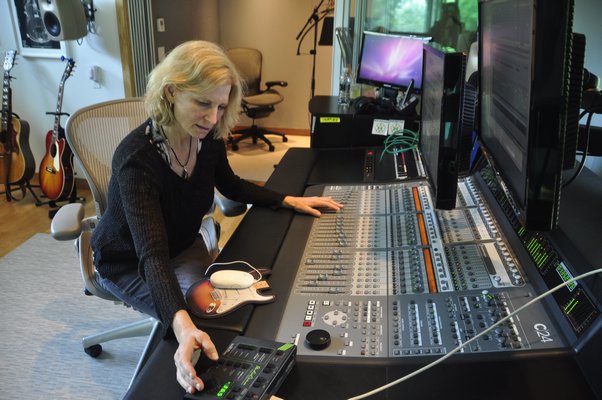 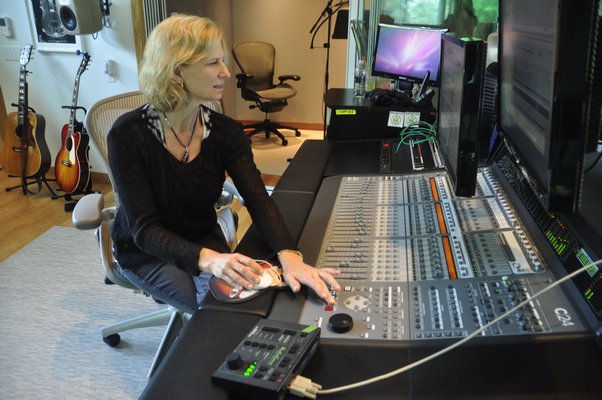 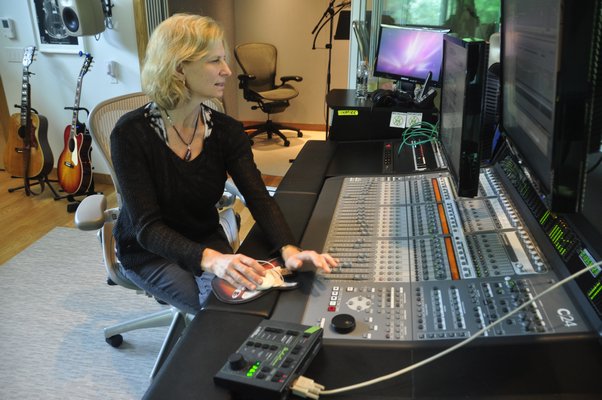 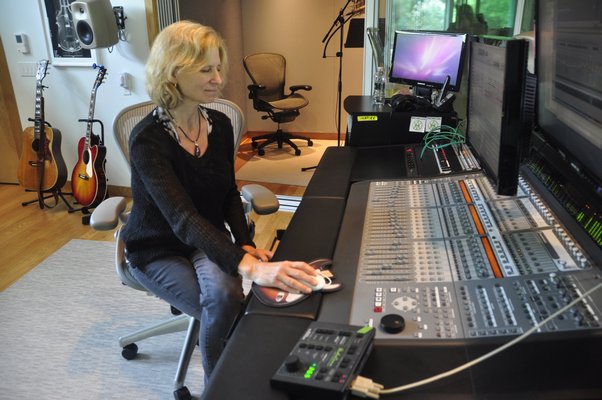 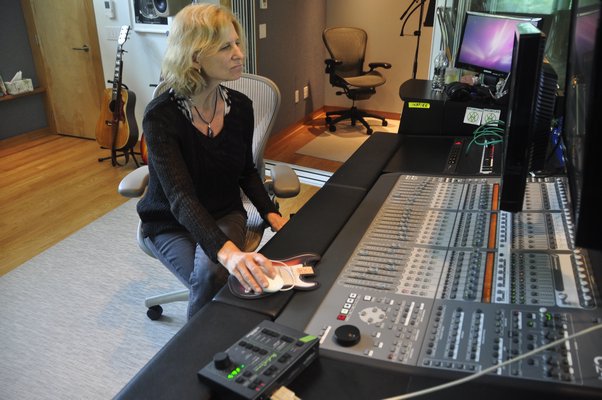 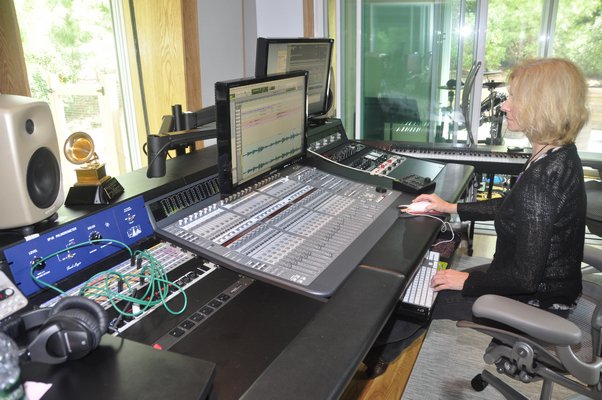 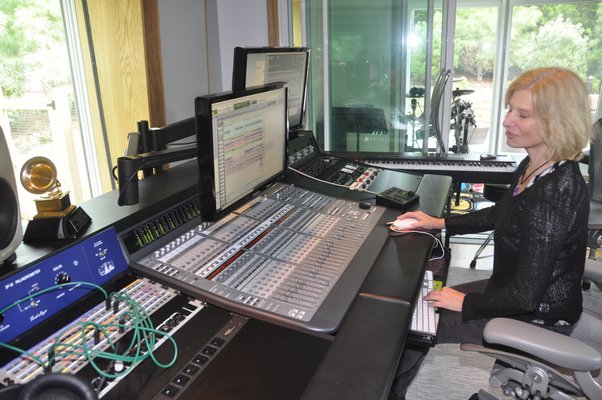 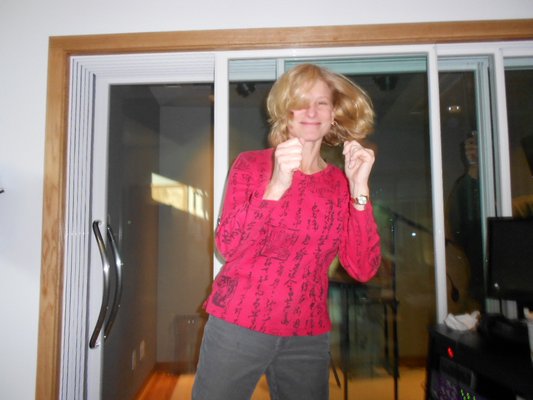 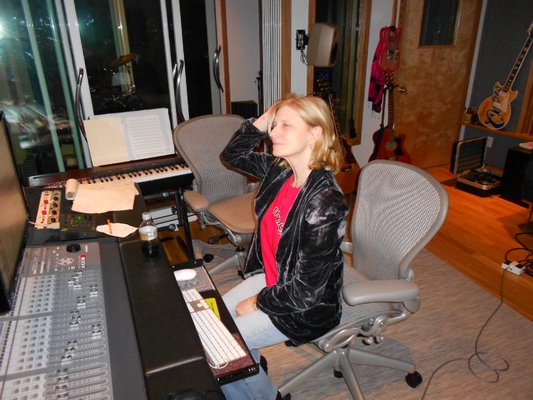 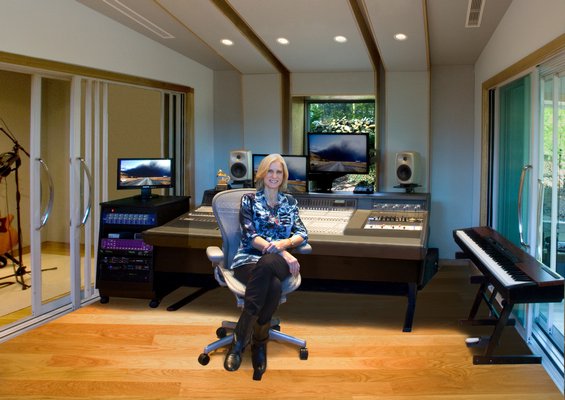 Cynthia Daniels in the studio. BY COURTESY CYNTHIA DANIELS

Cynthia Daniels got a late start this past Sunday morning. At 8 a.m., instead of her usual 6 a.m., she scarfed down a banana, cracked open a bottle of water and jumped into her state-of-the-art, East Hampton-based recording studio to work on her latest project.
She gave herself over to music engineering and production when she was a teenager growing up in Stamford, Connecticut, while listening to rock ’n roll. Even then she knew she would be working many hours, many days and many years to “get good at it,” she said. And she would also need a little luck.

“As they say, ‘The truth will out,’ the music will out,” the now 56-year-old said. “And you need to be at the right place at the right time, just like musicians. But in the end, the music speaks.”

It has a lot to say, and Ms. Daniels is all about spreading the word. Already the host of 88.3 WPPB’s MonkMusic Radio, the recording engineer recently kicked her 40-year career up a notch by launching her own independent label, MonkMusic Records.

Its debut album, “YoungBlood,” is by an emerging East Quogue rock band, InCircles. The three-piece group—vocalist Jewlee Trudden, bassist Eric Ponto and drummer Tyler Allen—has a cohesive sound, Ms. Daniels said. They have a certain level of musicianship, originality and energy. Their souls are starving, not just hungry.

And Ms. Daniels is not settling for anything less. She is not interested in collecting a roster. She is starting off slow, for now focusing on high energy and alternative rock ’n roll (“Surprise, surprise,” she laughed) in a day and age when the traditional record-label model is dead.

“There are ways out, because people are not going to stop being artists, thank God, and they don’t have to,” Ms. Daniels said. “We all have to get on the brain train and figure out a way. I’m tired of handing a recording artist a CD they’ve spent all their money and time writing and creating and saying, ‘You’ve just finished the easy part. Congratulations.’ And they’re just like, ‘That was easy?’”

The next step is making it, which is subjective for each artist. That is where Ms. Daniels now steps in, with a serious dedication and mean work ethic, she said.

“I wanted to see if I could help this particular band and others in this genre do that. Make it,” she said. “I have no illusions. Lady Gaga is a Cinderella story. So is Madonna. These are real-life fairy tales. It’s not that they’re false, it’s that they’re fairy tales that you’re going to meet the prince and he’s going to chase after you and he’s going to search the countryside for you. That doesn’t happen all that often. It’s a confluence of vectors, it’s a confluence of activities and hard work like any successful person. It doesn’t go on 9 to 5. You have to live and breathe the music.”

Ms. Daniels always has lived and breathed music. She grew up on “prog rock”—Genesis, Jethro Tull, The Who, The Doors—and it was while combing the back of a Yes album that she stumbled across her future profession: recording engineer. She was 16.

“My boyfriend at the time was a guitar player in a band, so I was learning the guitar and I knew I had a love of scientific things and how things work, and a soul-saving deep love for music,” she said. “I was pretty sure that there was a way to make a living at it without taking my chances on being a rock star, because I didn’t think I had the goods for that. So I sought out the definition of what I wanted to do and found it very quickly.”

The ambitious teenager moved to Boston University to study film, broadcasting and recording engineering. There, she fell into the punk and rock scene—Patti Smith, Jimi Hendrix, David Bowie and Todd Rundgren. While still in college, she spent a summer at a recording institute in Greenwich Village, where she was—unsurprisingly—the only female student.

She’s since gotten used to it.

“I’m always the only girl, except when I work with musicians who are not males,” she said. “Why? You know what, we’d have to ask them, right? In my mind, who wouldn’t want to do this? This is my ideal life, my ideal job. Every day of my life, I’m the luckiest person in the world.”

A lot of mixing is about blending, Ms. Daniels explained. It has taken her decades of experience and countless trials and errors to master, what she calls, a “sonic stew”—several takes of a performance with the correct balance of energy and excitement as close to musical perfection as possible, coupled with subtle effects and textures generated through editing, equalizing and contouring, she said.

The “sonic stew” recipe has earned her two Grammy Awards—one in 2002 for her work on the cast album of “The Producers,” which sits proudly in Ms. Daniels’ studio, and another in 2011 for “Julie Andrews’ Collection of Poems, Songs and Lullabies,” also in a special place next door in her home.

“Working on ‘The Producers,’ did I know what it was going to be when we recorded it? No,” she said, picking up the award. “Wanna hold it? It’s heavy. It’s heavier than you think.”

She weighed it in her hand and did a double take when checking out its bottom, left-hand edge.

“Oh, I seem to have a chip on the ol’ Grammy,” she said in a mock British accent. “A little Sharpie will fix that, just like the toes to my leather boots.”

A long list of big names have walked through Ms. Daniels’ studio—Alec Baldwin, Paul McCartney and Beyoncé, just last summer, to name a few—but it was Chaka Khan who inspired the recording engineer to move from Manhattan to East Hampton full-time in 2006, eight years after she bought her summer home that she shares with Cori Krane, and three cats and a dog.

“Chaka Khan was a very big highlight in my career,” Ms. Daniels said. “We not only went to Abbey Road and recorded the London Symphony after recording her in New York, but it was the first major album I mixed out here in East Hampton. And it was when I made my decision to move my whole studio out here.”

Before renowned recording studio architect John Storyk designed Ms. Daniels’ three-room, light-filled facility in 2011, various rooms in her home served as temporary spaces. With every move, she pasted acoustical foam and reflective materials onto the walls, creating mini-studios wherever she needed them.

“That day, when I moved all of my equipment out of my New York apartment, I knew I would do everything I could to do most of my work here,” said Ms. Daniels, who writes and performs her own music locally in her free time. “This is not a home studio. It’s actually a completely separate building. It’s every bit the studio that a New York studio is. It may not have as much real estate as some of the larger rooms, but we get rhythm sections in here all the time.”

She laughed and clicked away from her computer’s desktop, pulled up a few basic tracks on her editing software and got to work, adjusting the levels on her console. She closed her eyes, swaying to the music and effortlessly flipping between the keys on her keyboard to start and stop when the mood struck her.

The background image on her computer was a photo captured after the 2011 Icelandic volcano explosion.

“It kind of felt like the journey that you take with people around here. Musicians are trying to get inspired and I kind of liked the way that felt,” she mused about the picture. “A long, unknown road with some big storm going.”