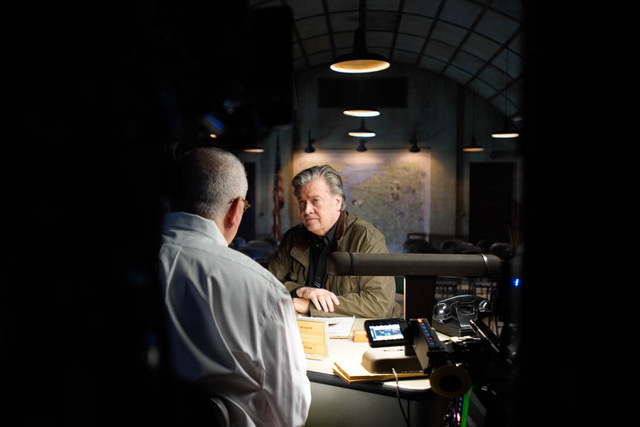 Oscar-winning filmmaker Errol Morris is not afraid to take on controversial subjects. After delving into the personas of Secretaries of Defense Robert McNamara (“The Fog of War”) and Donald Rumsfeld (“The Unknown Known”), in “American Dharma,” Morris trains his lens on one of the most bombastic political figures of our time — Steve Bannon.

On Sunday, October 27, at 6 p.m., Sag Harbor Cinema presents a special screening of “American Dharma” at East Hampton’s Guild Hall. Part intellectual debate, part news, part dialogue, “American Dharma” is the result of a 16-hour conversation between Morris and Donald Trump’s former chief strategist. The film had its world premiere at the Venice Film Festival in 2018.

“The last work that sprung from Errol Morris’ genially inquisitive mind and unflinching eye may be one of his more thought-provoking; probably his darkest,” says Giulia D’Agnolo Vallan, artistic director for the Sag Harbor Cinema. “We are thrilled to be able to bring it to our audiences a few days before its U.S. release at New York’s Film Forum."

The backdrop of the lengthy conversation between the filmmaker and the political operative is the reconstructed set of one of Bannon’s favorite films (and one of Gregory Peck’s finest), Henry King’s “Twelve O’ Clock High” (1949). Orson Welles’s “Chimes at Midnight” and John Ford’s “The Searchers” also enter the conversation as Bannon explains how movies have molded his perception of the world and of himself.

His background, his philosophy of total disruption, his relationship with Trump and his reading of current events, both in the U.S. and Europe, are also touched on as Morris allows his subject to reveal himself. The pace is both leisurely and incredibly intense. Besides a Harvard past, the two men share very little, but Morris makes it clear that disagreeing with something doesn’t exonerate us from trying to understand it.

“Facing danger, square on, is usually the best course of action. Our country was plunged into chaos, or worse, in 2016, and Stephen K. Bannon was at the center of it,” said Morris. “I feel that it is important to talk to him, to investigate him, and to understand his point of view. Steve Bannon asked me why I wanted to make ‘American Dharma.’ I told him I didn’t understand him or why he was doing what he was doing. But I thought if making a film could help me, and others, understand any of this then it would be a good thing.”

“We live in a time when people are trying to make up reality on the spur of the moment, as if reality doesn’t exist independent of us. As if reality is simply up for grabs,” Morris continued. “I passionately believe that there is a real world out there and that there is such a thing as truth. And one of the most repellant things ongoing is the denial of that fact”

Guild Hall is at 158 Main Street in East Hampton. Tickets are $15 at the door and at sagharborcinema.org.