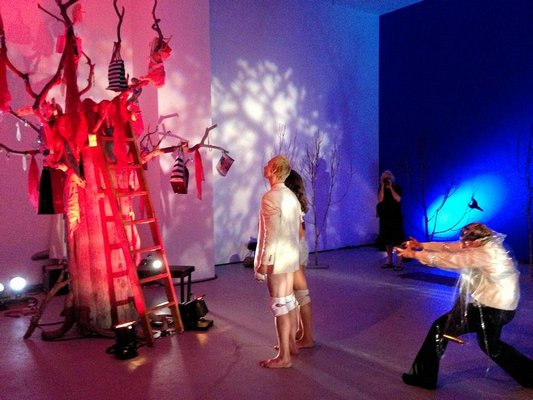 Kate Mueth and the Neo-Political Cowgirls have reprised “EVE” at LTV Studios in Wainscott. Though there have been some cosmetic changes to the production, the basic story and structure of last year’s hit show remains the same.

This interpretation of the Biblical creation story focuses on the play’s namesake, Eve, played with beautiful strength by the wide-eyed Ana Nieto. Eve’s journey takes her from creation, to her first friendship, becoming a blushing bride, popping pills as a red carpet diva and ultimately yearning to be a mother and create life herself. She casts off the materialism that had been thrust upon her with a monologue, written by Devon Leaver, one of only a handful of moments in which words are used at all in the play.

Music drives the action over the spoken word in this predominantly silent play. The five supporting ladies did a nice job filling the rooms with movement and intrigue before the main event began.

This reviewer gives a lot of credit to the cast for maintaining their characters and action, even to a smallish crowd.

Homa Hynes, as the temptress Lilith, did an exceptional job of engaging audience members. She and I ended up in a sort of staring contest at one point. Without a blink, she walked right up to me, squeezed my hand and passed me a note on which she had written, “hurt.” I found other similar papers on the ground that read, “no more pain” and “I need to be felt,” which expressed her unrequited love for Man.

Because the performance space encompasses an entire floor of LTV Studios, there are many rooms to explore. While it was fun to race after the performers, it was easy to miss elements of the story for those who might not be physically quick.

Jael Baker, who played Shadow, danced a beautifully improvised solo while Eve and Man led the bulk of the crowd into another room. I was happy to have stumbled upon it.

Last year, the set design and costuming departments absolutely sold me on the entire “Eve” experience. This year, they again played beautiful roles for the piece.

Yuka Silvera’s flowing and versatile cover-ups for the chorus and Eve’s silver outfits fit their parts to a tee. They were unique to the show but still very much Ms. Silvera’s style.

I was grateful also that Brian Leaver’s original concepts remained intact in the myriad rooms that encompass “Eve’s” set. Many rooms were identical to last year and the rest had only minor alterations. The biggest change was to the exact design of the Tree of Life, but its placement, utilization and decor stayed true to the first production.

Curiously though, the playbill gives top billing to Hanna Cook for set design and on the second page she is the only name listed in this category. Similarly, Ms. Silvera is listed along with Sarah Azzara for costume design on one page, but Ms. Azzara is listed alone on the second.

While Cook and Azzara did add their own pieces, flair and accessories, credit must be given to both Mr. Leaver and Ms. Silvera. Kudos as well to Ms. Azzara and Ms. Cook for staying true to the original, and effective, design.

Another highlight of the evening was the show opening dance party, started by The Maker, played by the charismatic and convincingly mad Josh Gladstone.

Mr. Gladstone’s Dr. Frankenstein, or god-like, character emerged from on top of one of the rooms and shouted, “It’s show time!” The three chorus dancers—Kasia Klimiuk, Margaret Pulkingham and Irina Thompson—then confronted the audience, slithered around the space and, at The Makers command, got the party started!

In the second part of the show the dancers each played multiple characters, pushing Eve to embrace the frivolity of a life of materialism. I really enjoyed watching their performances as the different characters and they are fabulous dancers too.

Kate Mueth and the Neo-Political Cowgirls production of “EVE” continues through Sunday, August 4, at LTV Studios in Wainscott. The show stages Wednesday and Thursday at 7 p.m., Friday and Saturday at 9 p.m. and Sunday at 8 p.m. Comfortable footwear is recommended.

Tickets start at $35. For reservations and additional information, visit npcowgirls.org.