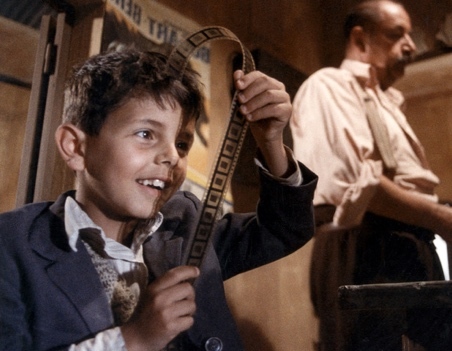 In the weeks leading up to its reopening, Sag Harbor Cinema is presenting “Here Comes the Cinema!” a feast of films celebrating movie houses of all kinds and a tribute to the magic of cinema as a shared experience.

From Southern Italy to Taipei, to the Klondike of the Alaskan Gold Rush, from Key West during the Cuban missile crisis, to occupied Paris, from Texas to New Jersey, the new program will travel through film history to celebrate the power of film.

The programming begins at 7 p.m. on Monday, December 16, which is the third anniversary of the fire at the Sag Harbor Cinema, with a screening of Giuseppe Tornatore’s “Cinema Paradiso” at Bay Street Theater followed by a conversation with screenwriter and Sag Harbor Cinema board member Bill Collage, moderated by Founding Artistic Director D’Agnolo Vallan.

Set in a small village in Sicily just after World War II, the film follows the friendship of a young boy and the town projectionist. In the dark of a cramped movie theater, the boy, who later in life becomes a prominent Cinecittà movie director, is exposed week after week to the wonders of film by his mentor. “Cinema Paradiso” won the 1989 Academy Award for Best Foreign Language Film, as well as a Special Jury Prize at the 1989 Cannes Film Festival.

Bill Collage has been a feature film screenwriter for over 25 years and has worked with directors Martin Scorsese, Ridley Scott, Zhang Yimou, Ron Howard, Darren Aronofsky, Cary Fukunaga and Anton Corbijn, among many others. His upcoming projects include “Be Free Or Die,” directed by Charles Burnett; “Bright Path: The Jim Thorpe Story,” produced by Angelina Jolie; and “Emancipation,” starring Will Smith, directed by Antoine Fuqua.

“Whether it’s a scene or an entire film, cinemas and the movie-going experience have been at the heart of so many movies … It seemed a natural theme for this last pre-opening series; and also a good way to acknowledge the extraordinary collective effort that made possible the rebuild of the Sag Harbor Cinema,” says Vallan.

Admission to the screening is free, but seats must be reserved at sagharborcinema.org. To make a reservation by phone, call Bay Street’s box office 631-725-9500, or visit Tuesday through Sundays, 11 a.m. to 5 p.m.

Following is a full list of films included in the series and the special guests in conversation after each screening:

“The Cameraman” by Edward Sedgwick and Buster Keaton (1928)