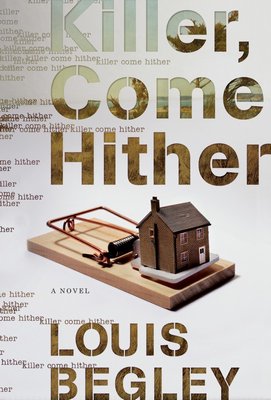 Graham Greene once divided his novels into two types: the serious and the “entertainments.” Louis Begley now knows a thing or two about the latter. With his new novel, “Killer, Come Hither” (Nan Talese/Doubleday, 246 pp., $25.95), the Sagaponack-based author has turned away from his serious examination of the cracks in the veneer of upper-class life and produced an “entertainment.”

This is not to say he has completely turned his back on his milieu—there is still plenty of mahogany in the law offices. It’s just that he has added murder, mayhem and revenge to the mix. He also seems to be displaying a certain contempt for the law’s ability to bring about justice, at one point saying, with Dickens, “The law is an ass.”

Most of us are content to have one profession. Not Mr. Begley. His first profession was law, a partner in the prestigious firm of Debevoise and Plimpton LLP as the highly successful head of its international division. As if the profession of high-powered lawyer weren’t enough, in 1991 he published his first novel, “Wartime Lies,” winner of the PEN/Ernest Hemingway Foundation Award and finalist for the National Book Award and a National Book Critics Circle award. He also penned “About Schmidt”—adapted into a film starring Jack Nicholson that, sadly, bore no relation to the novel—and its two successors, “Schmidt Delivered” and “Schmidt Steps Back.” Mr. Begley has also written scholarly books about Kafka and the Dreyfus affair.

With “Killer, Come Hither,” Mr. Begley let his hair down and wrote a thriller. The bad guy, Abner Brown, is politically “to the right of the John Birch Society and Genghis Khan.” He’s fabulously wealthy and up to his elbows in a variety of criminal endeavors. He is a “Napoleon of crime.”

The hero of the book is Jack Dana, a Yale graduate and classics scholar who was bent on an academic career until, after 9/11, decided he owed it to his country to join the Marines. Unfortunately, a sniper in Afghanistan puts an end to his military career and, while he was in Walter Reed Hospital recovering from his injuries, he began writing a novel based on his military experience. Then, his uncle Harry, a successful attorney, invites him to recuperate at his houses in Manhattan and Sag Harbor.

Uncle Harry is Jack’s surrogate father, as both of Jack’s parents had died when he was fairly young, and Harry made sure that he had the best education possible. He introduced him to the worlds of art and music, and shaped his taste in literature.

Through connections at his law firm, Harry finds Jack a publisher and the book is well-received, followed by additional success with a second novel. Jack soon decides he needs a little vacation and escapes into the wilds of Brazil, putting the outside world behind him.

Reading his email on the way back to New York and civilization, Jack discovers that, while he was gone, Harry had died—hanged in his Sag Harbor home, apparently a suicide. Jack is convinced his uncle did not commit suicide and embarks on a campaign to find his killer. He enlists the aid of his best friend from college, Scott Prentice, a CIA officer, and Karen Black, the attorney with Harry’s firm who was closest to him, and with whom Jack falls helplessly in love.

As it turns out, Harry was the attorney for Abner Brown, who dismissed Harry before he died. It becomes evident that Brown is in some way responsible for Harry’s death, though it remains to be proven. (I give nothing away here.) What is clear is that Harry knew too much.

We follow Jack as he unravels the web that Abner Brown has woven to cover his activities, discovering real evidence that his own life is in danger. There is a mysterious and menacing hit man, and we read about curare-dipped poison darts—not the usual ingredients of a Louis Begley novel.

One might quibble that the opening development is a little slow, but it soon rattles right along. Mr. Begley clearly had fun writing “Killer, Come Hither” and giving vent to the more anarchic strains of his personality. The fun is infectious.

“What’s next?” we might ask. Will there be a sequel? Will Mr. Begley be tapped by the Ian Fleming Estate to write the next James Bond thriller? Stay tuned.