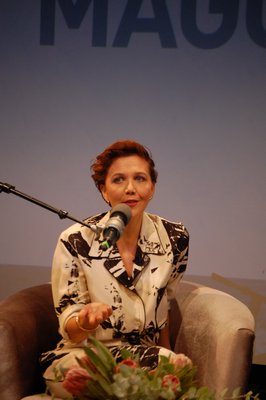 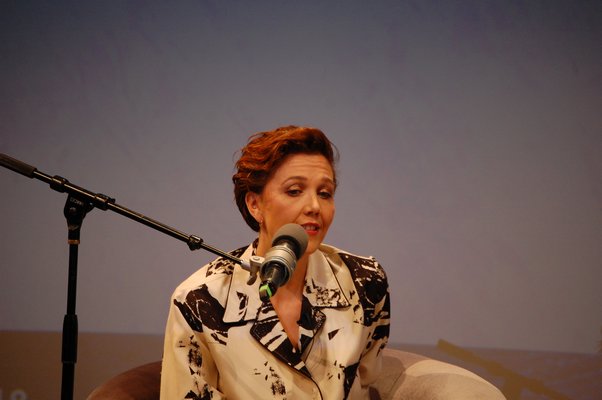 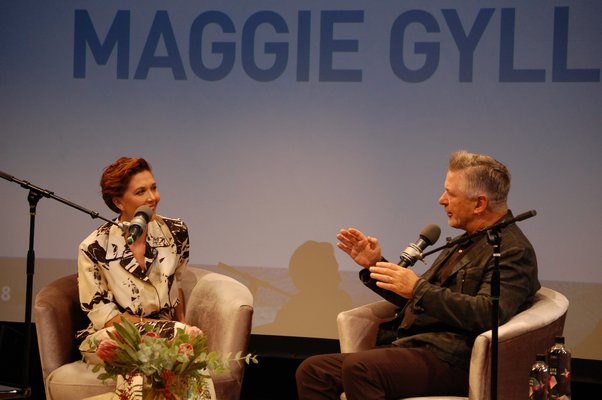 During a compilation of clips from her filmography, there are many interesting hard cuts between the movies of Maggie Gyllenhaal. It’s intriguing to map the career of an actor who goes from getting spanked by James Spader in “Secretary” to seeking redemption for the sake of her daughter in “Sherrybaby” to getting saved by Batman in “The Dark Knight.” Yet 26 years into her film career, Ms. Gyllenhaal’s deep love for making movies hasn’t diminished.The Oscar-nominee spent Columbus Day weekend promoting her latest film, “The Kindergarten Teacher,” which she serves as both star and producer of. The movie, set to be released on Netflix this Friday, October 12, was the opening night film for the 2018 Hamptons International Film Festival, hence why she sat down with HIFF co-Chairman Alec Baldwin for “A Conversation With ...” at Bay Street Theater in Sag Harbor this past Friday. Mr. Baldwin opened the chat with a friendly reminder that filmmaking is in the Gyllenhaal family blood: Ms. Gyllenhaal’s brother, Jake Gyllenhaal, is a fellow Oscar-nominee, and her parents are filmmakers Naomi Foner and Stephen Gyllenhaal. Though her father was from Pennsylvania and her mother was from New York, Ms. Gyllenhaal said she and her family moved to Los Angeles for her parents to keep making movies. While she and her family went to the movies every weekend, her television diet was restricted to “Sesame Street” and “The Cosby Show,” she shared, though she would watch a small amount of “CHiPs” that brought out some—ahem—interesting first moments.

“It was one of the first, ‘What is this feeling that I’m feeling?’ feelings,” Ms. Gyllenhaal said to the audience’s surprise laughter.

While she started her film career with a background role in her dad’s 1992 film “Waterland” and had sporadic film roles throughout the decade, she took time off to attend Columbia University from 1995 to 1998. She said that while she was at school, she learned to write more and be able to speak her own mind in future film roles.

“Basically, it was a progressive experience,” Ms. Gyllenhaal said. “I was younger and newer and it was harder to say what I wanted on a set. First I was a jobbing actress trying to get work, which is hard to do when you’re only coming in for one second.”

While she’s happy to have her voice heard now, that doesn’t mean she wants total control on a set. Ms. Gyllenhaal described an experience when she was involved in a reading of an Alan Alda-penned play overseen by director Mike Nichols (“The Graduate”), who had a quick note on the character she was reading.

“He came up to me after a day of rehearsal and said, ‘She’s feral,’” Ms. Gyllenhaal recalled. “And for the longest time I thought that was the best direction I had ever gotten. He was saying, ‘Go further.’ I want the deepest artistic collaboration possible.”

She’s seemingly found that collaboration with “The Kindergarten Teacher” and its co-writer/director, Sara Colangelo. Ms. Gyllenhaal first heard about the movie’s script at a holiday party a few years back.

“I had that feeling where I closed the last page of the script and was like, ‘I want this movie,’” she said. “I was energetically raising my hand asking for this.”

While the film, about a kindergarten teacher who becomes fascinated with a 5-year-old poetry prodigy, is a remake of a 2014 Israeli film with the same name, Ms. Gyllenhaal said the new movie tells a different story about what happens when, as she described, a “vibrant woman’s mind,” is starved by modern society. She also talked about the difficulty with fundraising, as she said she shook hands with 50 executive producers at the Sundance Film Festival to financially back the movie that was shot in a mere 23 days.

Ms. Gyllenhaal also talked about working with her co-star, Parker Sevak, who plays the young prodigy. She admitted to almost not doing the movie because it didn’t seem worth asking a young child to act in such an odd story.

“No movie is worth disturbing a child for,” she said. “I don’t think 5- or 6-year-olds are actors; I don’t think they should be asked to be actors.”

She described the on-set environment as “very feminine,” which must have been new to her since she admitted to not knowing exactly what that means. She could only compare it to seeing “The Piano” when she was 16 and having never seen something like that before.

“We’re so used to seeing things from the masculine perspective in movies and twisting it to relate to us,” Ms. Gyllenhaal said. “Reading this, I went straight into the environment. The movie might be new because it doesn’t tick the boxes movies usually do.”