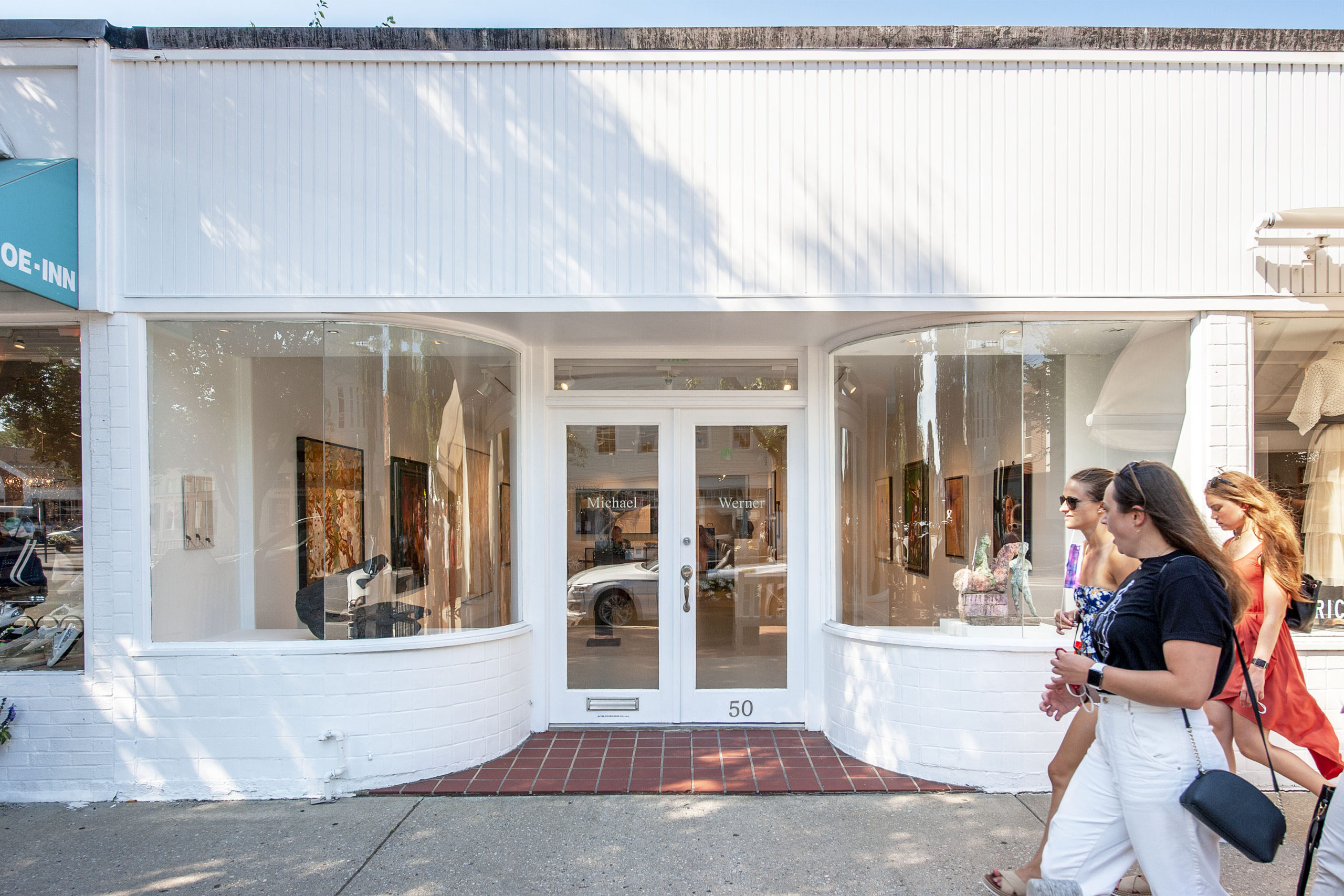 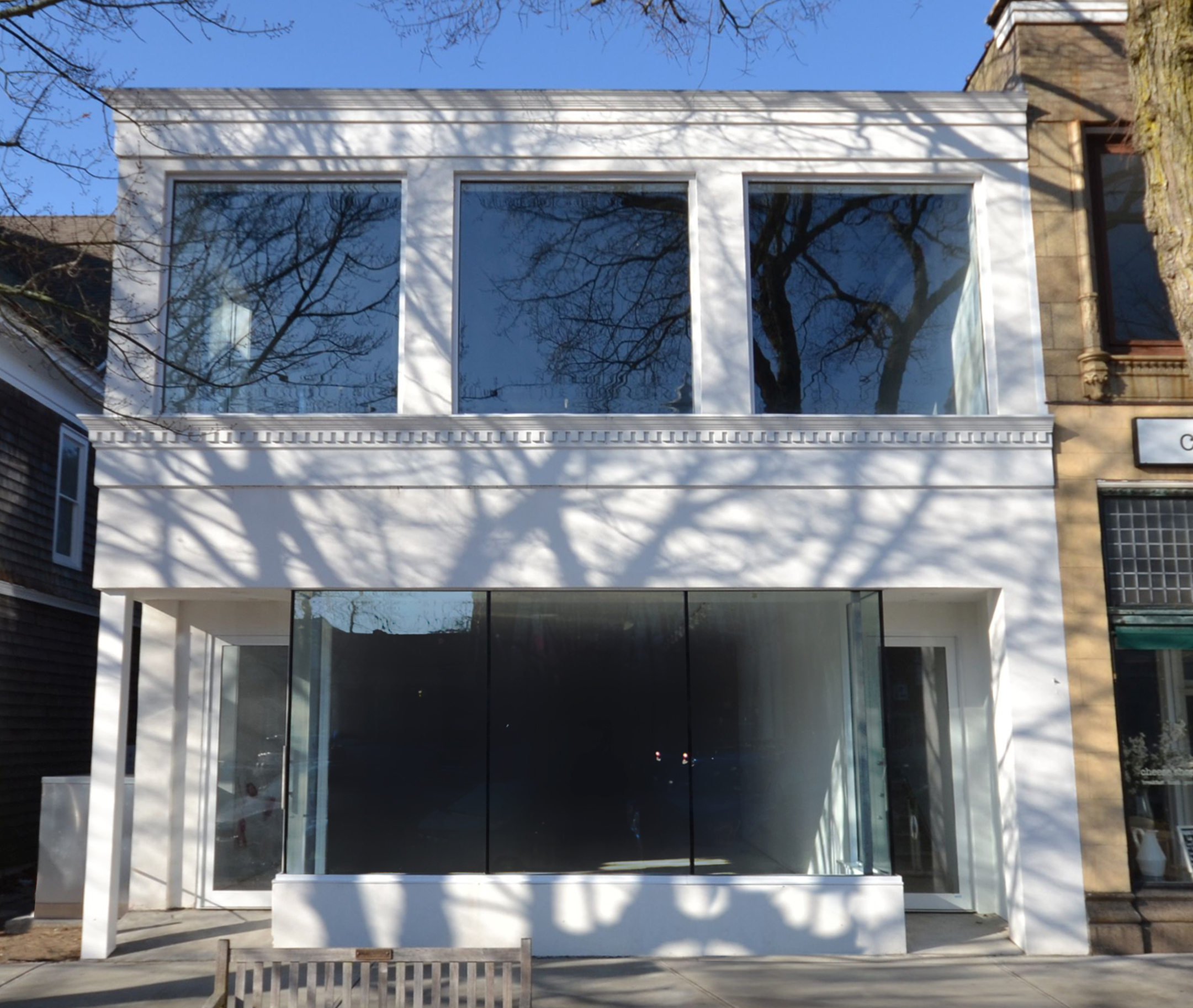 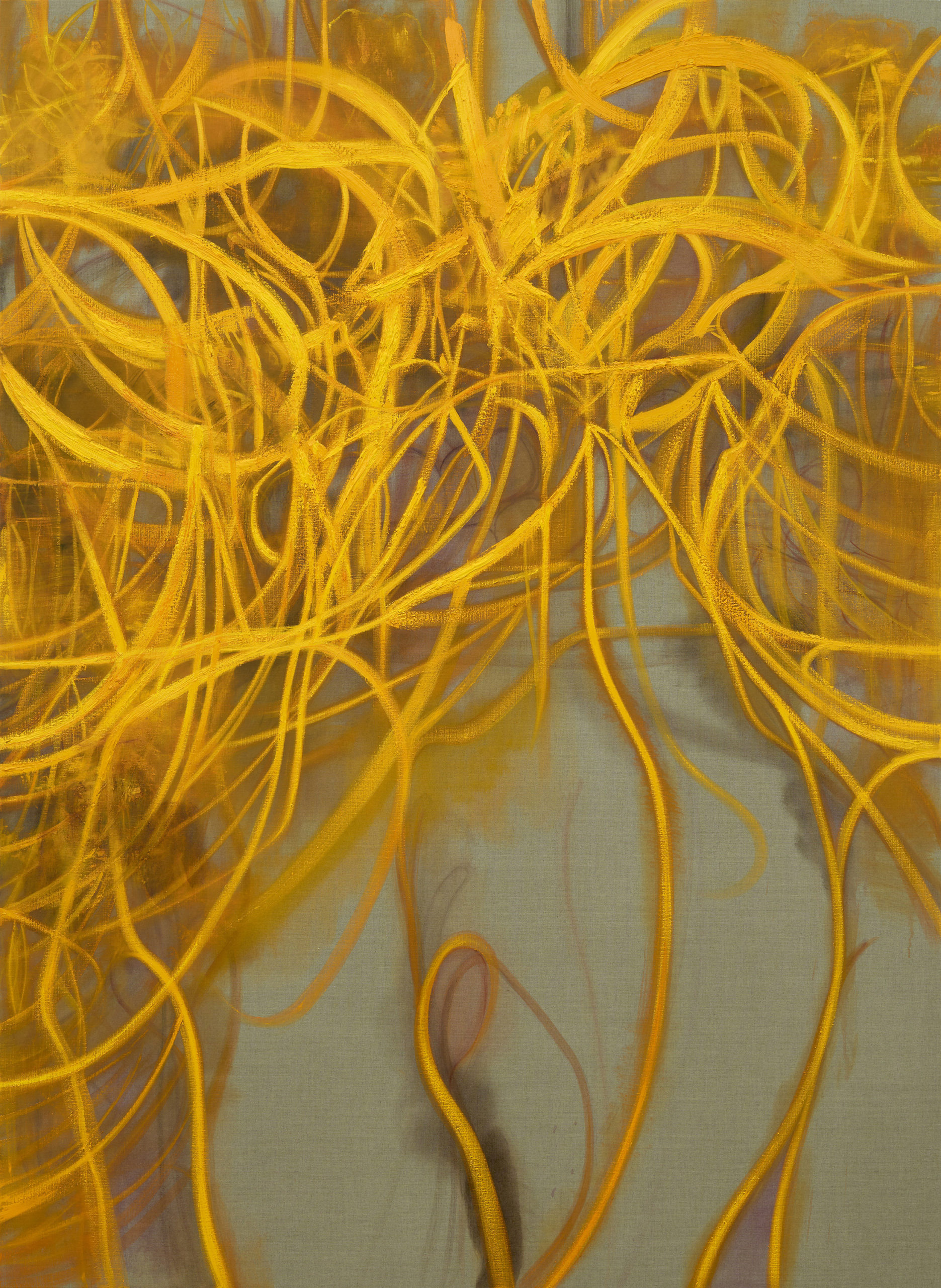 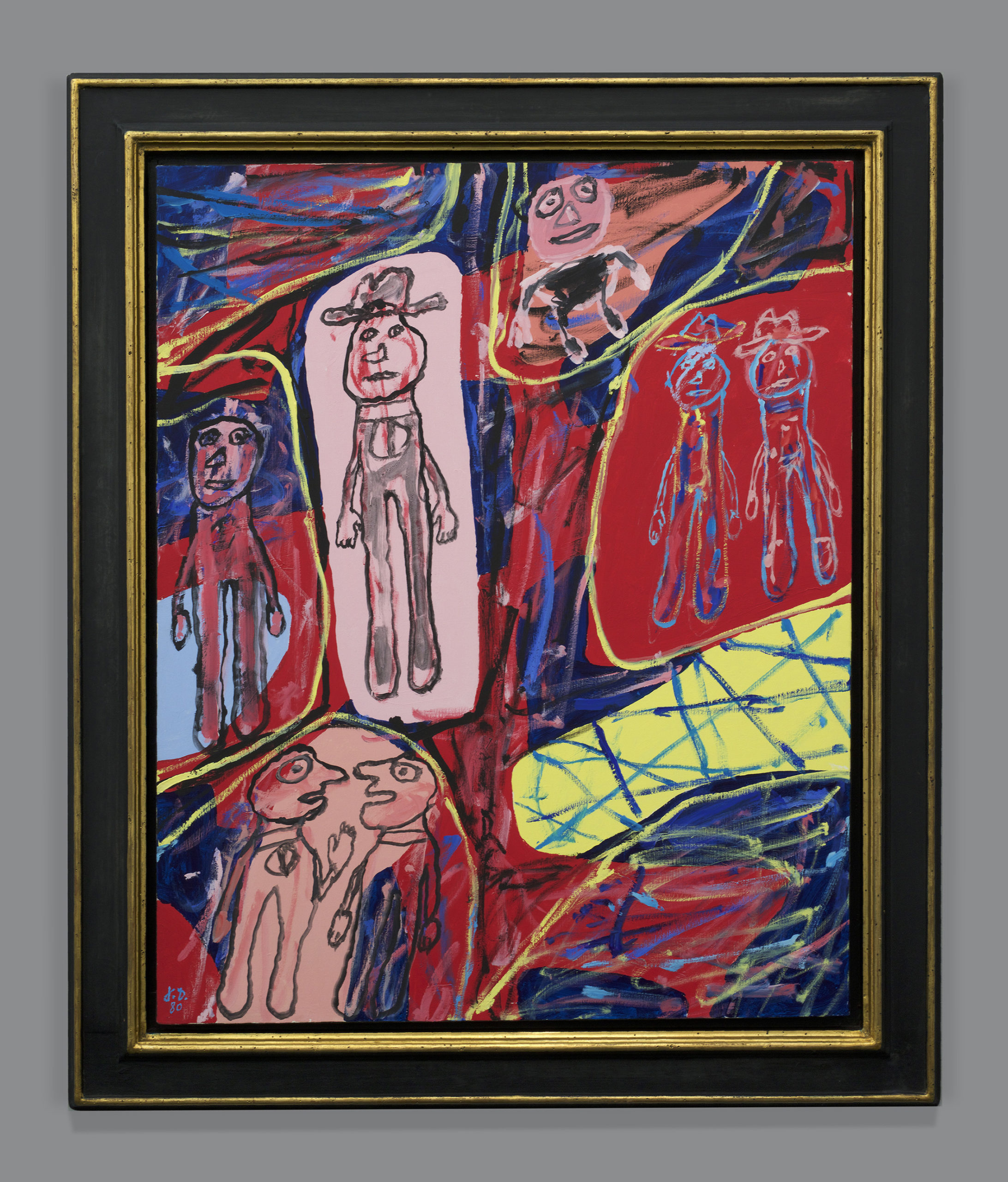 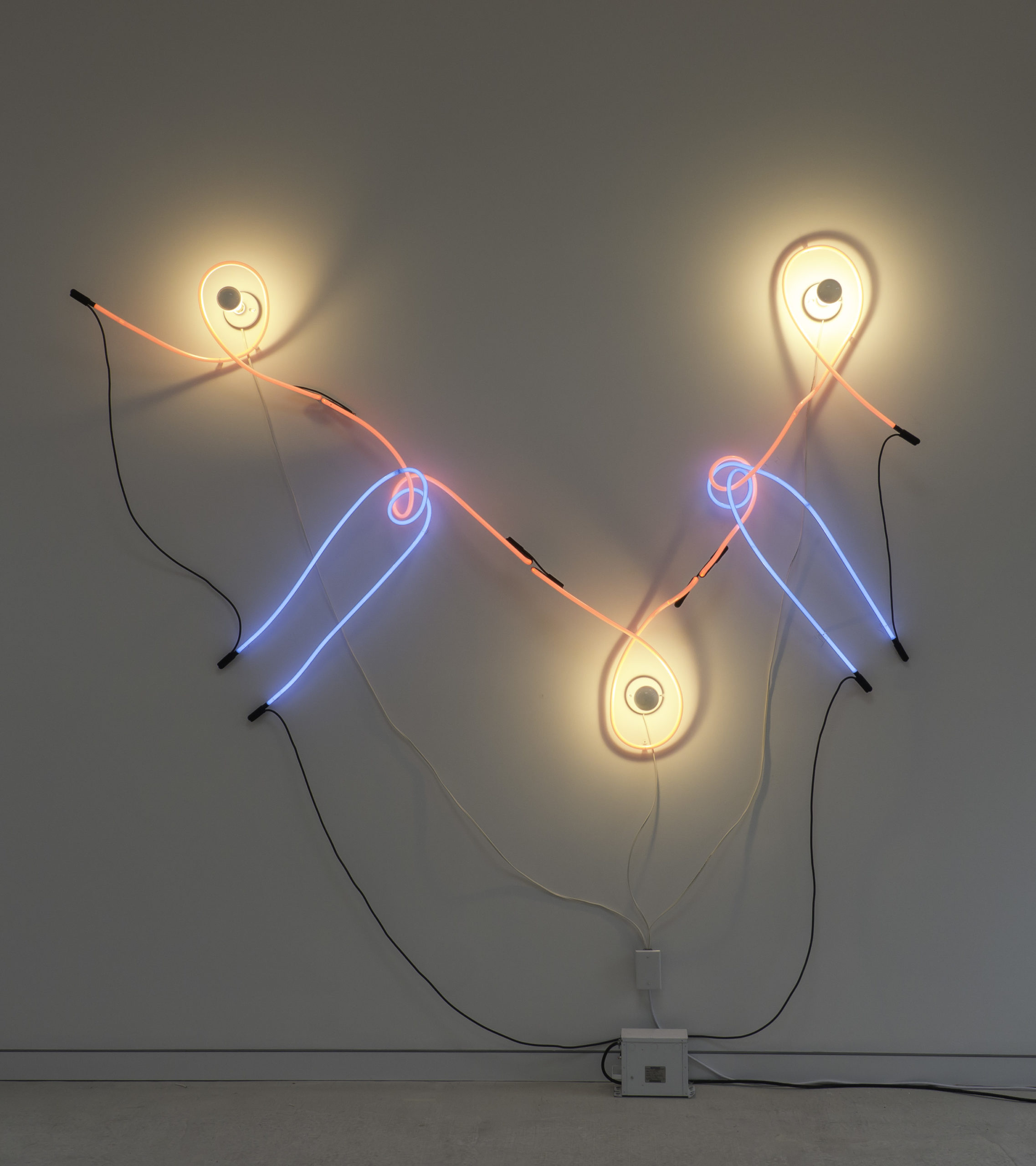 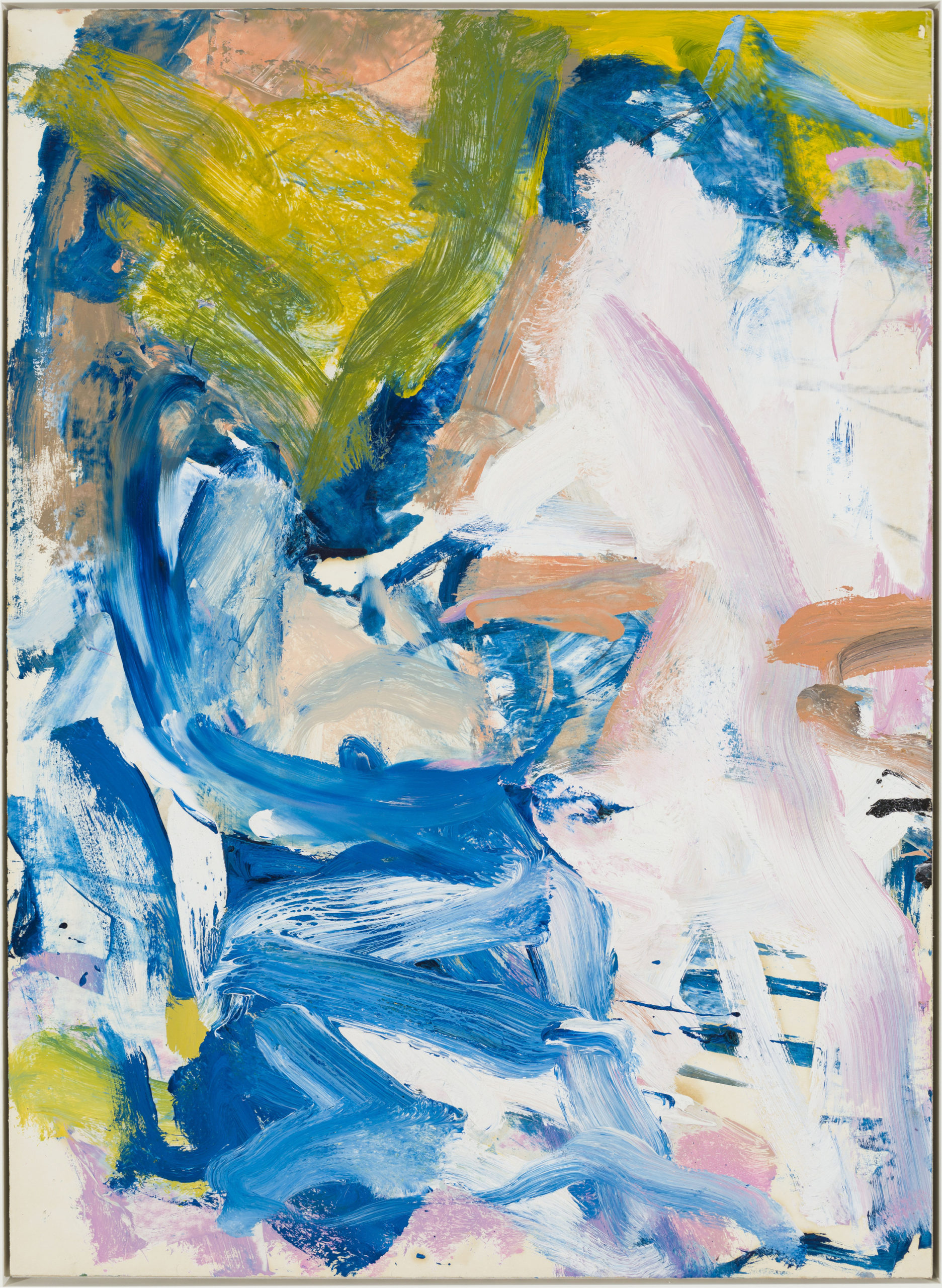 A 1977 painting by Willem de Kooning, which demonstrates an airier and more delicate approach to his work, is on view in the group exhibition, "Champions," through August 2 at Pace Gallery in East Hampton. COURTESY PACE GALLERY 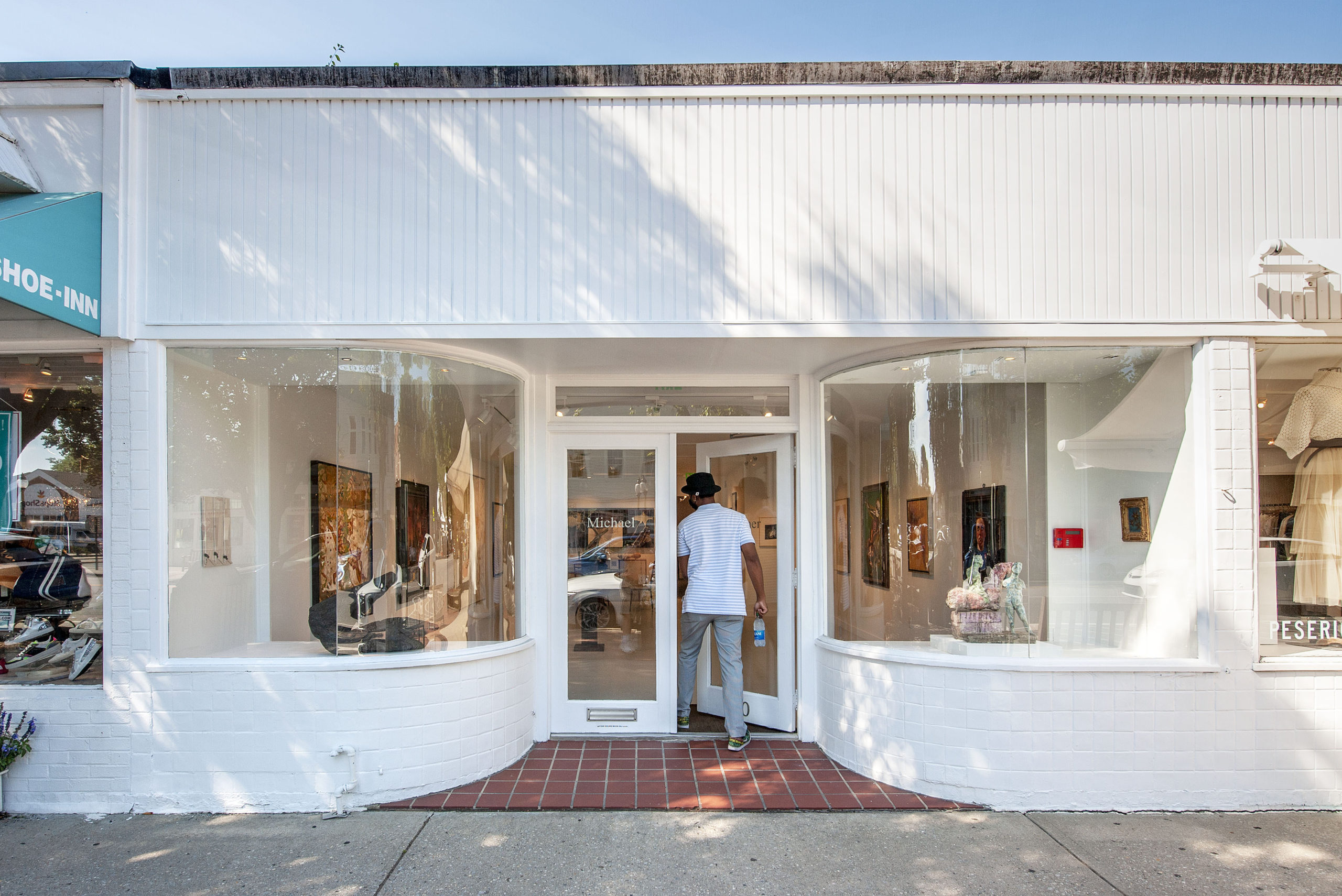 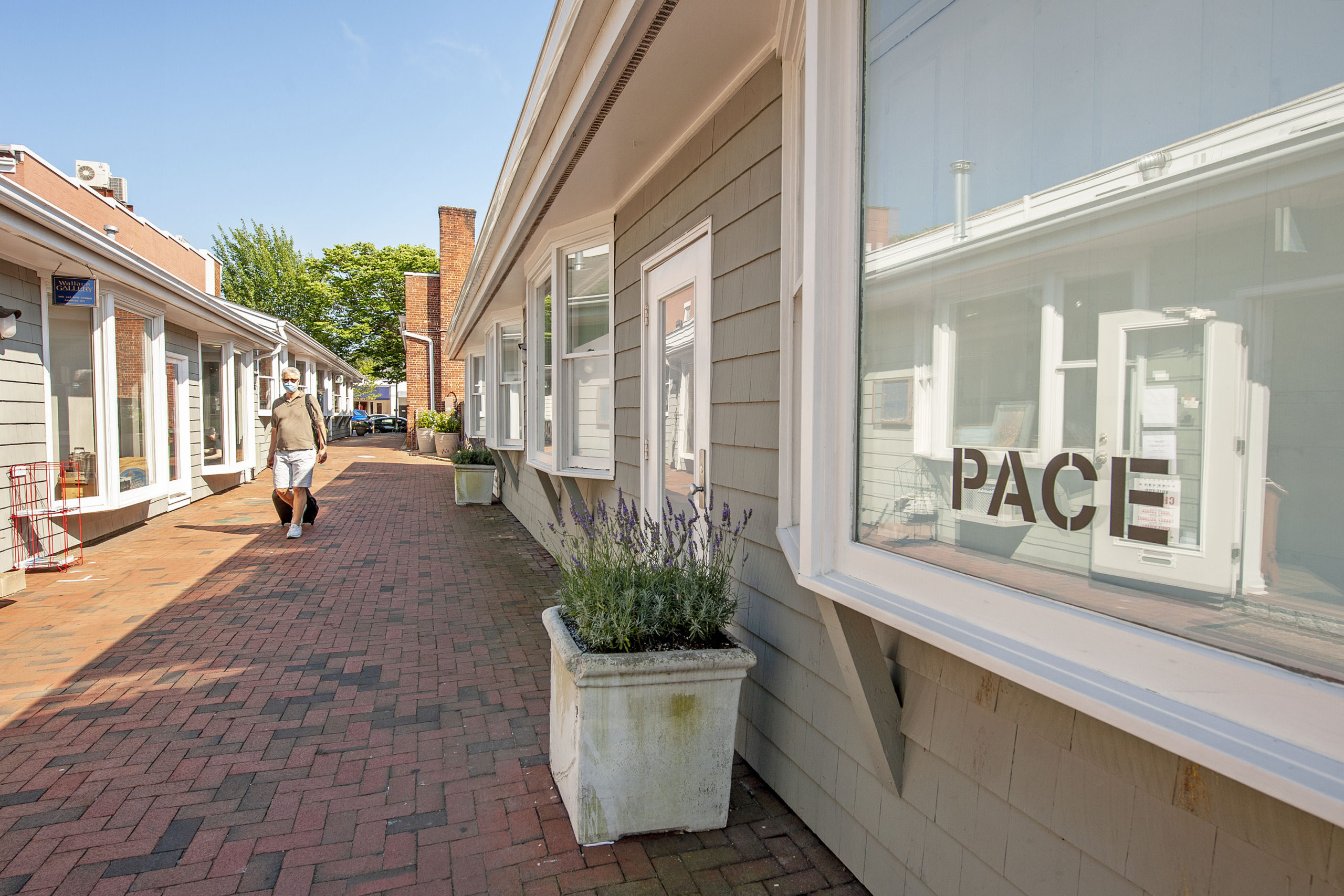 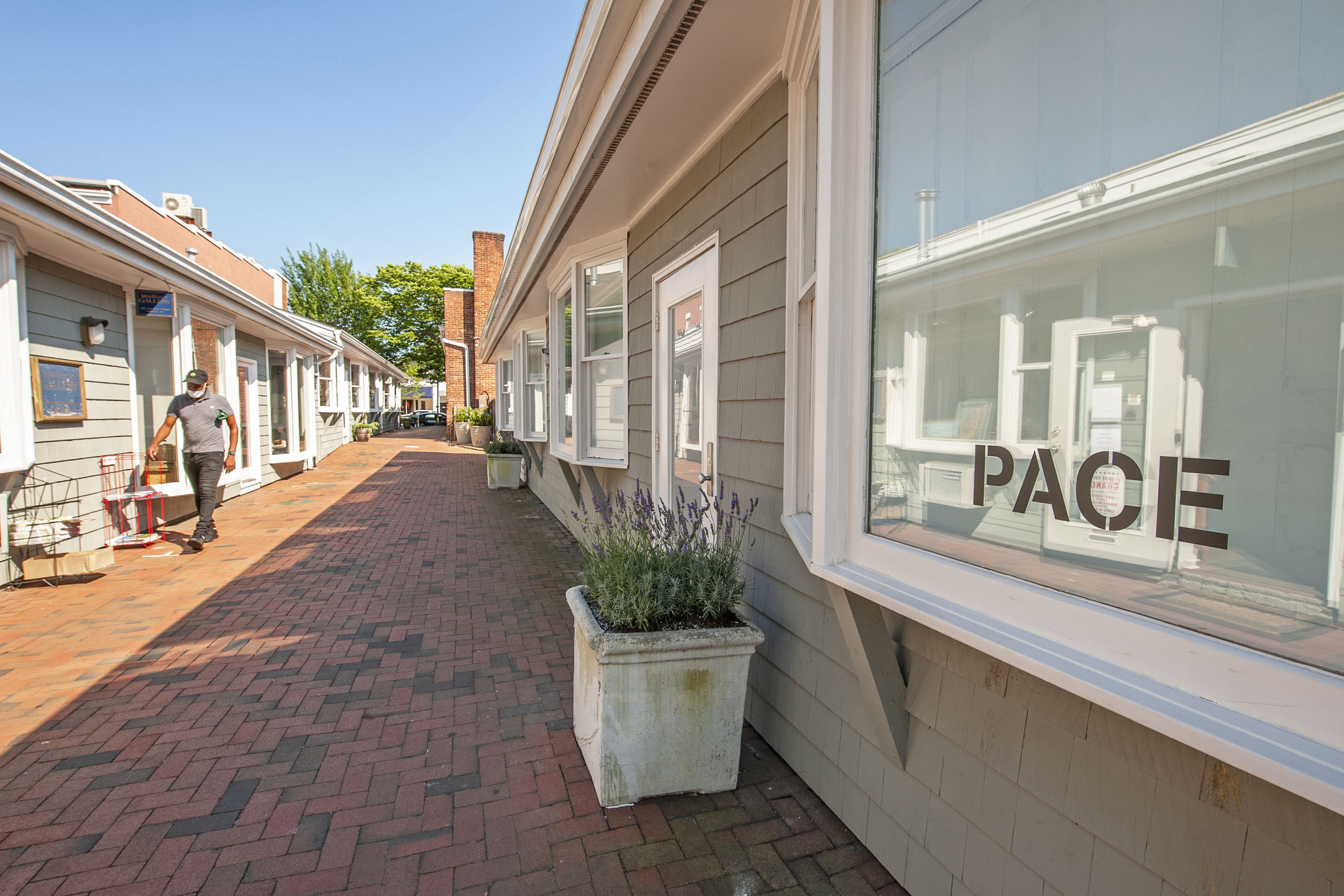 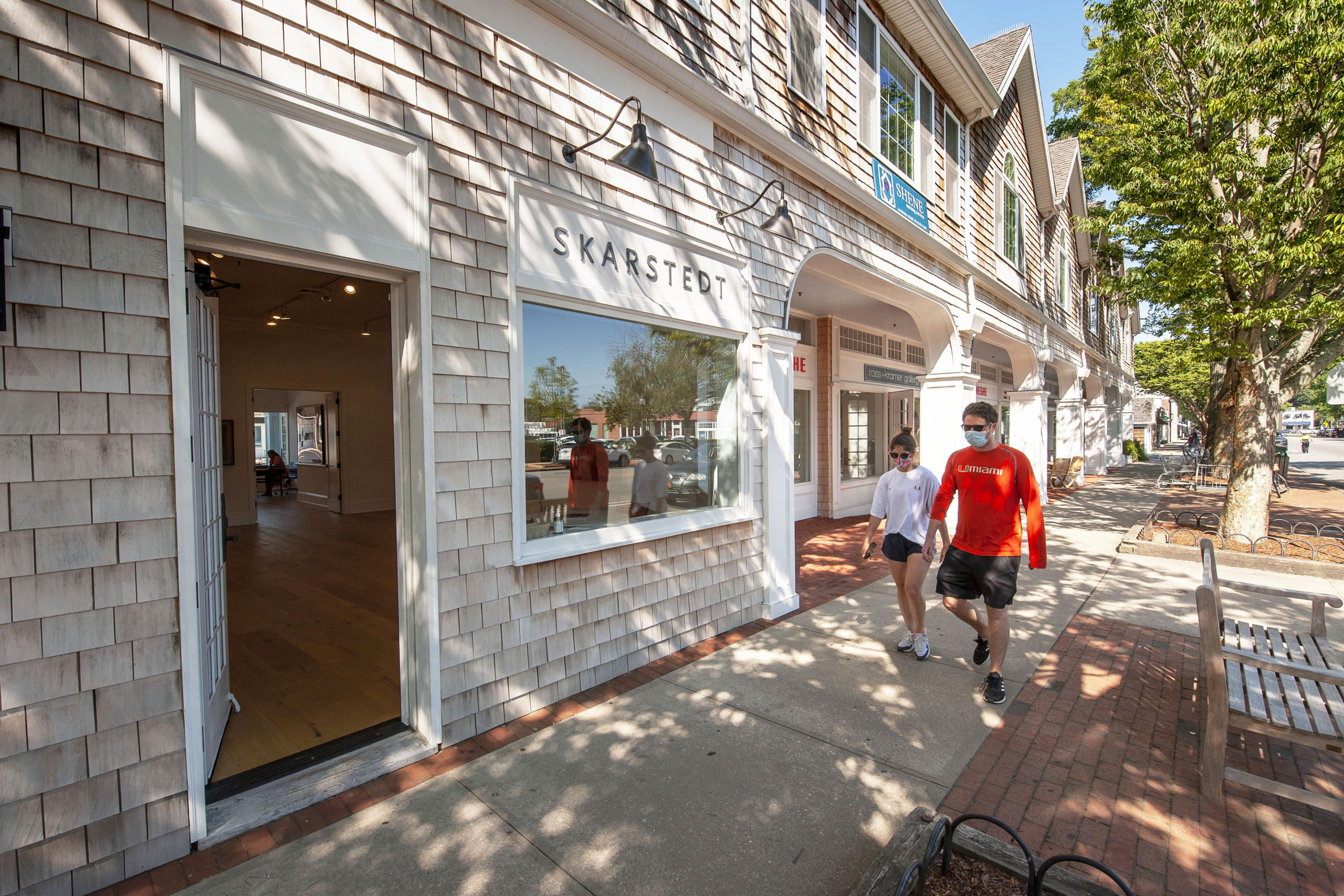 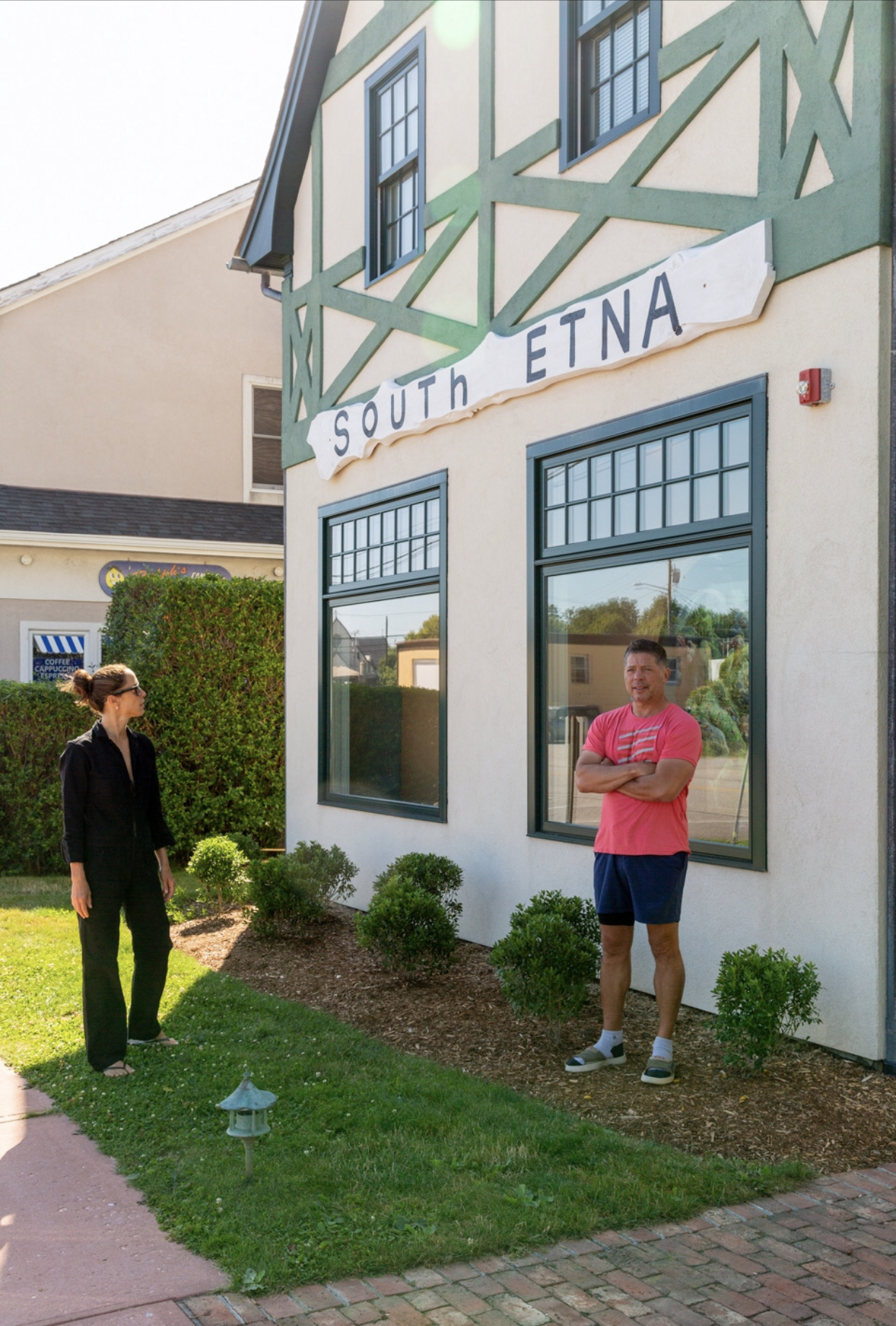 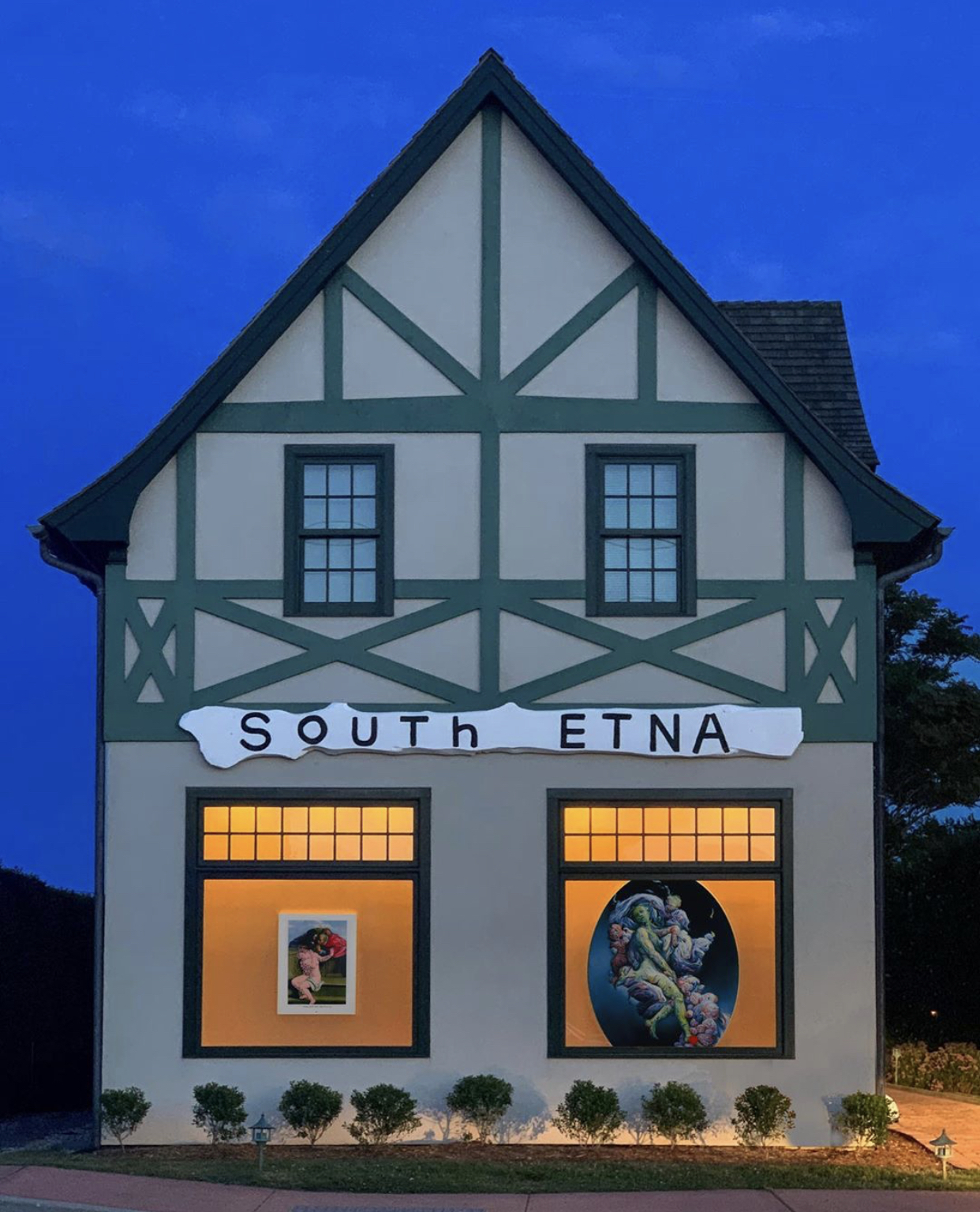 It all began with the art collectors who fled from New York City.

Seeking refuge from the then-epicenter of the COVID-19 pandemic, they hunkered down in their vacation homes on the East End — surrounded by treasured paintings, photographs, drawings and sculpture, waiting for their eventual return to Manhattan’s art scene.

Four months later, that day still hasn’t arrived. So, the art market has come to them — literally.

And it’s about time.

Despite a legacy that includes contemporary giants such as Willem de Kooning, Jackson Pollock, Roy Lichtenstein, Lee Krasner and Robert Rauschenberg — who all famously lived and worked here — high-end New York galleries have largely shunned the East End as a serious year-round art destination, until an international pandemic buoyed it to the surface.

Gone are the days of summertime pop-up galleries, many of the converted newcomers agree. Now, they’re finally here to stay.

“I’d like to say this was one big strategic decision,” said Gordon VeneKlasen, managing partner of Michael Werner Gallery, three days after opening the new East Hampton space. “But in fact, it was sort of an instinctual thing. It seems so obvious now.”

With mega art events canceled worldwide — including Art Basel, Frieze and Art Dubai, to name a few — and Coronavirus forcing gallerists to shutter their doors in New York, a handful have channeled their restlessness into productivity by opening ancillary galleries closer to their patrons in East Hampton, among them Pace, Van de Weghe, Sotheby’s and Skarstedt, all heavy-hitters on the New York stage.

“A number of our clients are spending the summer here,” explained gallery owner Per Skarstedt, whose East Hampton location marks his fourth space. “So we thought, ‘Why not bring the art to them?’”

The shift has the potential to do for the East End what World War II did for 57th Street, according to North Haven-based artist Eric Fischl. When European artists arrived in New York, the competition encouraged American artists to “really up their game,” he said, “which, of course, they ended up doing and surpassing, eclipsing the Europeans.”

“We need that kind of stimulation. I think it’s exciting,” he said. “What’s that saying about ‘high tide raises all boats’? That’s kind of the way I’m imagining it could work, but it also depends on how the community engages it.”

“What I noticed at our opening — and we were amazed by how many people came and their reaction — is that people really miss engaging with art and looking at art in ‘real life’ versus all these online platforms,” she said. “They are very necessary and great tools, but of course, you are detached from the work and it’s just not the same. So there is a real need and it’s coming from an authentic place.”

While the flurry of new galleries on the East End points to “chasing the market,” the surge is more nuanced than that, explained Joe Baptista, vice president of Pace Gallery, which has opened its seventh branch in East Hampton.

“When people begin thinking about art, like market trend or geo-markets, it really turns away, in essence, from what the core values are of my colleagues and myself at Pace, which is to support art for art first — to support art as a way to engage perception and potentially expand upon one’s understanding of the world and each other through that process,” he said.

On Wednesday, the gallery launched a group exhibition bringing together seminal figures who have shaped the past century of art, including de Kooning, Loie Hollowell, James Turrell, John Chamberlain, Mary Corse and Jean Dubuffet, among others.

The show is a discovery, a way to “learn in the intimate way that looking at a physical object does,” he said — an experience he has missed since COVID-19 swallowed up gallery openings and museum exhibitions. He knows his contemporaries feel similarly, including those at other East End outposts, who are rejoicing their return to what they love most.

“I find the spirit behind all of this is one that’s motivated by things that are innately human, which is the want to communicate, the satisfaction that comes from interpersonal dialogue, and the areas of exploration there, as well, that art serves,” he said. “So I feel it’s a sign of passion and drive that the gallery scene is in fact blooming here.”

On Monday afternoon, Marc Payot was gearing up for Hauser & Wirth Southampton’s opening, fully anticipating that art would arrive Thursday and installation would wrap up Friday, allowing for the first private appointments to commence on Saturday, the gallery president said.

With a three-year lease, the Skarstedt space is among the more permanent, while Pace falls on the lower end with programming promised through mid-October. Michael Werner Gallery and South Etna Montauk, who will evaluate whether to stay or go before their time is up in December, fall somewhere in the middle, along with Hauser & Wirth Southampton.

“Our lease is a year, with the possibility to extend, so it’s much more than just a pop-up,” Payot said. “I think it’s really the feeling that, at the moment, we don’t know how long this will last, but we know that can’t just go back to our normal lives like they were before COVID-19. The possibility that this will stay with us for longer than we want is quite high, so I would be very surprised if we would just disappear after a year. The possibility to do business out here is very attractive.”

It wasn’t always for those gallerists who viewed the Hamptons as, solely, a place for relaxation, as was the case for VeneKlasen, a part-time Springs resident for the past three decades.

“I normally travel all year round,” he said. “We go to 10 art fairs, I have a gallery in New York and a gallery in London, and all we do is travel. And so East Hampton has always been my place to hide, to tell the truth. I basically go to Stuart’s Seafood and the farm stands, and don’t come into town at all really, unless my sunglasses get broken.”

He interrupted himself with a laugh. “It’s a very different thing and it was a quick decision, and I’m frankly thrilled about it,” he continued. “It’s been wonderful. But I think you’ll find that from pretty much everybody. It’s the same story.”

For Dayan and her husband, Adam Lindemann, Montauk is a sanctuary for them, too. Having their gallery space — which features a hand-painted sign by artist Julian Schnabel — in such close proximity feels experimental, as does its approach, vision and potential longevity.

“We will all agree that we’re living through a very unusual time, and we really don’t know what the fall and what the winter will bring, and how long we will be here, or go back and forth, so I think it makes sense to have that as a more permanent solution,” she said. “We are, so far, enjoying it very much, and let’s see what the fall brings.”

Baptista said he anticipates the new chapter for East End galleries will reveal itself the longer COVID-19 remains a presence in New York and beyond. “Art scenes everywhere will have a new dynamic,” he said. “It’ll be interesting for us to have an understanding of this in a month or two from now, what this experience is, and see where the world is at, as well. It’s a really interesting moment.”

The gallerists unanimously agree that, while the East End is blossoming as a contender in the global art market, it is not structured to dominate on that scale — or even come close to replacing the closest metropolitan arts scene 100 miles west.

“I really don’t see New York or London, the places I’m really involved, I don’t see those changing as art capitals in the end,” VeneKlasen said. “But right now, New York at least is on pause and in the meantime, this feels like something exciting. And I, for one, really was excited to put up real things and hang them on the wall and have conversations that are not on Zoom. It just doesn’t work, it’s not what our business is about — or at least not my business.”