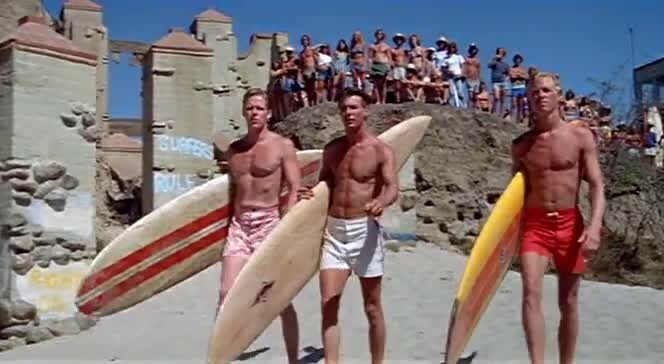 Sag Harbor Cinema’s Drive-in series continues at Havens Beach with films every Sunday night that offer a true salute to the summertime spirit, brought to the comfort of your car.

On August 9, SHC will show “Big Wednesday.” In John Milius’ semi-autobiographical love letter to Malibu’s famous swells, three surfers navigate the waves, growing up, and the Vietnam draft in the mid-‘60s. Milius, who saw surfers as Arthurian knights, penned the script with fellow surfer Denny Aaberg. It was based on their own experiences and of idols of the time (such as Lance Carson, famous for his nose riding). The film portrays the friendship between three passionate surfers — Matt (Jan-Michel Vincent), Jack (William Katt), and Leroy (Gary Busey) — who are trying to catch the perfect wave. “A lot of the characters are me and in another sense none of them are me. It took an awful long time to write the script. It is so very personal. It’s about growing up and relationships and the surf is the exotic background,” said Milius.

“The light, the colors, the air, the heat, the smells, the sounds, the water, the adventure, the romance, the daydreams, the late nights, the everlasting memories, even the scorching asphalt… there is nothing like ‘the feeling of summer.’ And cinema has captured it so well in so many different ways,” says Sag Harbor Cinema artistic director Giulia D’Agnolo Vallan, adding: “To celebrate that feeling seemed like a natural subject for this series. Especially this particular year, and through a program of outdoor screenings.”

Here’s the rest of the line-up:

August 16 — A recent grad (Jesse Eisenberg) is stuck working at Pittsburgh’s local theme park with its quirky crew during the summer of 1987 in Greg Mottola’s bittersweet comedy “Adventureland.”

August 23 — Ridley Scott’s thrilling and unforgettable road movie about two best friends (Geena Davis and Susan Sarandon) on the run from their lives and the police in “Thelma & Louise.”

August 30 — Rob Reiner’s timeless coming-of-age film “Stand by Me,” originally a novel by Stephen King, follows four teenage boys (River Phoenix, Corey Feldman, Wil Wheaton, and Jerry O’Connell) who set off on an adventure through rural Oregon to find the body of a missing boy.

Drive-in tickets are $40 per vehicle and available online only at sagharborcinema.org. Screenings start approximately at 9 p.m. and the park opens at 8:30 p.m. Havens Beach is located just off Bay Street in Sag Harbor.