Street Artist Mitchell Schorr Shows His Many Colors At The Spur 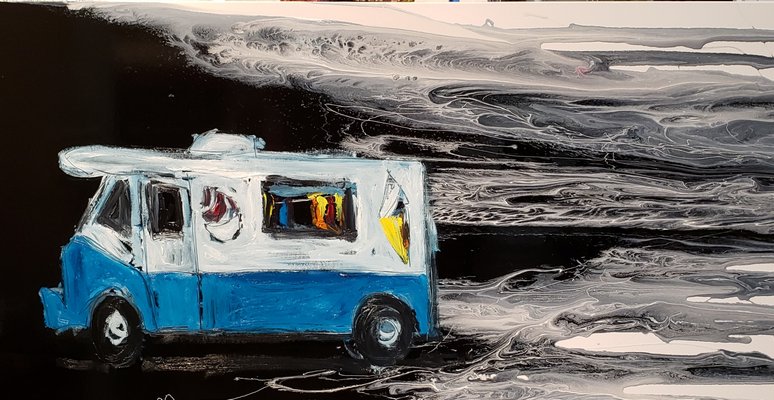 An oil painting of an ice cream truck by Mitchell Schorr. 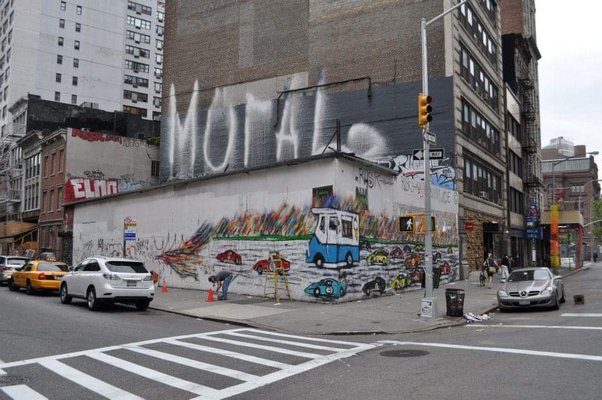 Mitchell Schorr at work on "Da Race" in New York. 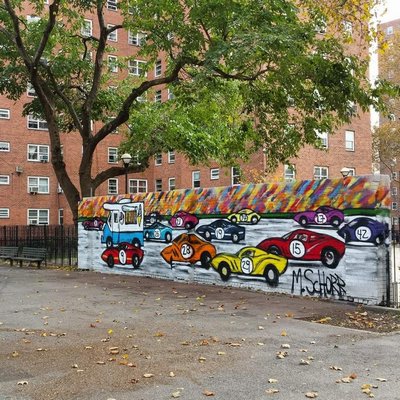 A completed mural of "Da Race" by Mitchell Schorr. 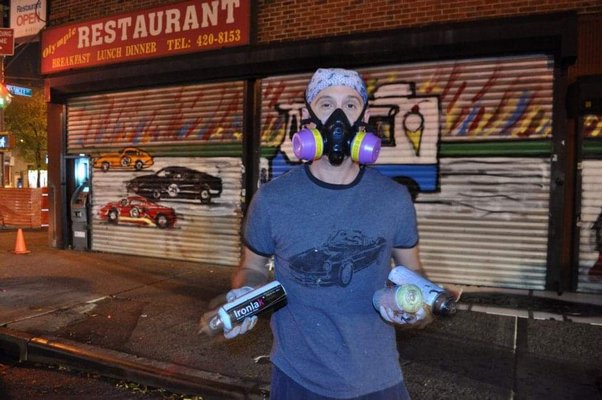 Artist Mitchell Schorr at work on the streets. 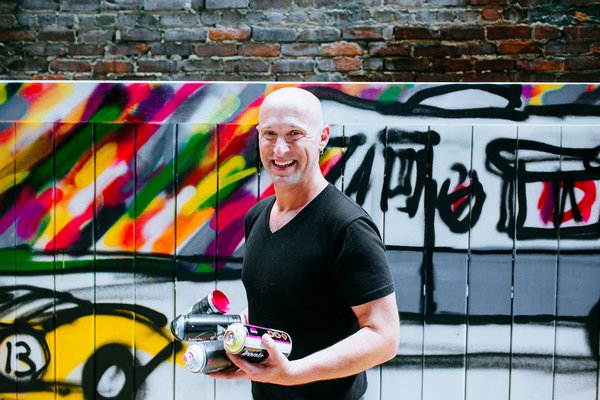 Artist Mitchell Schorr at a New York City event with one of his murals in the background. 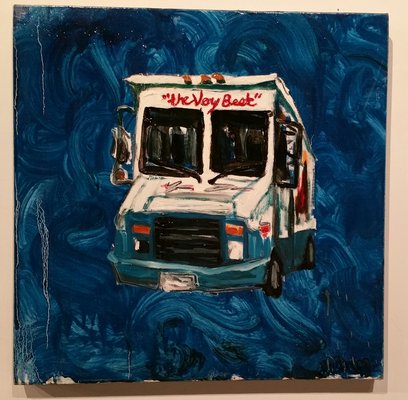 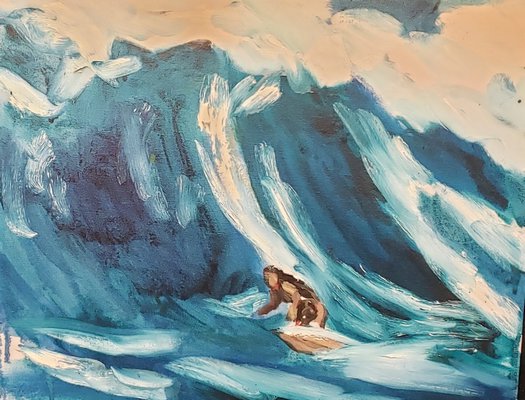 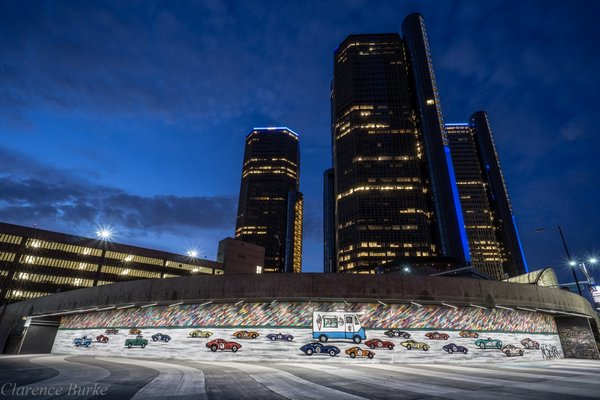 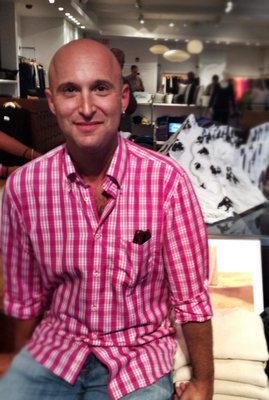 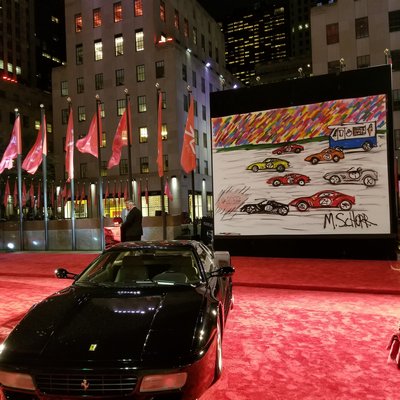 Mitchell Schorr's work on view at a Ferrari exhibtion at Rockefeller Center in New York City. 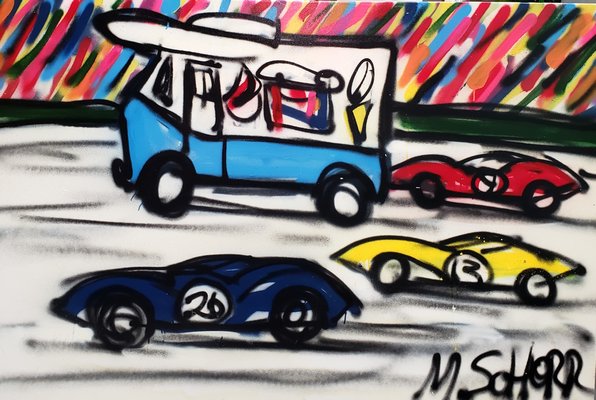 If you want to distill the essence of Mitchell Schorr’s artwork down to just two words, you might try these: “Outside” and “Inside.”

That’s because Mr. Schorr, whose work is currently on view at the Metropolitan Museum of Art’s Mezzanine Gallery as part of the 2019 “Play it Loud” exhibition (that’s an inside show), built his name and reputation as a New York City street artist (which is, of course, outside).

“I specialize in oil painting as well as street art,” said Mr. Schorr, putting it succinctly during a recent phone interview. “When I grew up in the city, there wasn’t a lot art on the street and I wanted to do art on the street.

“Now it’s everywhere again. It’s good to have a lot of art on the street again.”

Mr. Schorr has a studio in New York City, but he lives across the Hudson River, in Tenafly, New Jersey. He notes that in addition to adorning buildings, overpasses and rooftops in New York with his art, he was also painting throughout Miami’s famed Wynwood Walls neighborhood long before it became known as a destination for the world's greatest graffiti and street artists.

In recent weeks, Mr. Schorr’s artwork, both the outside and inside variety, have been on view locally at The Spur in Southampton. “Schorr At The Seashore: Ice Cream, Cars & Waves,” is an exhibition featuring a wide array of the artist’s work, including his newest, deconstructed abstract paintings, as well as imagery from “Da Race,” his iconic ice cream truck and race car street art series that graces walls and façades around the globe.

From the streets of Hong Kong, New York and Detroit, to the pastoral fields of rural Vermont, “Da Race” is recognizable the world over and can be found beneath overpasses, on walls, abandoned buildings, adorning the sides of barns, and not long ago, even featured at a Ferrari exhibition in the plaza at Rockefeller Center.

The murals consist of a series of colorful racing cars rendered in a playful, child-like style. Each car is identified by a different number and they zoom across the landscape as they battle for first place. Fans of Mr. Schorr’s work know to check and see which car is in the lead at any given site. They also know that always, smack dab in the middle of the crowded field, will be an ice cream truck battling it out for position.

Call it Mr. Schorr’s ode to all things childhood.

“The ice cream truck is about the memory of being a kid. My memories were, ‘Here, have some ice cream,’” Mr. Schorr recalled. “It was really parents giving you money. Memories of happy times and something fun. I feel people’s memories are so important, and especially good memories are everything related to our lives as a kid.

“I’m happy if I can bring back some better memories for people.”

Mr. Schorr explained that the series is called “Da Race” not only because the viewer interacts with the works by making a mental note of which car is in the lead and which is likely to win on the next wall, but because the creation of the pieces is completed so quickly.

“It’s a race because I paint these massive pieces in an hour and a half,” said Mr. Schorr, who prefers to create his street art in the early morning hours and is always watching his back. “At this point, I try to do things that are allowed to be done. I always sign my work.”

As far as the inside art, in addition to his abstract work, other subjects explored by Mr. Schorr through his oil paintings include surfing scenes, race horses, sports legends, and serious sports cars.

“I do oil paintings of cars that are totally different than the murals,” he said. “They’re not as playful and kid-like.”

Like the ice cream truck, Mr. Schorr feels that cars play an important role in the memory center of people.

“I believe everyone has a memory related to the car. It could be the first car they owned and the one they fell in love with. There’s also some bad memories, like crashes.”

He’s also known for painting renown chefs like David Burke in his “Hot in the Kitchen” series, which grew from “It Comes from the Crate,” a series of paintings in which wooden produce crates became his canvas to showcase brightly colored foods hued food stuffs. His collaboration with Mr. Burke came after his produce imagery debuted at the Greenhouse Gallery of The James Beard Foundation.

Passion and connection to deep emotion and memory has been the driving force behind much of Mr. Schorr’s inspiration. It would also seem that by following those cues, he’s been able to create work that taps into the emotional core of audiences as well, which is not a bad thing for art to do.

“I think I’m fortunate,” Mr. Schorr said. “In the way the art world is now, there’s more competition at every level. But that’s not what art is. You make what you feel.”

Like his chef and crate series, food plays something of a role in “Schorr At The Seashore” as well, in that The Spur has partnered with local ice cream shops to participate in the exhibition. The show is open to the public every day after 5 p.m. and East End ice cream purveyors Sip N Soda in Southampton, Big Olaf in Sag Harbor, and Candy Kitchen in Bridgehampton, have been on hand at The Spur to serve free ice cream to all guests, with tasters invited to vote for their favorite.

On Saturday, August 17, from 4 to 6 p.m. The Spur hosts a family friendly closing event with an auction of Mr. Schorr’s drawings. Fifty percent of the proceeds from the auction will go to the ice cream shop garnering the most votes throughout the run of the show, and the owners of the winning shop will donate the money to a charity of their choice.

The Spur is located adjacent to the Southampton Train Station at Elm Street and Powell Avenue. For details, visit thespur.com.