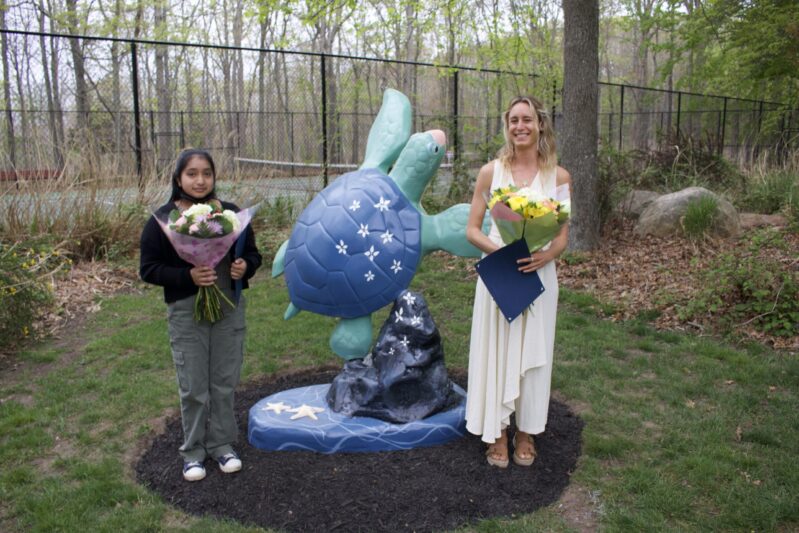 The Village of North Haven unveiled a sea turtle statue outside Village Hall on May 14. The turtle was custom painted by local artists Rosy Hernandez, left, and Melody Guini. PETER BOODY

For the little Village of North Haven, it was a big turnout: Sixty-three people gathered outside Village Hall on Saturday, May 14, for the unveiling of a sea turtle statue that two local artists, Melody Guini and 12-year-old Pierson sixth-grader Rosy Hernandez, teamed up to custom paint in aquatic hues.

What’s a sea turtle statue doing in North Haven? As Mayor Jeff Sander pointed out at the ceremony, sea turtles do inhabit local waters and, in sudden chilly weather, they can suffer cold shock and wind up stranded on the beach. The mayor himself has seen them and called the New York Marine Rescue Center in Riverhead to help them, he said.

As for the statue, it’s one of six that the Marine Rescue Center has given to six communities on Long Island under a $75,000 grant from the Empire State Division of Tourism. As the center’s executive director, Danielle Perillo, explained at Saturday’s event, the goal is to increase awareness of the Marine Rescue Center and its work saving stranded and distressed sea turtles and seals, as well as to boost tourism.

Another of the statues, which are made of fiberglass, has gone to the Town of Southampton for installation at Tiana Beach in Hampton Bays, with an unveiling expected in July. Others are going to Port Jefferson, Long Beach, Hempstead and Westhampton Beach. North Haven’s is the first to be painted, installed and unveiled, according to Perillo.

Village Trustee Dianne Skilbred, who spearheaded the project for North Haven, turned to artist April Gornik — the North Haven resident who, with her husband, Eric Fischl, founded The Church arts center in Sag Harbor — for help finding artists to customize the statue.

Skilbred knew Guini, a surfer with a love of the ocean who spends half the year in Maui, and recommended her as one member of the team. Gornik turned to Marit Molin, founder of the Hamptons Arts Camp, to make the final decisions; the camp operates in summer at The Church. As Molin explained at Saturday’s event, she immediately thought of Rosy, a four-year veteran of the Hamptons Art Camp, describing her as “talented, dedicated and kind — the perfect candidate.”

Guini and Hernandez painted the statue on tarps in the North Haven Village Hall meeting room over the course of two days this spring, with a third day to apply the varnish finish.

Southampton Town Trustee Ann Welker read a certificate of recognition from the Town of Southampton for the two artists’ efforts and their help “promoting awareness of the [marine] center’s important work as well as knowledge of endangered sea turtles.”

“It was a lot of fun doing this project with you,” Hernandez told Guini in her remarks at the event.

Guini said she was “super honored and proud to work with Rosy.”