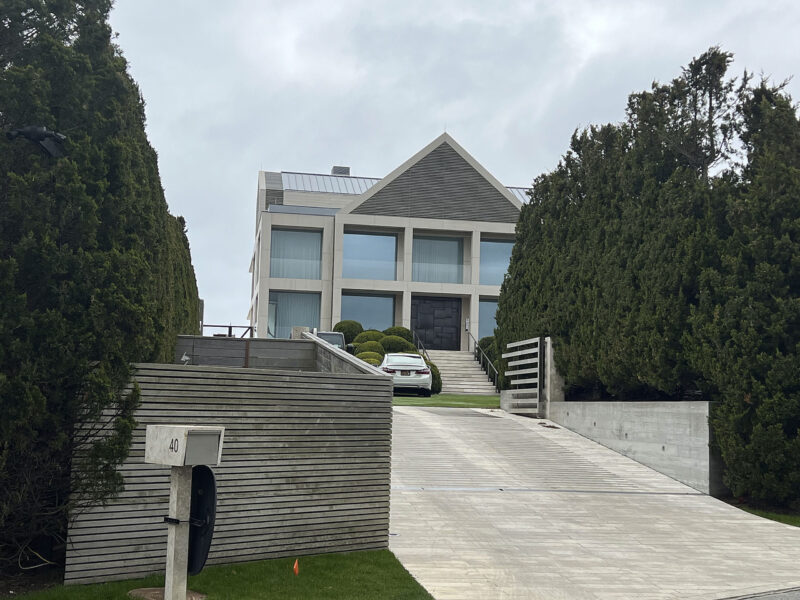 The house at 40 Meadow Lane in Southampton Village.

A request for permission to add an elevator and dormers to an already controversial residence at 40 Meadow Lane has come before the Southampton Village Zoning Board of Appeals, which looked upon the plans unfavorably.

The 6,677-square-foot residence was built in place of a 120-square-foot shingle-style residence over the objections of many village residents and was the subject of a lawsuit in 2014 that tried to reverse its approval; neighbors argued it exceeded the village’s height restriction of 35 feet. The village has since adopted a stricter sky plane law that would prevent the home from being approved today.

After infighting among the previous owners, 40 Meadow Lane changed hands in April 2021 for $42.92 million. The buyer was named as only Smithtown Partners LLC, but the New York Post reported that the identity of the new owner was New England Patriots owner Robert Kraft.

Michael Sendlenski, the attorney representing Smithtown Partners LLC, told the ZBA on April 28 that the owner needs an elevator due to mobility issues and that the dormers are necessary to accommodate the elevator. Asked by the board to explain how the relief sought is not due to a self-created issue, he asserted that having mobility issues cannot be considered a self-created hardship under the test that the ZBA must use when weighing applications.

Sendlenski said the country is well beyond saying that people with mobility issues “aren’t allowed in certain corners of our village or of our town.” He said they are allowed to go anywhere they want to and it is the ZBA’s job to provide a reasonable accommodation.

“I find that kind of far fetched,” ZBA member Susan Stevenson said. Member Luke Ferran added, “I definitely don’t appreciate you insinuating that we would somehow have problems with disabled people.”

Board members objected to the effects the dormers would have on the height of a house they already consider too tall.

Addison Celi has ice in her veins. The Westhampton Beach eighth-grade starting pitcher said she ... 20 May 2022 by Drew Budd

The Westhampton Beach boys lacrosse team felt coming in to this season it had the ... 19 May 2022 by Drew Budd

Four Candidates, All With Experience, Vying For Two Seats On Southampton Village Board

Four candidates are vying for two open seats on the Southampton Village Board in June. ... 18 May 2022 by Cailin Riley

The special master appointed by a Steuben County judge to redraw New York’s State Senate and congressional district maps after the courts tossed out maps drawn by Democratic legislators has completed his work. The new district boundaries, which are expected to be finalized on Friday, take back many of the partisan advantages Democrats had baked into the process when they took over the redistricting task after a nonpartisan commission, made up of equal numbers of Democrats and Republicans, failed to come to a consensus last fall. Locally, the biggest change will be in the 1st Congressional District. Democrats had proposed ... by Stephen J. Kotz

Schools on the South Fork were supported by voters Tuesday night, with budgets approved by wide margins across the board. Sagaponack The Sagaponack School District, which sought to pierce the state tax cap this year with its $1.87 million budget for the 2022-23 school year, was supported unanimously 24-0. Cathy Hatgistavrou was reelected to the School Board with 24 votes. Bridgehampton In Bridgehampton, the district’s $20.95 million budget for 2022-23 was supported by voters, 103-37. A proposition to renew leases on two parcels next to the school for up to three years, for use as part of the district’s agricultural ... by Kathryn G. Menu

Schools on the South Fork were supported by voters Tuesday night, with budgets approved by wide margins across the board. East Hampton  East Hampton residents voted, 186-21, in favor of the school district’s $76.5 million budget for the 2022-23 school year. Community members also approved a proposition to establish a repair reserve fund that would enable the district to save for future repairs, 189 to 19. The creation comes at no additional cost to taxpayers. The repair reserve fund is for emergency use only, and money would only be pulled from it to do things like fix a broken boiler ... by Kathryn G. Menu  And Desiree Keegan

Residents of the Pine Neck neighborhood circled the wagons and came out in passionate opposition ... by Kitty Merrill

Sagaponack Village’s new mayor will not really be new. Bill Tillotson, who served a three-year ... by Cailin Riley