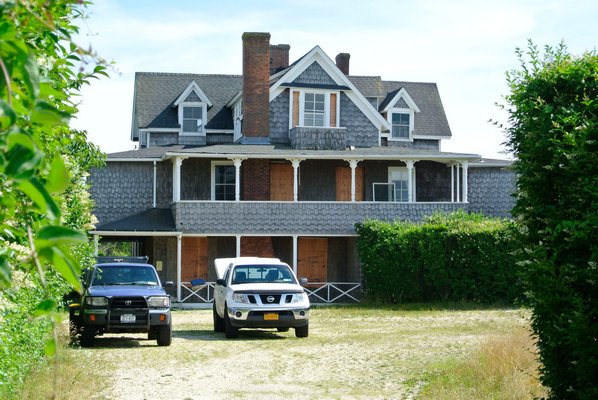 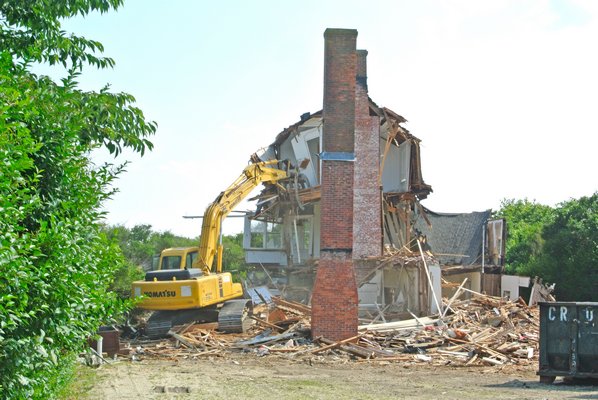 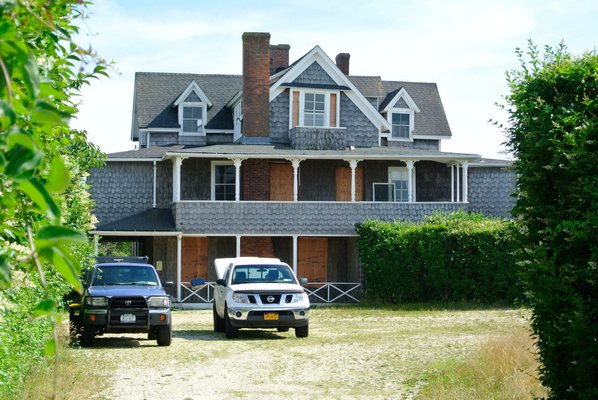 The house at 40 Meadow Lane.

Construction of a house at 40 Meadow Lane, recently approved by Southampton Village officials, has been stalled now that neighbors have launched legal proceedings against the village over the project, saying the design doesn’t fit the village’s historic district.

In a lawsuit filed on October 1, Meadow Lane neighbors Thompson Dean, Caroline Dean and Linda Hackett have asked the court to revoke the certificate of appropriateness granted by the village for the construction of the proposed single-family, two-story home. They also argue that the building exceeds the village’s height restriction of 35 feet.

According to Southampton Village Attorney Beau Robinson, because of the lawsuit, approval of building permits—for excavation or construction of any kind on the property—is forbidden by the court for the time being.

In the lawsuit, the plaintiffs, who are represented by Anthony Guardino of Hauppauge, of the law firm Farrell Fritz, argue against the approval of a modern-style building in the village’s historic district. “Clearly the purpose of a historic district is to preserve its historic character, not to steadily diminish it with modern and other nonconforming buildings,” the document reads. “Moreover, all but one of the nonconforming buildings [in the surrounding area] predated the creation of the historic district—which was created to support the historic character.”

The application, filed by EAM 40 Meadow Lane LLC, is to build a seven-bedroom, 9.5-bathroom house that would rise to 53 feet above sea level and 49 feet above grade—a full 14 feet above the village’s standards—in part because it will be elevated to meet increased Federal Emergency Management Agency flood height requirements. The house, which will be surrounded by shrubbery and trees, will have a zinc roof and glass paneling on all four sides.

The house’s design was approved by the ARB on September 22 in a 3-1 vote, with Hamilton Hoge dissenting and Christine Redding absent. In its written decision, the board said although it recognizes the concerns of the neighbors, they failed to prove that the house design was not consistent with the historic district.

The decision also breaks down the main arguments presented throughout the summer by opponents—mainly, the scale of the house, its incompatibility with the historic district, its materials, and its potential impact on neighbors’ privacy—and explains the ARB’s reasoning in answering those concerns.

In the Article 78 lawsuit, the plaintiffs also claim that the ARB violated the rights of the neighbors by denying them the chance to address the board when new information was presented to the board. The charge is in reference to several hearings, the first of which was on June 11 and was not attended by neighbors, who were unaware that the proposed building was a modern structure. On July 14, the neighbors protested, and the board agreed to reopen a limited public hearing, which was held on August 11. At that time, only specific residents who had voiced concerns in July were allowed to address the board, while others were told the hearing was closed.

“The failure to provide the petitioners and other interested neighbors with an ability to review and comment upon plans that were modified after the last public hearing is a denial of the petitioners’ right to procedural due process, which requires that interested parties be given full and fair opportunity to be heard before a public body,” the legal document states.

This week, the attorney for the applicant, John Bennett of Southampton, filed his opposition with the State Supreme Court, saying the Article 78 is “ridiculous.” The neighbors, he said, do not have historic houses themselves, and both of their homes exceed 35 feet in height.

“This is probably the most hypocritical Article 78 I have seen in my 32 years,” Mr. Bennett said. “They are complaining about the height of the 40 Meadow Lane house, despite the fact that they built their houses under the same interpretation of the law. Their houses are much larger, and they are not historic.”

An Article 78 is a precursor to a full lawsuit that serves to object to a ruling by a government board. After being served, defendants have a short period of time to respond before the suit can move forward.

The lawsuit names the Board of Architectural Review and Historic Preservation, Southampton Village building inspector Jonathan B. Foster, and the homeowners as the defendants.