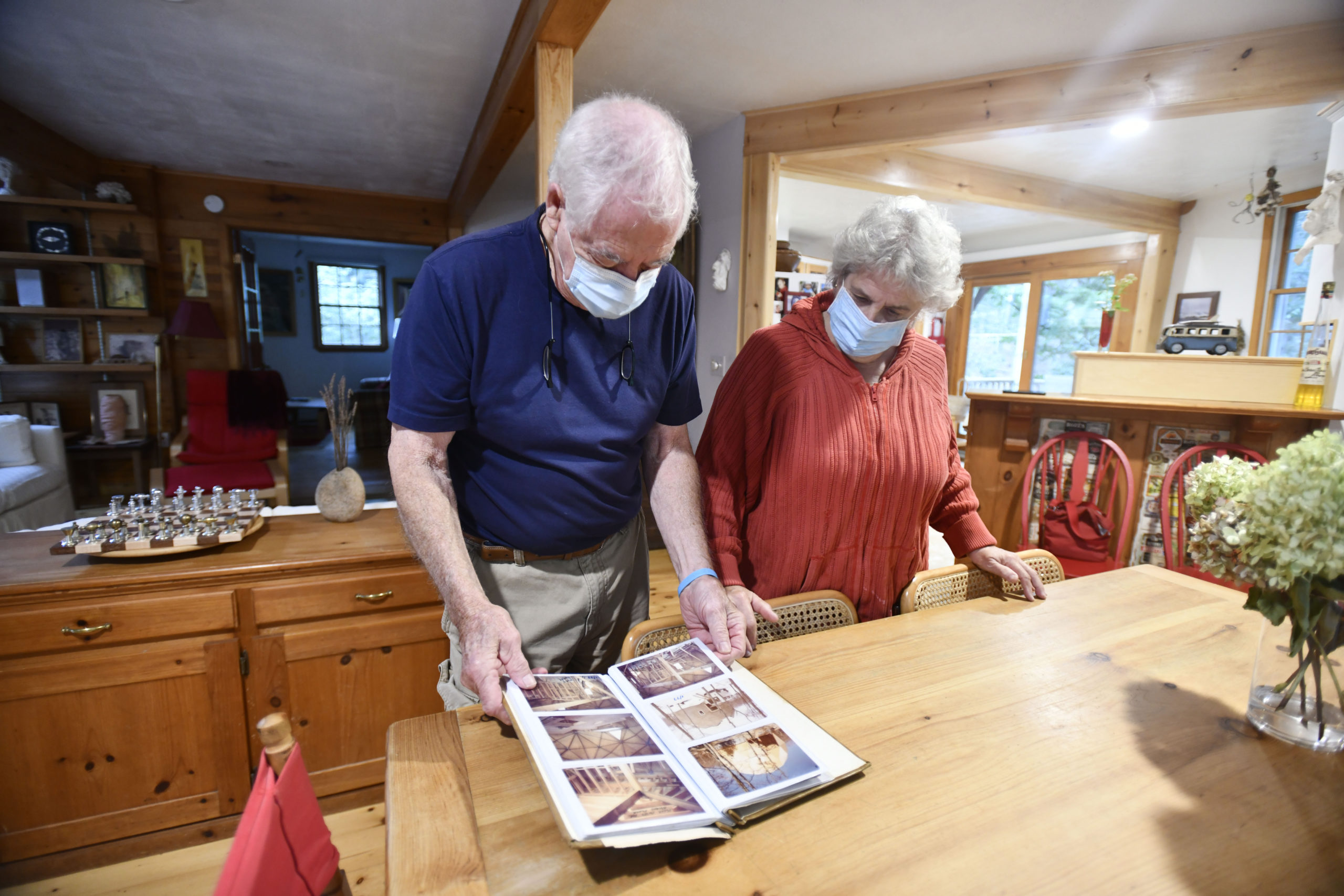 Jim and Jane Baringer look over an album of photos of the house as it was being constructed. DANA SHAW 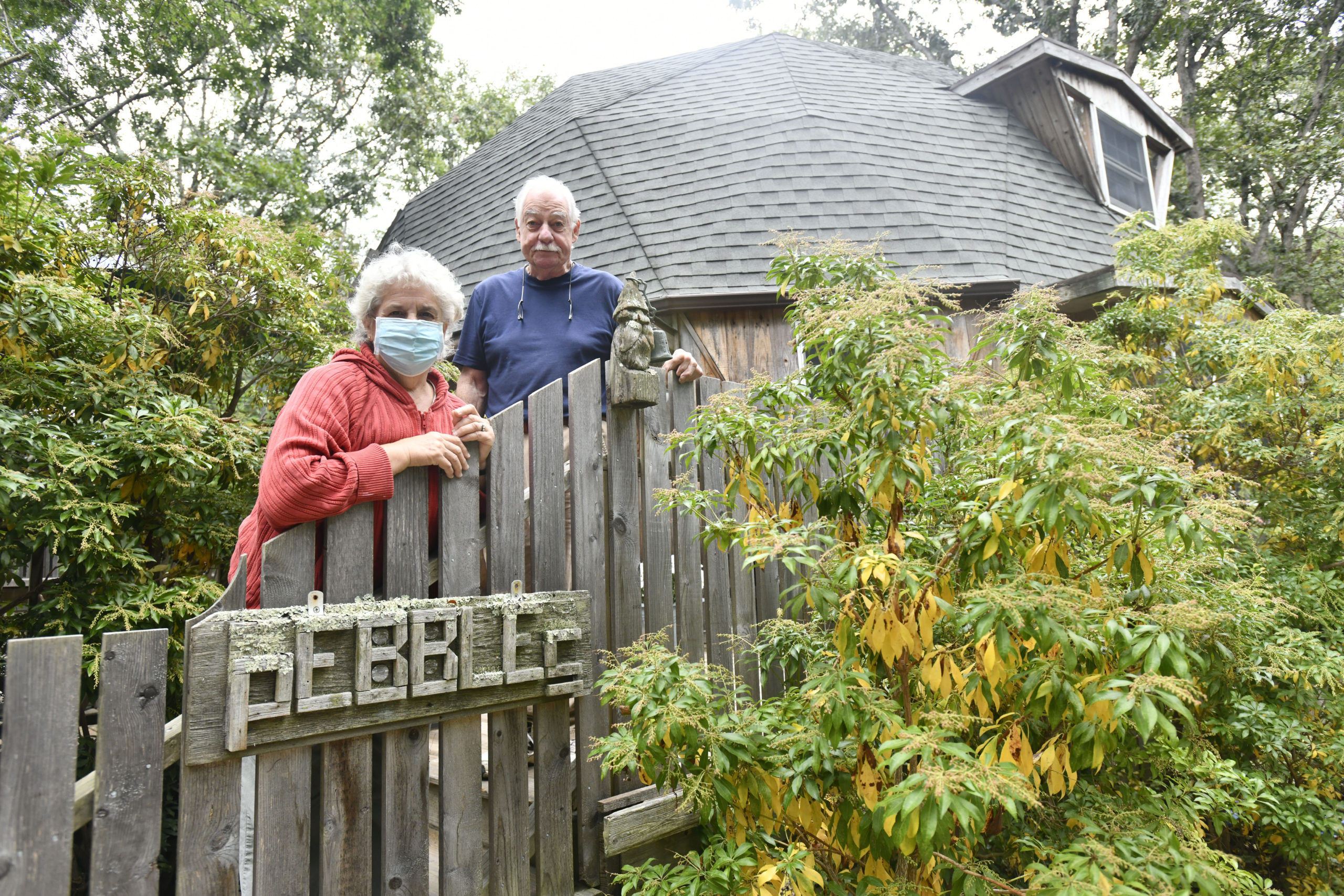 Jane and Jim Beringer at the entrance of their East Hampton home. DANA SHAW 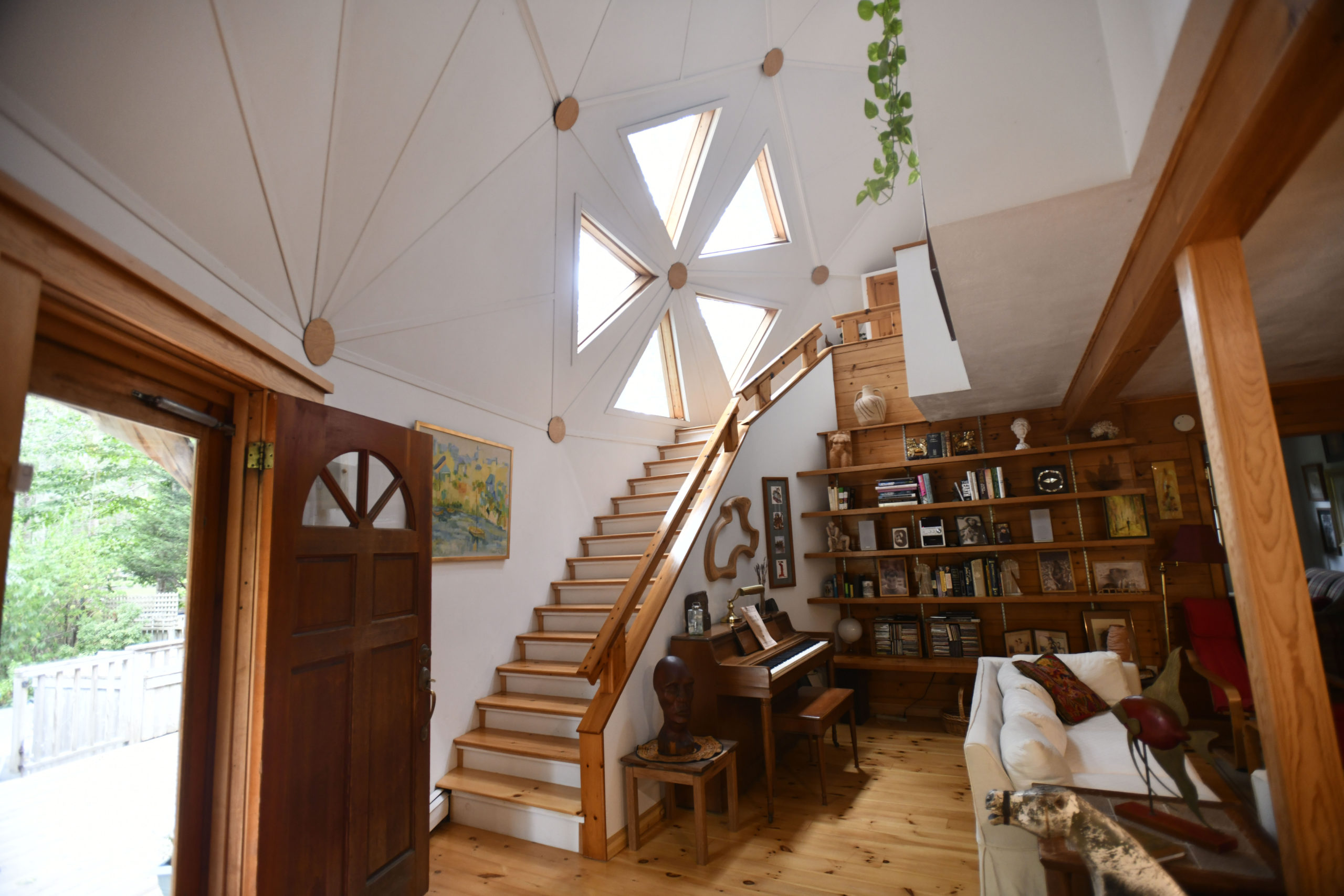 The staircase leading up to the second floor. DANA SHAW 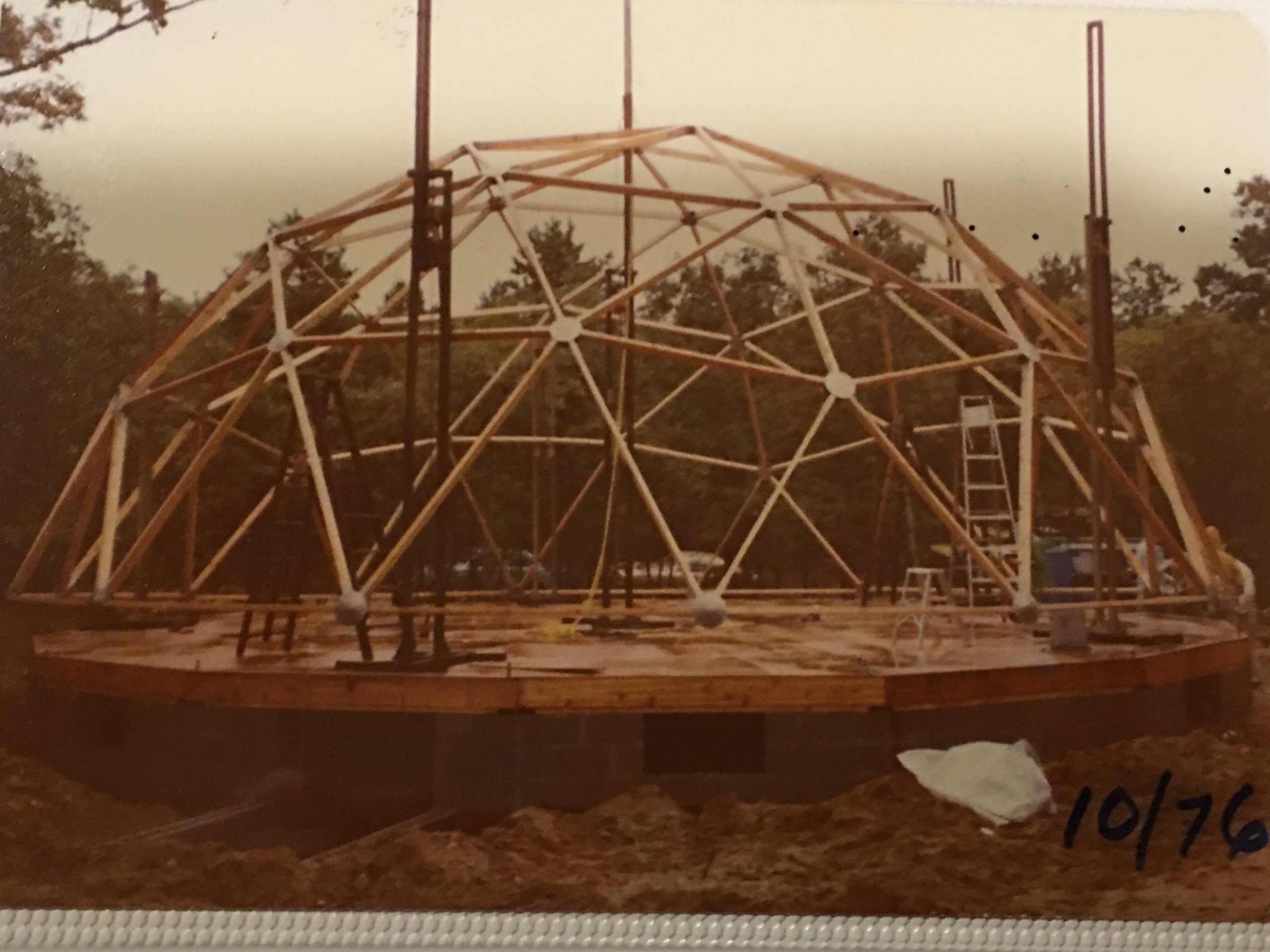 In 1976, the top of the dome was set on pump jacks to be raised. COURTESY JIM BARINGER 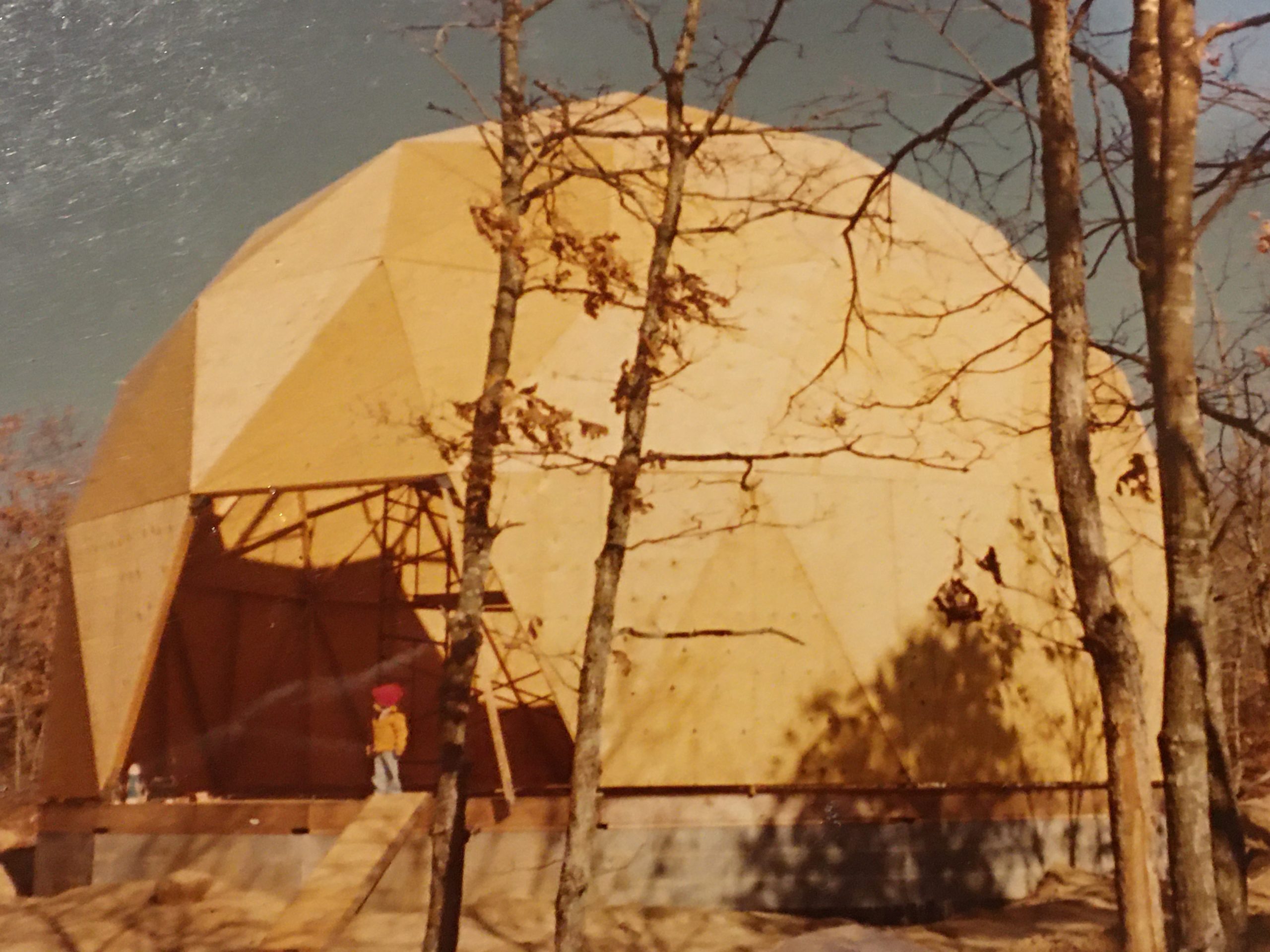 The frame of the dome, enclosed in plywood. COURTESY JIm BARINGER

The geodesic dome design, popularized and patented by architect R. Buckminster Fuller, evenly distributes stresses and loads so that the spherical structure can be made with lightweight materials, while creating a large expanse inside uninterrupted by columns, walls or other supports.

While the design has never entered the mainstream in homebuilding, there have been a handful of geodesic dome homes built on the South Fork by those who wished to live in something unconventional.

Jim Baringer did so 44 years ago in East Hampton and has lived there ever since with his wife, Jane Aberman Baringer.

Though kit houses were available back then for building geodesic domes, Mr. Beringer wanted to build his home from scratch rather than buying off the shelf.

“The geodesic design is basically the same design in all domes: They’re hexagons and pentagons that are tied together,” he said during an interview last week. “They come in different sizes. Mine is a 40-foot diameter.”

Working with select structural kiln-dried fir that he ordered from Oregon, he cut and color-coded all of the two-by-four framing members, called struts, that he’d need to build the dome. For the hubs that joined the struts together to form the geometric shapes, he went to Dome East, a now-defunct company that had been located in Hicksville.

“Once you cut all the members that make up the hexagons and pentagons, you assemble them all into a hub,” he explained. “And you start from the very top, which is a pentagon, and you attach the hexagons and the pentagons all the way around.”

After the foundation was in and the deck was on, it was time to raise the dome. “I got six guys on a very rainy Saturday with five pump jacks, and we put the dome up in six hours,” he recalled.

With the dome lifted, the legs its sits on were built underneath.

Mr. Baringer did the architectural drawings for the house himself and went to Dome East for the engineering stamps. He’s not an architect himself, but he learned how to creating drawings. “My father was a draftsman, so I guess I picked it up from him,” he said.

Mr. Baringer also attended art school in Los Angeles, and he gained construction experience as a set builder. He assembled sets throughout the 1960s and into the early 1970s for movies, such as “Don’t Make Waves” and “The Sting,” and television shows, like “Star Trek” and “I Spy.”

“I was working at Universal Studios in California, and a friend of mine, Roger, was involved in domes, and he had a friend who was building one, and we went to check it out and I fell in love with the space,” he said. “It’s very organic. And when I thought about building our house here, I didn’t want to build a traditional home. I always liked the dome, and I liked the way I felt inside one. … I always felt that straight walls were like blockades that were in your way, whereas with the dome, it flows very nicely.”

After living in Los Angeles together for eight years, he and Ms. Baringer decided they wanted to raise their first child in New York, where she is originally from and where her parents bought an East Hampton house in Settlers Landing.

“When I moved to Long Island, I wanted to build my own house, and I had to learn how to do it,” Mr. Baringer said. “I got jobs in carpentry with builders, and then I started getting my own work, and I just learned as I went to do it myself.”

The Baringers found a half acre for $7,500 in the Northwest Woods area of East Hampton, and that’s where they built their home.

“Stephen Hands Path was a gravel road when we moved here, and our street was called Montauk Avenue at the time, and it was a dirt road that dead-ended at our property,” Mr. Baringer recalled. “It was all woods and just beautiful.”

Now their street is named Wheelock Way — and theirs is the only geodesic dome house still standing in East Hampton.

Mr. Baringer knows of two geodesic domes in Sag Harbor, one in Westhampton, one in Montauk, and two in Southampton — one of which he helped to build.

He said an airline pilot heard he was building a dome and helped him out to learn about it. Mr. Baringer, in turn, helped the pilot, who bought a kit for a dome house.

The first geodesic dome on the South Fork had belonged to Bob Skinner, an art professor at Southampton College, Mr. Baringer said. “He had to send his drawings to Albany. The building inspectors here didn’t know what to make of it.”

That dome was located on Whooping Hollow Road in East Hampton, but it has since been razed by a later owner.

“Bob had a lot of problems with the exterior,” Mr. Baringer said. Neoprene used in the construction caused a lot of condensation to build inside the dome, and the skylights leaked.

Meanwhile, the Baringer house has withstood the test of time. Since it was completed in the 1970s, there have been some changes, including renovations of both the kitchen and bathroom, twice. The staircase has been moved and is open to afford a view to the top of the dome.

“One of the things about the dome is that the interior structures, the walls, are not tied structurally to the exterior, so you can change it all around,” Mr. Baringer noted.

The house has three bedrooms upstairs, and downstairs are one bedroom and a TV room, dining room and kitchen that all flow together. There are 2,300 square feet of living space, not including an open loft where their children had played on a trapeze when they were young.

The house has baseboard heating but also a 500-pound cast iron Vermont Castings wood-burning stove that can heat the whole house. In the summer, when the pentagonal skylights over the stairwell are opened, heat vents right out.

Mr. Baringer said that when the front door and the skylights are open at the same time, it creates a “vortex draft.”

About 15 years ago, they added a pool to make it easier to rent out the house in the summers while they travel.

“This year, we stayed, because we were gonna put the house on the market,” Mr. Baringer said. They intended to ready the house for sale and to enjoy the pool. “Then the stupid pandemic came and our kids couldn’t visit.”

Their three children and their grandchildren all live in New England — New Hampshire, Maine and Massachusetts — and the Baringers plan to move closer to them. “If it sells, then were out of here, off to a new adventure,” Mr. Baringer said.

Located at 36 Wheelock Way, East Hampton, the house is on the market for $895,000 with Sotheby’s International Realty.