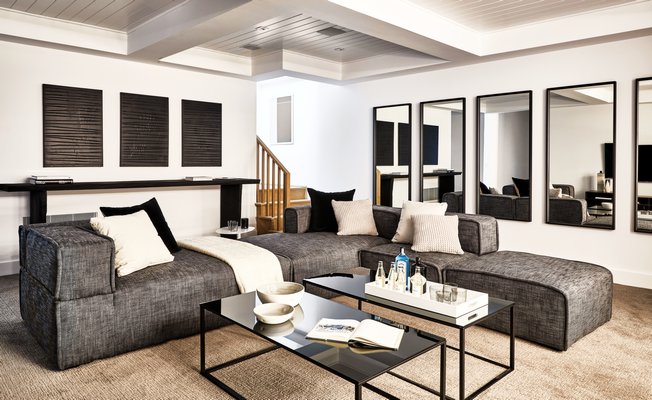 The perceived size of a basement level media room in North Haven is expanded by a series of full-length mirrors. CHRISTIAN HARDER 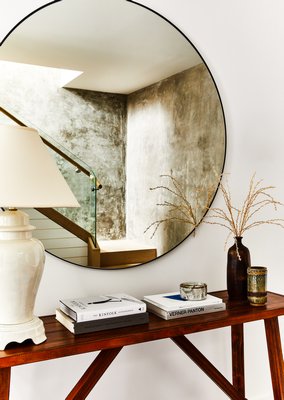 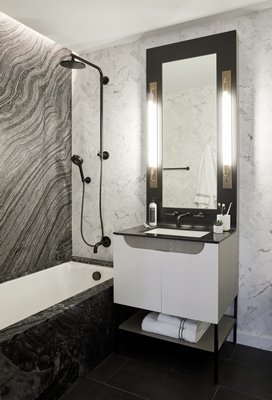 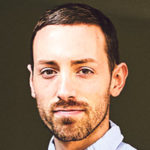 Mirrors are by far one of the most versatile items in every interior decorator’s arsenal.

While they can be produced in countless shapes and sizes, wall mirrors in particular are often overlooked in favor of other wall decorations such as artwork or objects — and understandably so, since they are essentially simply a reflection of what is around them. In an East End home, however, carefully selected mirrors in varying styles and forms play a pivotal role in the overall experience and completion of a space, by providing a functional enhancement and finishing touch.

In terms of purpose, most people would agree that the primary reason for installing most mirrors is to look at oneself, so typically they are most concentrated in spaces where one’s reflection is important: a bathroom, a closet and an entry hall. These will be referred to as “personal” mirrors.

However, mirrors can also reflect light and views, to an extent. We can call these “reflective” mirrors. While most mirrors made for the home are imperfect and thus absorb a certain proportion of the light they receive, when strategically placed nearby a window or skylight that receives direct sunlight at certain times of the day, they can be effective in brightening up a space, even if temporarily. This same logic could be applied to after-hours reflection, if they are positioned within the range of a spotlight or bright lightbulb of some kind. In both instances, though, it’s best to beware of the glare and note that the brightening impact will be fairly minimal if no light is directly reflecting on the surface.

Additionally, mirrors can be used as an illusion to help a room feel larger than it truly is, by giving viewers something to look into and beyond the four (or more — or less!) walls surrounding them. These can be considered “illusive” mirrors and are particularly useful in smaller homes like a Sag Harbor whaling cottage.

Regarding placement, for personal mirrors, be sure to incorporate them in a place that is easy to use. It’s practically mandatory for most bathrooms today to have a partial, facially oriented mirror positioned over the sink basin, for tooth-brushing, etc., and for obvious reasons. For closets (or bedrooms, depending on whether a walk-in is available or not), a full-length mirror should have at least a few feet of clear floor space in front of it so one can fully appreciate his or her outfit. In entry halls, a medium or larger mirror over an entry console, hung fairly close to waist height, can provide a nice final look at the majority of one’s ensemble before heading out of the door, but keep in mind that typically one’s lower half view will be limited unless a full-length mirror is provided.

For reflective mirrors, be sure to check the surrounding natural and artificial light sources to maximize the effect. In general, rooms that face north do not have too much to benefit from this strategy for daytime reflection, so focus on southern, eastern, and western facing rooms. Consider one’s daily schedule in selection: unless one is an early bird, it’s probably not very useful to enhance the morning light too much as the sun rises well before many start their day, especially when on a relaxing getaway. On the contrary, for someone who is hosting visitors from the city for a short weekend, mirrors in a western facing room could help the day feel a little bit longer, especially during the fall and winter months. And, when a water view is present, by all means find a way to appreciate it from more positions than just in front of the window by hanging this kind of a well-placed mirror. In all cases, it’s helpful to lean one closer to its final position before installing — when possible to do so safely — in order to test out the effect before a commitment (read: wall damage) is made.

For illusive mirrors, I always recommend placing these on the walls that are less suited for artwork, but they can ultimately be successful when hung virtually anywhere, notably even behind furniture since their primary purpose is not to see oneself anyway, but rather, provide an overall effect. They are also perfect for that odd, somewhat common wall type that’s both too small for meaningful furniture, but also too big for one’s art.

As far as scale is concerned, personal mirrors typically are the smallest of the three categories explored here. They are usually experienced fairly up close and personal, and should be sized for their use. One caveat is the bathroom mirror: For example, while one’s face is usually the primary reflected target, there is also something to be said in defense of pool houses having full-length mirrors in their bathrooms (or changing rooms). When one is spending a lazy weekend day enjoying the summer sun in a bathing suit, it’s nice to be able to do a full outfit check before heading outside, and after heading back in.

For reflective mirrors, scale varies considerably depending on the natural and artificial light reflections. Be mindful of the time of year, given that the famous East End summer sun enters one’s home at a much higher angle than the winter sun, which ironically (but thankfully) enters a room more deeply, trees and conditions outside depending. For this reason, mirrors that have a significant height may reflect light on more days throughout the year, and mirrors with significant width may reflect light for more time throughout the day.

For illusive mirrors, bigger is generally almost always better. While a small porthole mirror — as popular as they might be in the Hamptons — can be an interesting touch in a variety of spaces, it likely won’t have any real impact on perceived scale. Instead, opt for its large-diameter cousins to help a room feel a bit deeper than it truly is. For large walls where art is otherwise prohibitive, consider a series of matching mirrors to create a significant expanding effect.

When it comes to style, personal mirrors tend to have the most options and are frequently the most luxurious. Especially in the Hamptons, mirrors inspired by seafaring endeavors or otherwise found on boating vessels are particularly effective. Natural materials like shells or rattan can provide a perfect border for a summer home. Reflective mirrors generally follow the same principles as personal mirrors, but tend to be a little larger and simpler in form, and especially in shape — rectilinear tends to be the most popular. Illusive mirrors are best provided in minimal forms with less ornamentation; after all, their purpose is not really to be looked at, but rather, looked through.

Wherever you’re looking lately, it seems clear that there’s a growing penchant for sumptuous, curved ... 22 May 2021 by Andrew Bowen

Chairs are, without a question, a favorite of decorators and collectors alike. They often present ... 14 Sep 2020 by Andrew Bowen

Think about it: You arrive at home after a strenuous drive in bumper-to-bumper traffic on ... 14 Feb 2020 by Andrew Bowen

Bedding, Where Comfort And Style Meet

Bedding is an unavoidable necessity in virtually all homes, but it is arguably one of ... 30 Nov 2019 by Andrew Bowen

Appropriate Lighting Inside The Home Is A Bright Idea

There are few moments more enjoyable than a lazy Saturday evening in the Hamptons, winding ... 6 Aug 2019 by Staff Writer