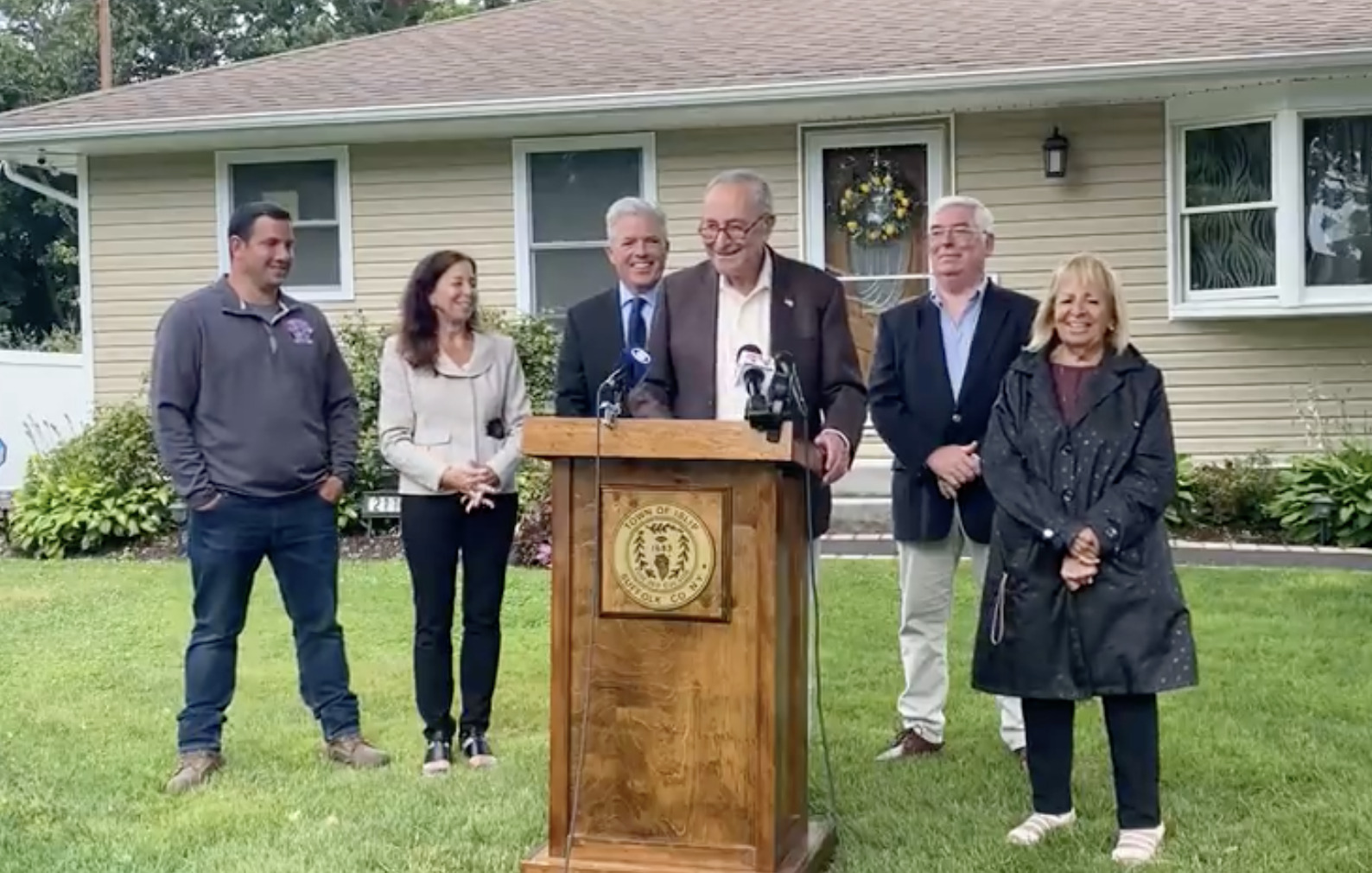 U.S. Senator Charles Schumer is asking the U.S. Department of Agriculture to stop the IRS from subjecting homeowners to income tax on septic improvement grants.

From the lawn of an East Islip home on Monday, Schumer said he is sending a letter to Secretary of Agriculture Tom Vilsack to ask the USDA to use its authority to determine that grants that are primarily designed to conserve water and soil resources can’t be considered taxable income.

“If the USDA simply sends a letter to the IRS to do that, there won’t be any taxes,” Schumer said.

The Suffolk County Septic Improvement Program and similar initiatives in Southampton and East Hampton towns award grants to replace cesspools and conventional septic systems with innovative/alternative septic systems that use the latest nitrogen-reduction technology to curtail the flow of nutrient pollution into Long Island’s waterways.

The grant monies are distributed directly to the installers, rather than the homeowners themselves, to avoid triggering an income tax liability for the homeowners. However, after Suffolk County Comptroller John Kennedy asked for an IRS determination, the federal tax collection agency ruled in 2020 that both the homeowners and the installers are responsible to pay taxes on the grants.

“The IRS recently decided to consider voluntary septic tank upgrades as personal income,” Schumer said. “They never used to do that.”

Some homeowners on the South Fork were left with unexpected tax bills for thousands of dollars, which discouraged other residents from participating. Local and federal lawmakers asked the IRS to reconsider, and federal legislation was floated to reverse the decision. None of the previous efforts were successful.

“Right now, with so much confusion under the threat of big bills from the IRS, people aren’t gonna do this,” Schumer said. “They’re gonna say, ‘Don’t hook me up because I’ll have to pay taxes.’”

He called it “ridiculous” that homeowners who are participating in a program to clean up water would be subject to taxes.

“The grant program is a regional benefit,” he said. “It helps the whole community.”

He also noted that the contractors who install the I/A systems also pay taxes on the value of the grants. “So the feds aren’t out a dime the way I see it,” he added.

Schumer said he and others who have been working on this issue previously thought they had a breakthrough with the IRS. “We thought they had said OK, but then all of a sudden, they reversed themselves for reasons unknown,” he said. “So we’re gonna pull a rabbit out of a hat. We have a new way to go around the IRS. It’s called the U.S. Department of Agriculture.”

He said he wrote a letter to the USDA that lays out how the department has the right to determine that soil and water conservation grants be excluded from taxable income. The letter also states that Suffolk County first engaged the USDA in 2021 to seek a determination.

As soon as the USDA were to make the determination and write to the IRS, according to Schumer, “all our problems would be over and we could continue to proceed with this great program.”

“This program doesn’t work if you don’t have homeowners who are willing to sign on and participate,” said Suffolk County Executive Steve Bellone, who joined Schumer at the announcement. He called the Septic Improvement Program “absolutely critical” to protect Long Island’s water and ensure a prosperous future.

Adrienne Esposito, the executive director of Citizens Campaign for the Environment, said taxes on the grants put them out of reach for working-class people.

“Red tide, green tide, brown tide, mahogany tide, rust tide, blue-green algae are really destroying our maritime culture and our way of life here on Long Island, ” Esposito said. “This program was specifically crafted to help working-class Long Islanders participate in the program. It was intended to be good for our wallets, good for the environment, and good for the sustainability of our island. The IRS thwarted that program and hindered our progress, and that must change.”

Louis Castronova, the owner of the home where the press conference was held, said his story began when his cesspool collapsed at 3 a.m., with a 2-year-old and newborn in the house. He said an internet search led him to the Septic Improvement Program, and he filled out the short application.

“It was something to help a middle-class family that was really in dire need of something in a time of an emergency,” Castronova said. But he added that a couple of months later, in tax season, he found out he owed between $4,000 and $5,000 in taxes.

Bellone said 3,200 families have participated in Suffolk County’s program, and he echoed Castronova’s remarks that the best advocates for the program are the families who have participated in it. “The problem is that this tax burden, which is inexplicable, is hurting the ability of people like Louis to go out and promote the benefits of this program,” he said.