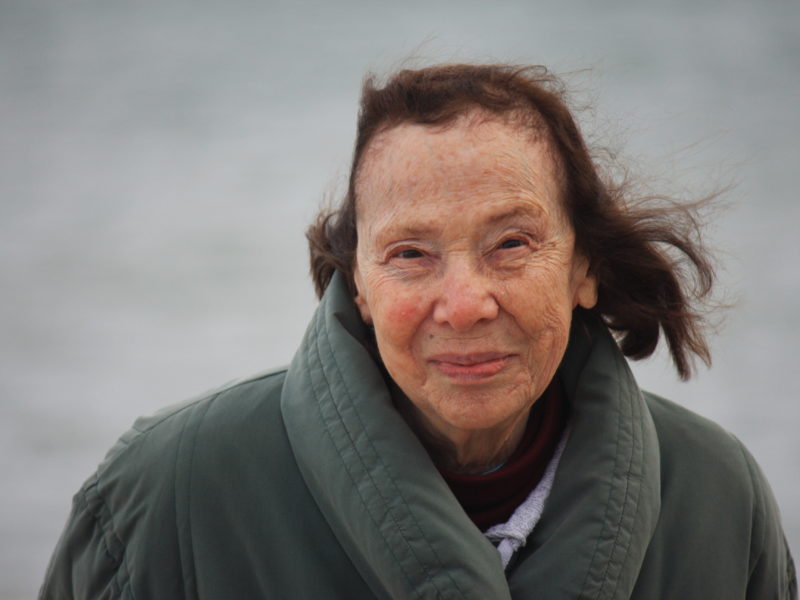 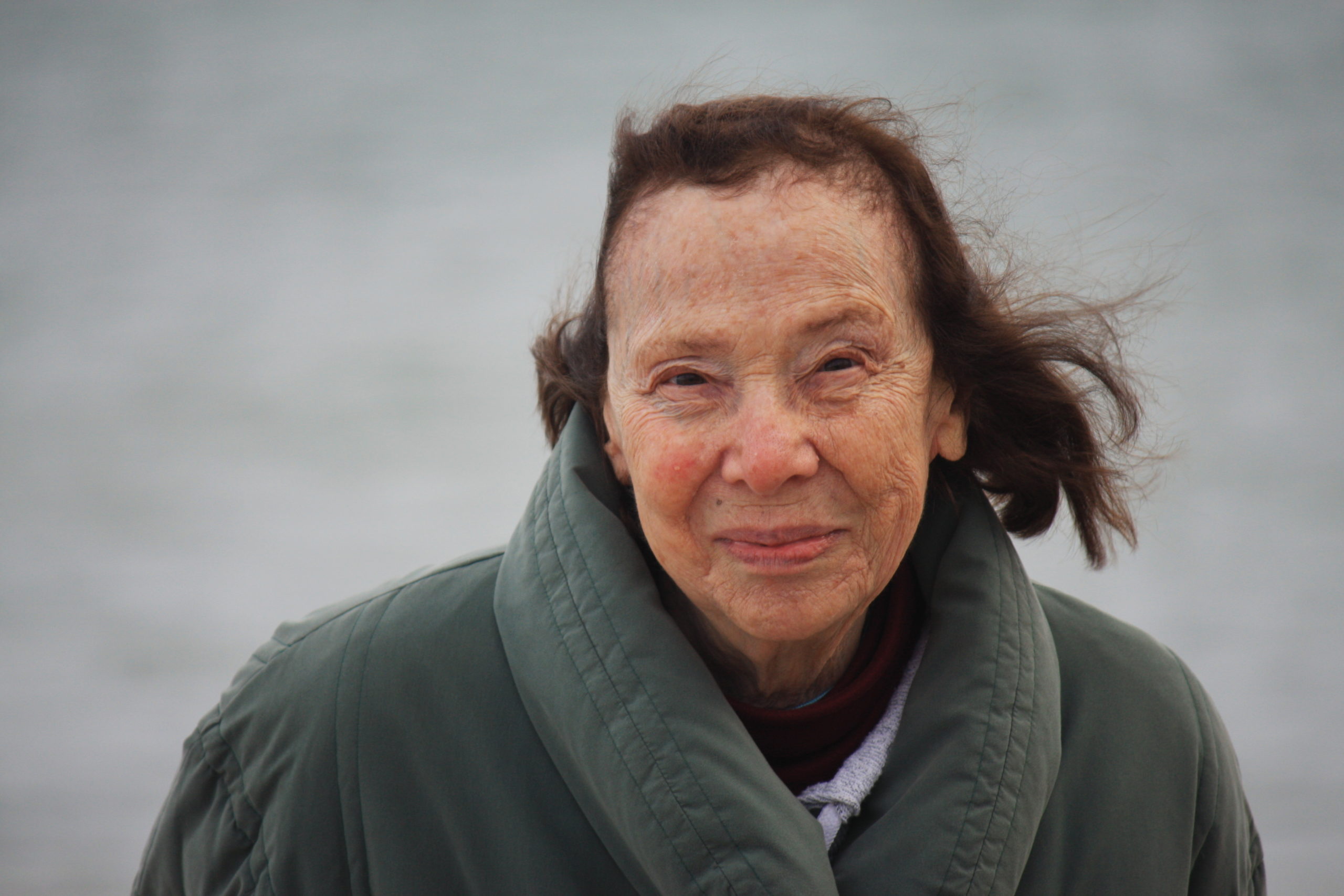 Poet Grace Schulman near her home in East Hampton. 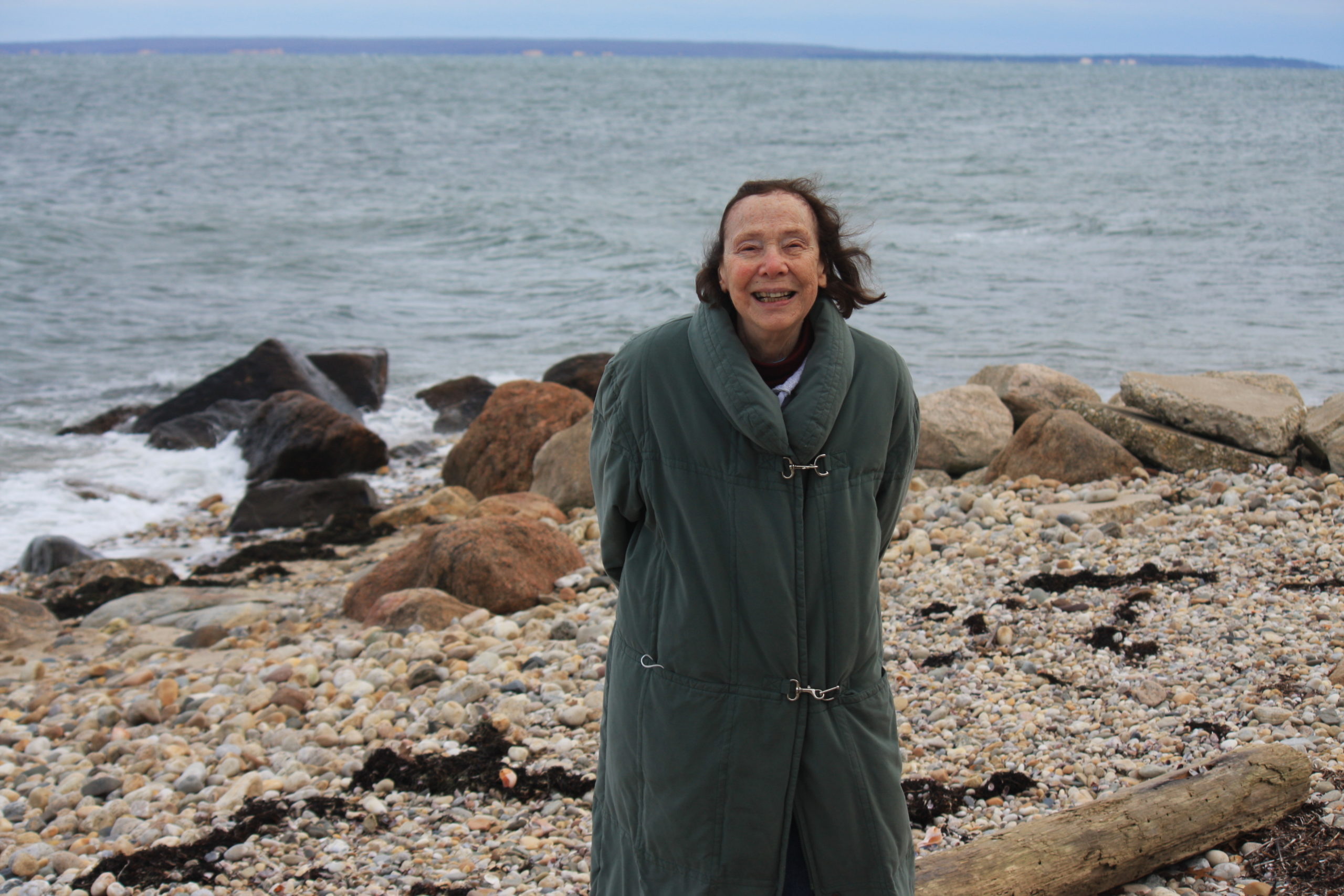 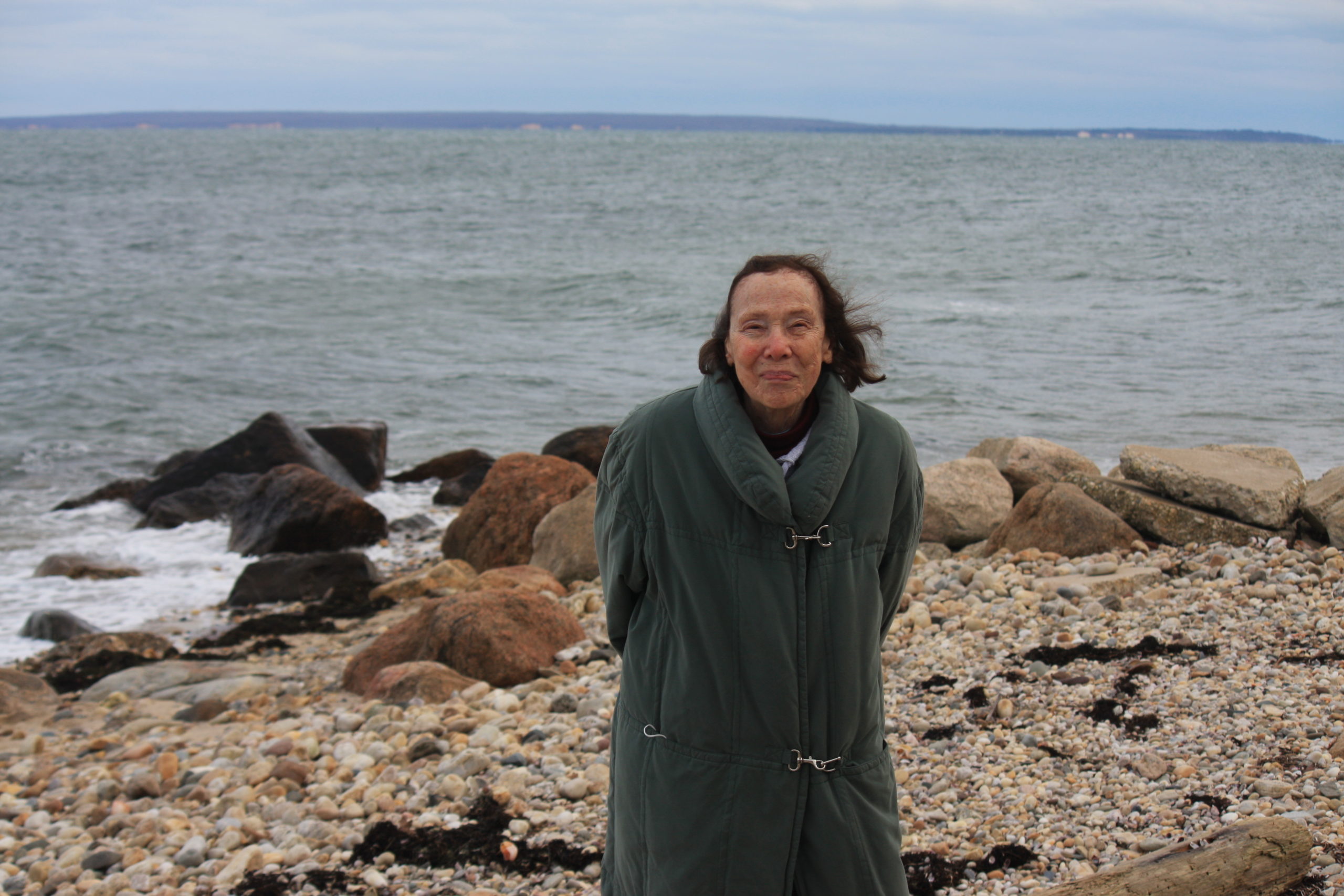 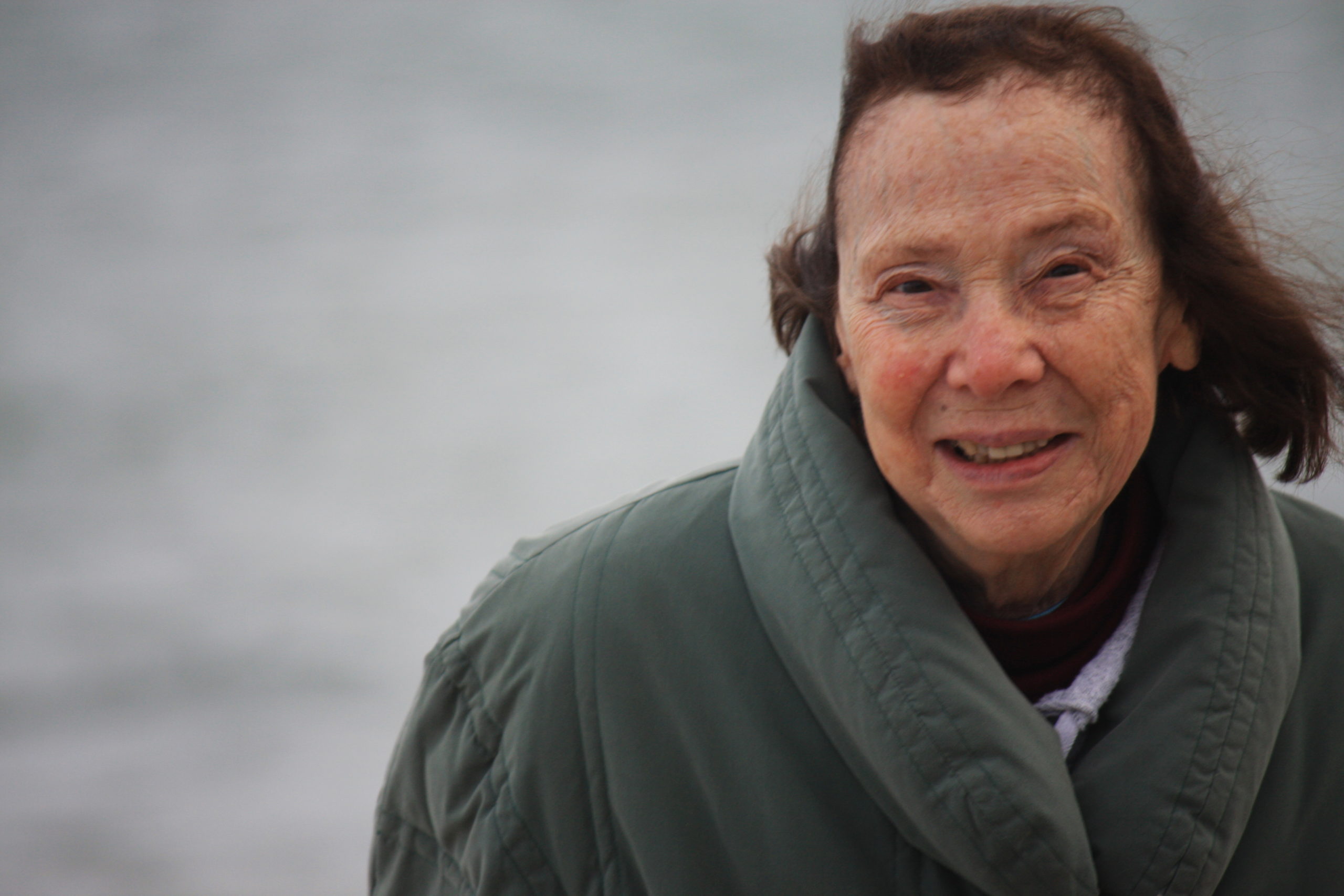 Music, art and history have always loomed heavy in her work, more recently intertwined with deep loss. The poet looks at the dark night of the soul, however the joy of everyday life overrides all.

“Death is a part of the life we live,” Schulman said. “My poetry tends to praise.”

She has been a great influence on my own life, as I tend to think of the negative. She is an inspiration to me, as well as her many students throughout the years as Distinguished Professor of English at CUNY’s Baruch College.

Schulman just finished her final teaching semester of the year. The lack of being able to physically see her students was frustrating at first. In perfect form, it turned into one of the best.

“I had a starry class, six of their poems, more than ever before, accepted in Encounters, the literary journal.

Still, she’s looking forward to taking a sabbatical next semester to work on her upcoming “New and Selected” poems.

Other than taking daily, 2-mile walks, Schulman, 85, hasn’t left her Springs cottage, for good reason. Yet she’s accomplished more than most. Definitely more than me.

I cannot keep up with my friend, who published her eighth collection of poetry, perhaps her best poems to date.

“I like to think I’m doing my best work — today’s work will be best yet,” she said.

“The Marble Bed” follows her 2018 memoir “Strange Paradise: Portrait of a Marriage,” both published by Turtle Point Press. Most of her books are dedicated to her husband of 54 years, Jerome L. Schulman, a brilliant virologist, who died at the age of 89 in 2016.

“Strange Paradise” reminisces and ponders regrets. “Mourning Songs: Poems of Sorrow and Beauty,” published by New Directions in 2019, celebrates the act of mourning.

The anthology would make a lovely gift for anyone struggling with grief, and really, who isn’t these days? Favorite poets like Elizabeth Bishop, Gerard Manley Hopkins, W. S. Merwin, Marianne Moore, and Dylan Thomas are included in the pocket-sized collection.

Whereas those two previous books delve into the nitty-gritty of grief, “The Marble Bed,” is transformative. The poet has taken her grief and alchemized it into something beyond loss.

“I moved beyond that,” she said.

The poem “Alive and Well: Tomb Sculptures in the Staglieno Cemetery,” the centerpiece of the book, is written in six parts, each representing a sensuous statue. She stumbled upon the cemetery in Genoa, while in Italy as a Bogliasco Fellowship Recipient in 2018.

When I asked her what attracted her to the marble angels, she told me, “Kelly, my dear the answer is in the poems.”

Pressing further, she continued. “I didn’t plan it. The poems told me what I felt. They usually do,” she said. “I was thrilled because they brought me back to life.”

Schulman embraced the stone, as her husband had embraced her, whispering in her ear, “It’s okay, love.” The muse can do that, no matter what the medium.

She found it fascinating that the two cultures were so different in that Italians genuflected in front of bare-shouldered women in the throes of ecstasy.

“We’re not used to that in this country,” she said.

“I identified with the widow,” she said of part two of the poem, “who pulled back the sheet like I did.”

“I know her by my husband’s silver watch/ that hasn’t stopped. The still warm belly./ The pearl pajama button on the terrace.”

It’s images like “the pearl pajama button on the terrace,” that begin the poems for Schulman.

“I find an image that pulsates to me. It’s electric and I don’t know why,” she said. “It all starts with an image in my mind or in my reality.”

She considers this process as part of “composition in place” where medieval monks would see an image and that image would call in the soul and the heart. “I can’t rest until I get the image out,” she said. “It becomes urgent. The poem comes from it.”

“The Shirt,” another image gleaned from her husband, is one of my favorites, probably because I’ve seen her wear it many times. It begins, “Your blue shirt calls me from a closet shelf/ above boxes of herringbone caps, sandals,/ and a leggy tripod, telescope missing.

It ends, “And now I tunnel/ through the craterly collar of shirt,/ dazzling immortalizer that knows our bodies,/ and frays only after we are gone.”

Although she still misses her husband, her trip to Italy and the poems that followed allowed her to transmute the darkness and move closer to the light.

“I’d written two books on grief,” she said. “I’ve moved to a place that has absorbed death. Death is a part of me, in other words, and the cemetery confirmed that life.”

And what a life she has led. She began her career as a newspaper reporter and received a Ph.D. against the advice of her mentor, the poet Marianne Moore.

She is an esteemed member of the American Academy of Arts and Letters in the Department of Literature, and has won the Poetry Society of America’s highest honor, the Frost Medal for Distinguished Lifetime Achievement in American Poetry as well as a Guggenheim Fellowship for Poetry.

She has served as director of the Poetry Center at the 92nd Street Y, the poetry editor of the Nation and has taught poetry at City University for almost 50 years.

Schulman and Jerry purchased the Springs cottage in 1977 for $29,000. Her love of the area is evident in previous books “Without a Claim,” and “The Broken String” published by Mariner Books, Houghton Mifflin Harcourt and still sings in “The Marble Bed.”

Since the pandemic, Schulman has retreated from her apartment in Greenwich Village to her summer home.

“Being in East Hampton is safe, protective and quiet, “ she said. “It helps the process. I’m working for survival.”

Boulders, seen on her walks to Fireplace Bay and in her own yard, inspired “Erratic” meaning “to wander” from the original Latin.

“You are the true explorer, the one who quit/ bedrock attachments to roll along/ new roads that would reveal the granite self, now my companion traveler in place.”

It is characteristic of her work to witness the terrible things that go on in the world and praise it nonetheless.

The poem “Because” illustrates this better than any. It opens, “Because, in a wounded universe, the tufts/ of grass still glisten, the first daffodil shoots up through ice-melt, and a red-tailed hawk/ perches on a cathedral spire; and because/ children toss a fire-red ball in the yard/ where a schoolhouse facade was scarred by vandals.”

The poem ends, “because I cannot lose the injured world/ without losing the world, I’ll have to praise it.”

It doesn’t get much better than that.

You can find “The Marble Bed” and others by Grace Schulman at Canio’s Books, 290 Main Street, Sag Harbor. You can also view her latest Zoom reading through Canio’s website: canios.wordpress.com.