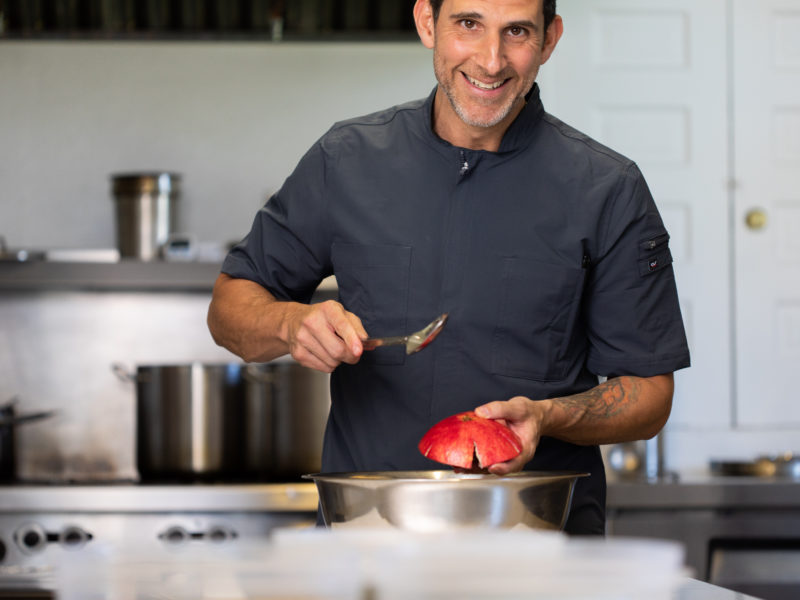 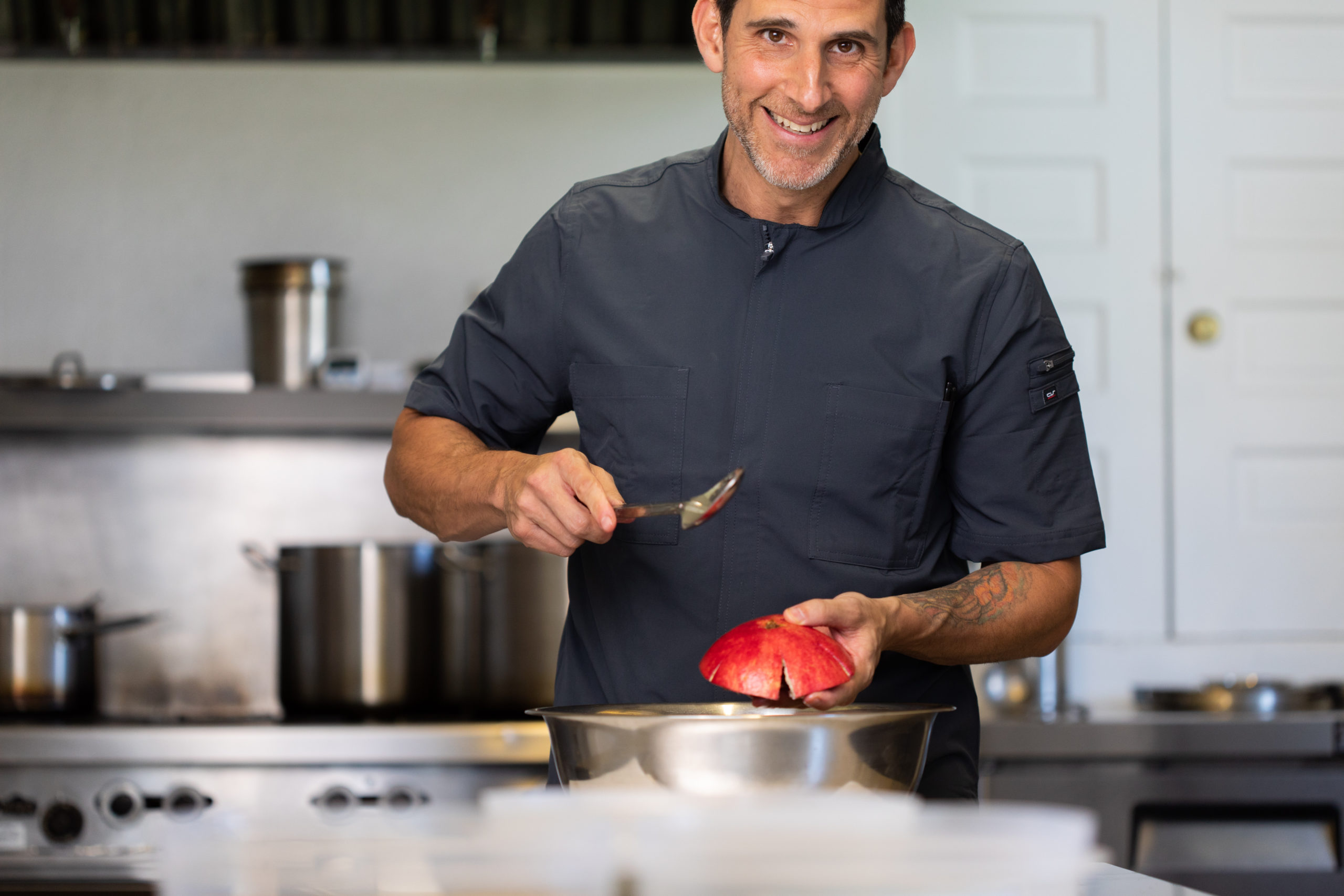 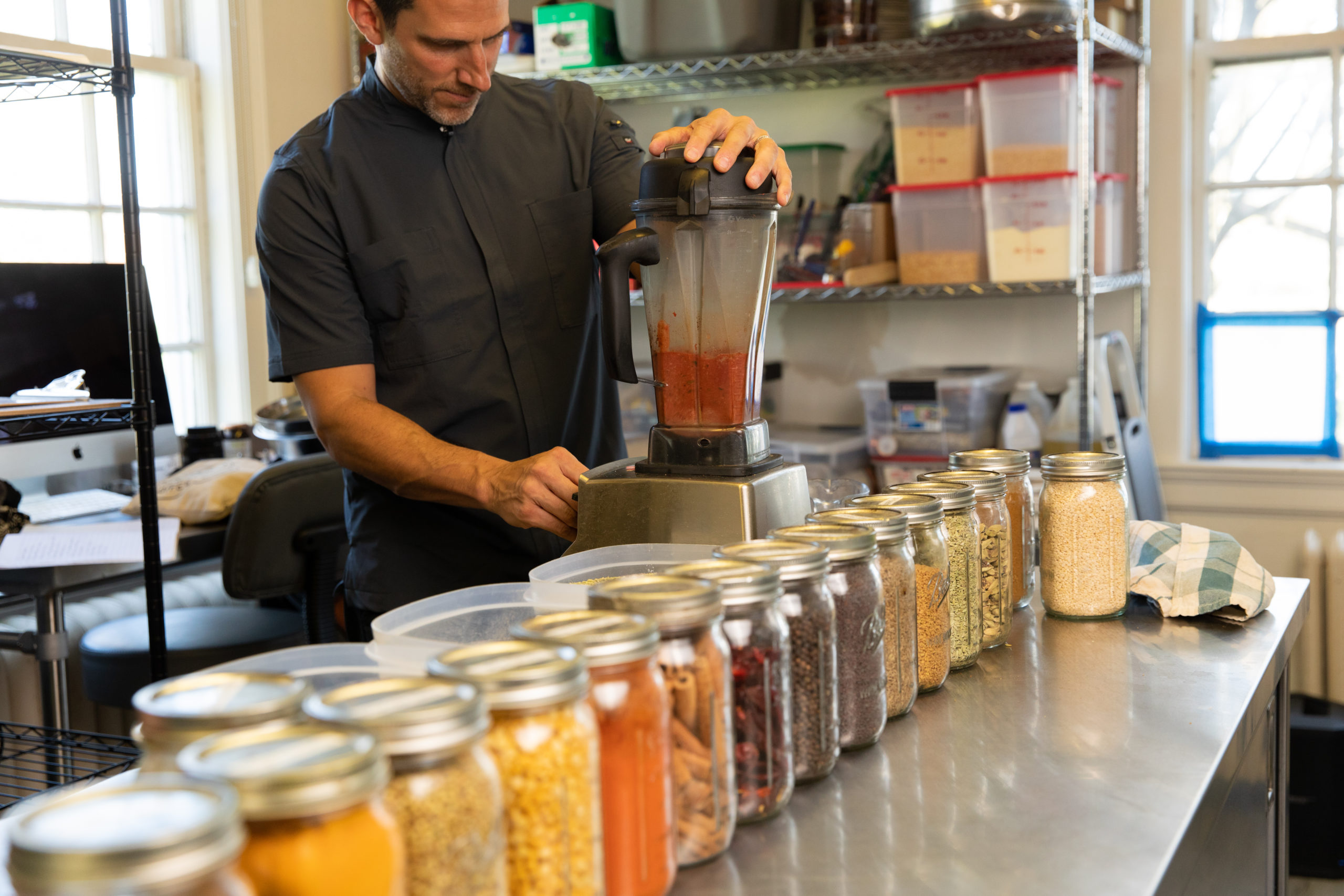 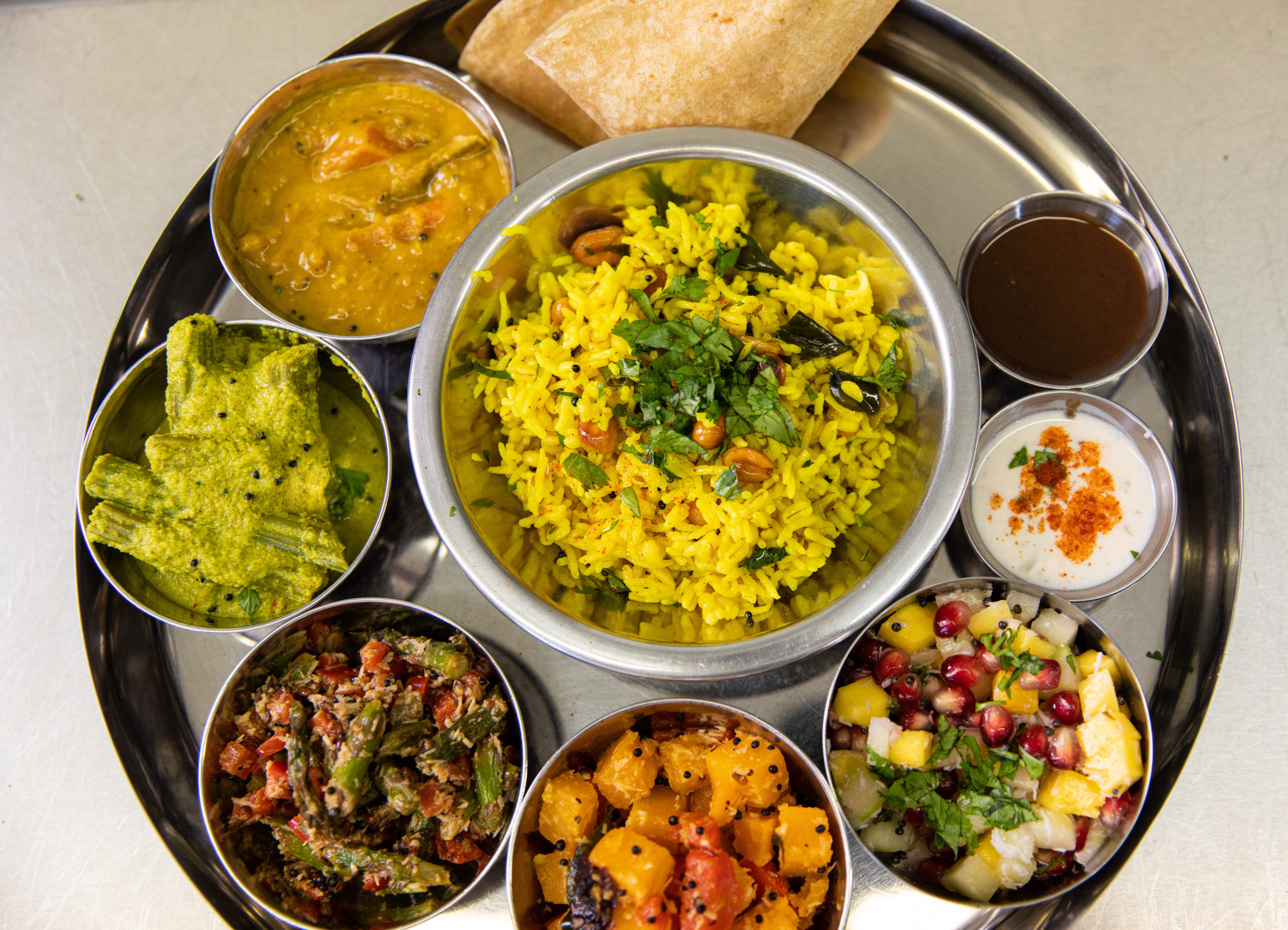 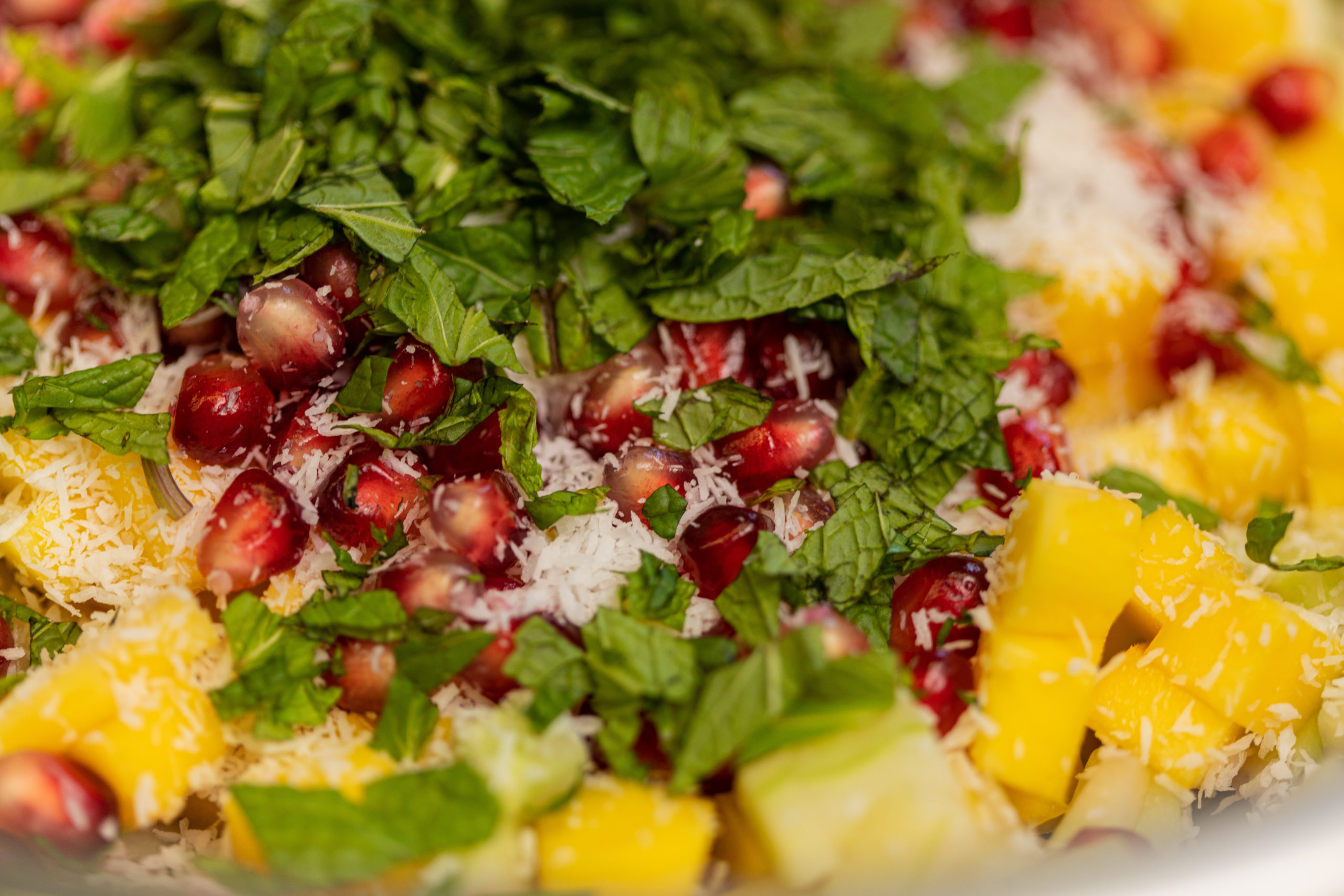 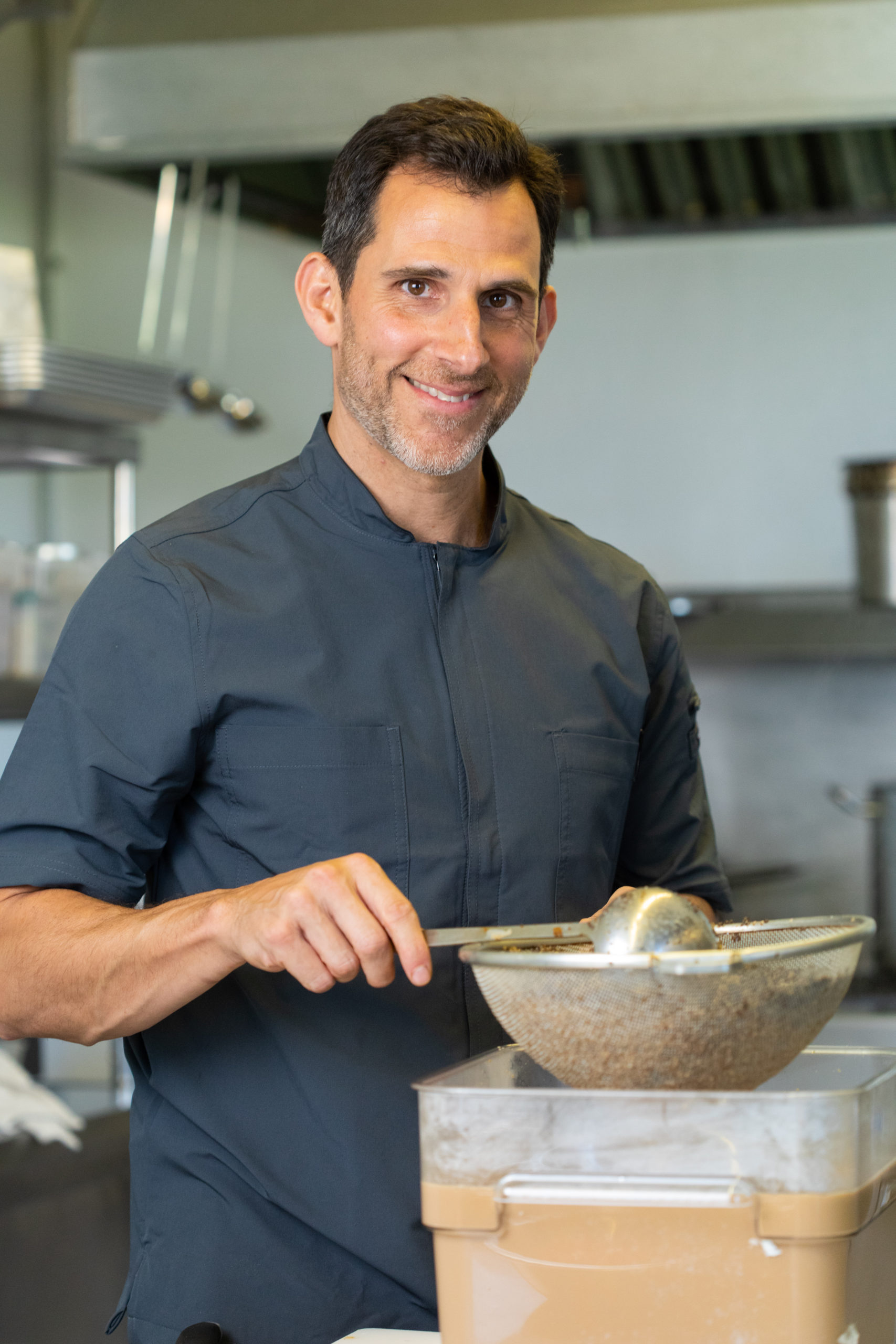 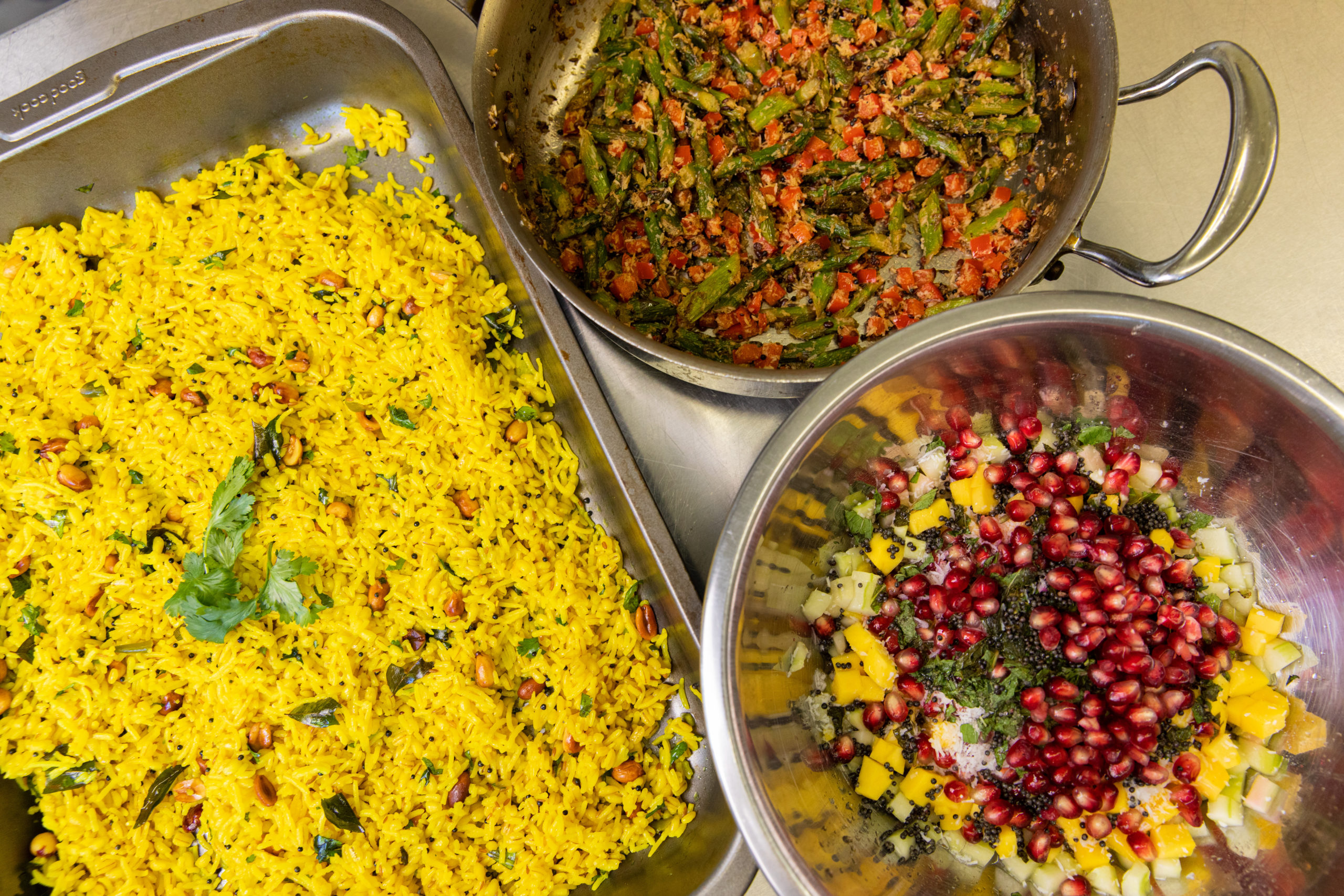 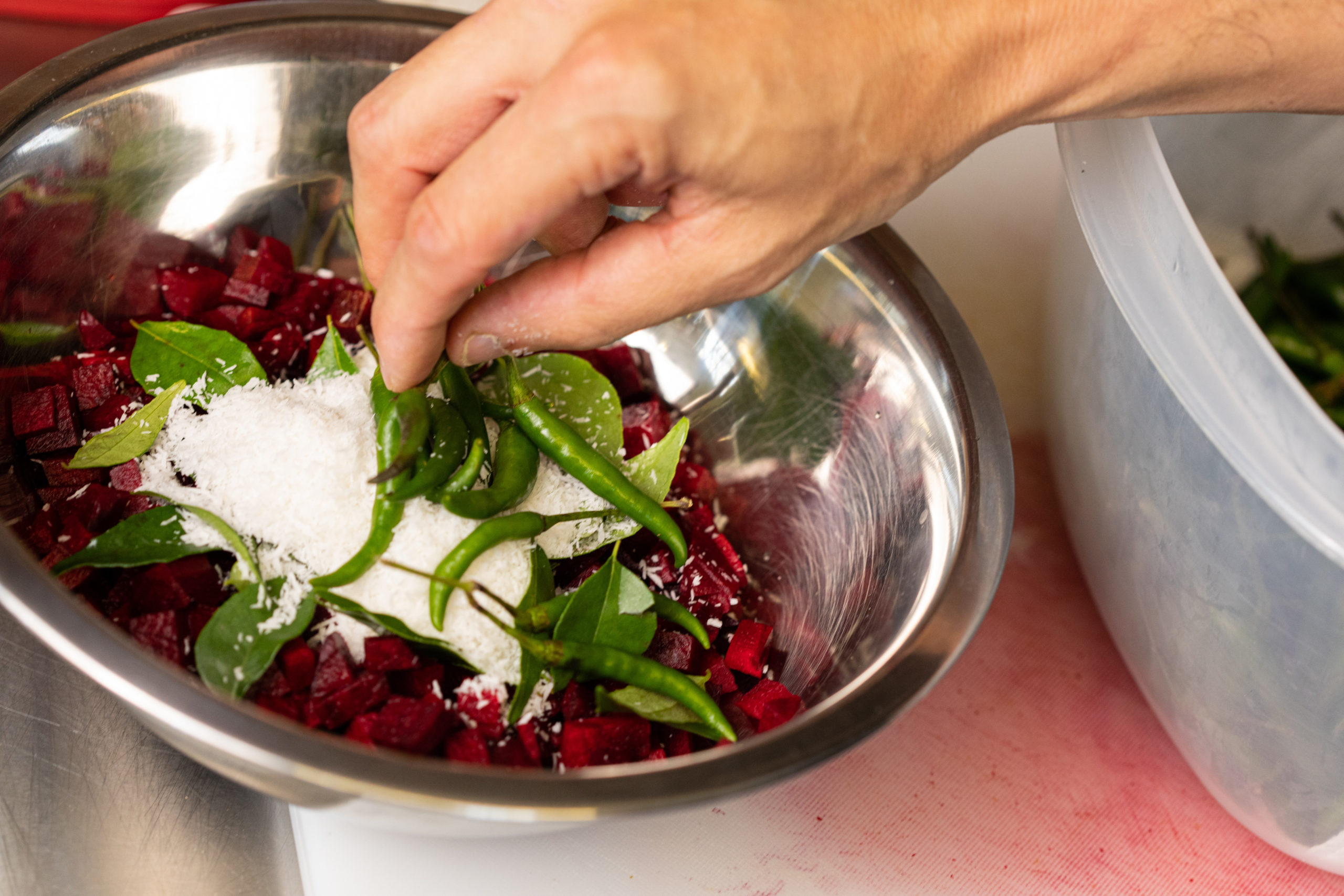 Tapovana has many meanings. It’s a location in India, a religion, part of an historical epic. Most of all, it’s a practice. It translates into “meditation garden” from two Sanskrit phrases that mean “disciplined effort” and “ancient forest.”

If anything, Corey De Rosa, the owner and founder of Tapovana Healing Center of the Hamptons and Tapovana Lunch Box is disciplined in his effort to make South Indian cuisine, part of a healthy Aryurvdic lifestyle, available to the public.

In Ramayana, an ancient Indian tale describing yoga as a lifestyle, Tapovana represents light conquering dark. “It’s where Hanuman is introduced,” he said, turning over his forearm to show a tattoo of the Hindu god Hanuman, part man, part monkey.

De Rosa grew up in a big Italian family in Hempstead, Long Island. The second oldest of six, he learned how to work and take care, at a tender age. As young as 5, he remembers questioning what life would be like in 70 years.

“Is life over? Do things go black?” his 5-year-old self contemplated, looking out the school bus window.

“I didn’t like that idea,” he said, now sitting in his kitchen, in the Bridgehampton Community House on Montauk Highway. “There’s way too much out there in the night sky for that to happen.”

The Catholic Church and Uniondale High School, where he was a star soccer player, provided for a wholesome experience, yet he yearned for more.

“You go to college and all there is is college,” he said.

In his mid-20s, a snowboarding accident in Vermont left the athlete with a broken back. “I thought my life was over,” he said.

Back surgery was recommended to fuse his spine, but doctors could not give him the guarantees he needed to feel comfortable going under the knife. Instead of a massive operation, he opted for yoga. Physical therapy and acupuncture helped ease the pain to some degree.

“It helped, but as soon as I stopped, the pain came back,” he said. “Yoga spoke to me because it went way beyond the physical, to the mind-body.”

Yoga practice led to the study of yoga philosophy. “That is when I changed my life completely,” he said.

At 28, the spiritual little kid was getting back to his spiritual roots. “I always had the idea I’d get back to a perfect way of living with spirituality and health,” he said. “But I kept putting it off.”

He had a career as a restaurant server in New York City and began working summers in the Hamptons, at 75 Main Street in Southampton in 1995 and then Sen in Sag Harbor until 2008. He took classes at Stony Brook University including drawing, painting and pre-med.

More importantly, he took Ashtanga yoga classes with Eddie Stern, who he calls “a fantastic teacher,” who is often seen in the press with celebrities like Madonna, Gwyneth Paltrow and Donna Karan.

“I didn’t feel better physically for a very long time, but I felt better emotionally and spiritually, like when I was a kid,” he said. “I got something deeper back.”

In 2006, he opened Tapovana Yoga Studio in Sag Harbor, his first incarnation of sharing information. In 2007, he began to study with Ayurveda practitioners Dr. Robert Svoboda and Dr. Scott Blossom, and began offering seasonal Ayurvedic weeks of living.

He traveled to India for the first time in 2008 and has returned every year since, except of course last year.

“In India, everyone had a smile. It’s coming from the inside,” he said. “In their culture, importance is placed on inner health and spiritual awakening and so little importance on material wealth. Almost exactly the opposite, as here,” he said.

When in Mysore, India, he practices yoga, meditates and studies philosophy with Dr. M.A. Jayashree who also taught him to cook in the Ayurvedic tradition.

Ayurvedic meals go beyond health food because the philosophy deals with much more than the physical body. “Unique spice combinations and food pairings nourish body and mind and also aid in the digestive process,” said De Rosa. “Mustard seeds, black pepper, cilantro, lime, are all ingredients which detoxify by removing impurities from the body, releasing old emotions.”

“Can food really do all that?” I asked.

For my ignorance, I get a well-deserved sideway glance. It is true that modern science is catching up to what the yogis knew thousands upon thousands of years ago. If our digestive system is strong, our immune system is strong and we are strong.

“Enhancing the power of digestion is tending the sacred fires,” he said, invoking Agni, Lord of Transformation. “If the emotional cleansing fire is tended properly and burns evenly, we are bright beings of perfect health filled with wisdom and compassion and gifted with long lives through strengthening of the immune system.

“Much like our yoga practice, food is designed to make us stronger and more clear, so energy such as blood, oxygen, nutrients and cosmic intelligence can flow through us more freely,” he said.

The most amazing thing about Tapovana Healing Center, the non-profit arm of the business model, is that De Rosa provides 300 meals a month to local food pantries, in partnership with the Lion’s Club. Those meals are the same that are served at Tapovana Lunch Box.

You don’t find many other businesses that truly give back to the community like Tapovana.

“The need is there,” he said. “We plan to go way beyond that and take donations from the generous people who live here.”

Since Tapovana headquarters moved to the Bridgehampton Community House last fall (it was previously located at the Unitarian Universalist Meetinghouse in Bridgehampton), in the midst of the pandemic, De Rosa stopped teaching yoga classes publicly, but does so privately.

“My wife Erika took on a giant workload of moving all of our classes online,” he said. “Now the opportunity is to focus on food.”

“Our goal here is to give people that experience without going to India,” he said. “Everyone’s soul evolves at a different pace. It’s too good not to share. Always.”

Aside from food that tastes good, and a glimpse of a healthy Ayurveda lifestyle, De Rosa’s big Italian family set the intention that love always surrounded food. “That’s what we try to put into food,” he said.

De Rosa posts his daily menu on Tapovana’s website, and emails menus to people who sign up for the newsletter at tapovana.com. Pre-order to pick up at the Bridgehampton Community House during the week or have lunch delivered to your home.

In addition, Tapovana offers seasonal re-sets and detoxes where lunch and dinner are prepared for the week, along with suggestions for various self-care practices. If you can’t get enough of the zesty vegetarian food, De Rosa offers private online South Indian Ayurvedic cooking classes.

Tapovana has grown with each incarnation and like its namesake, the purpose is to serve.

“I stayed the course and fear and doubt slowly burned away,” he said.

Yes, food can do all that.