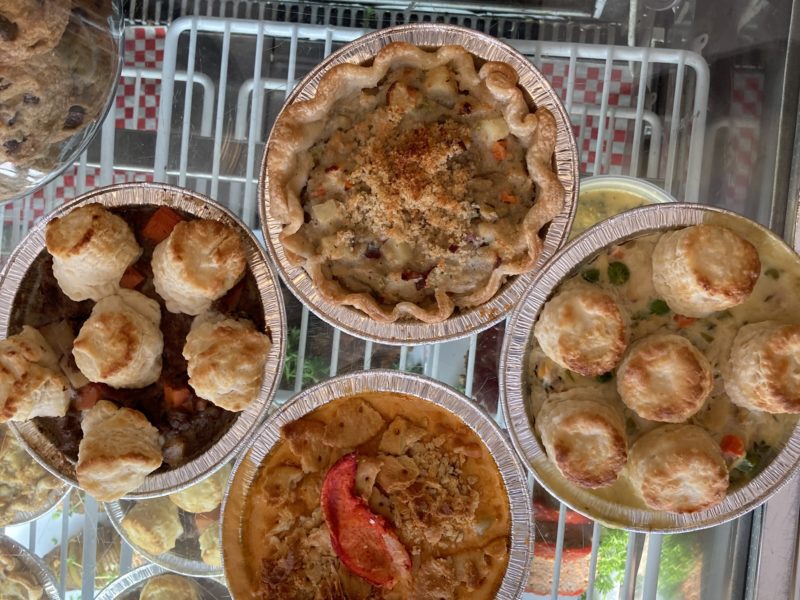 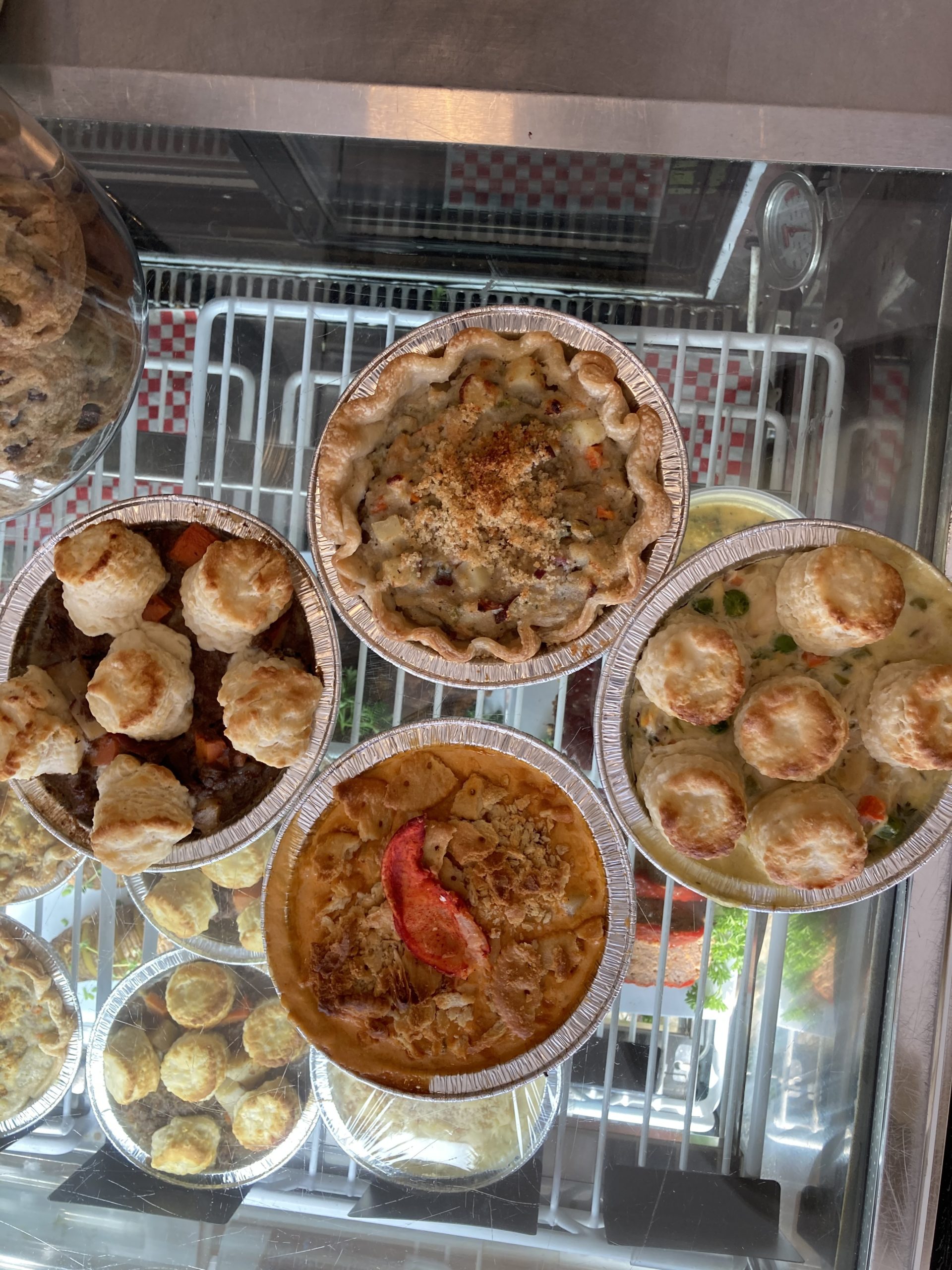 A selection of Bostwick's Market offerings. 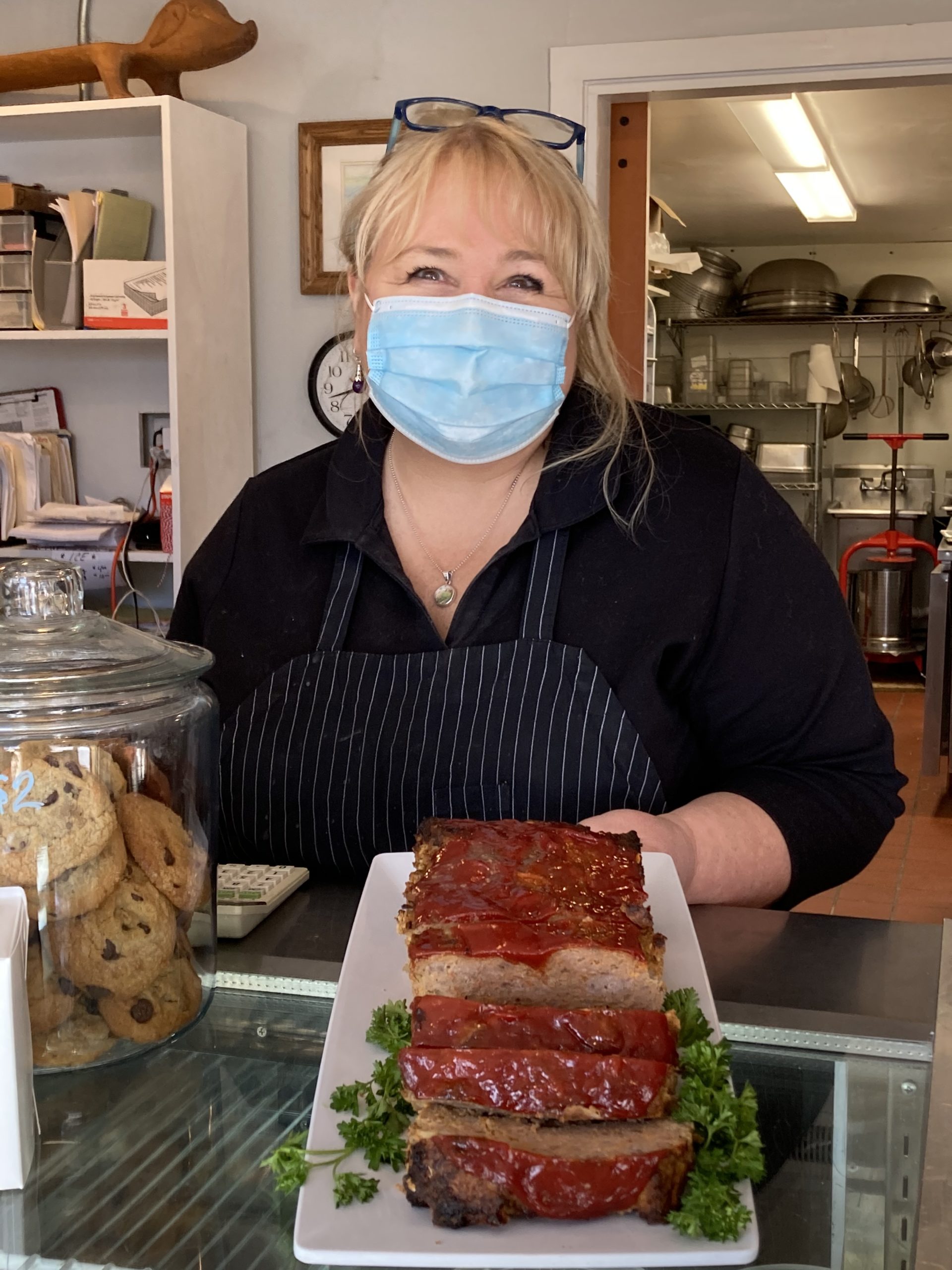 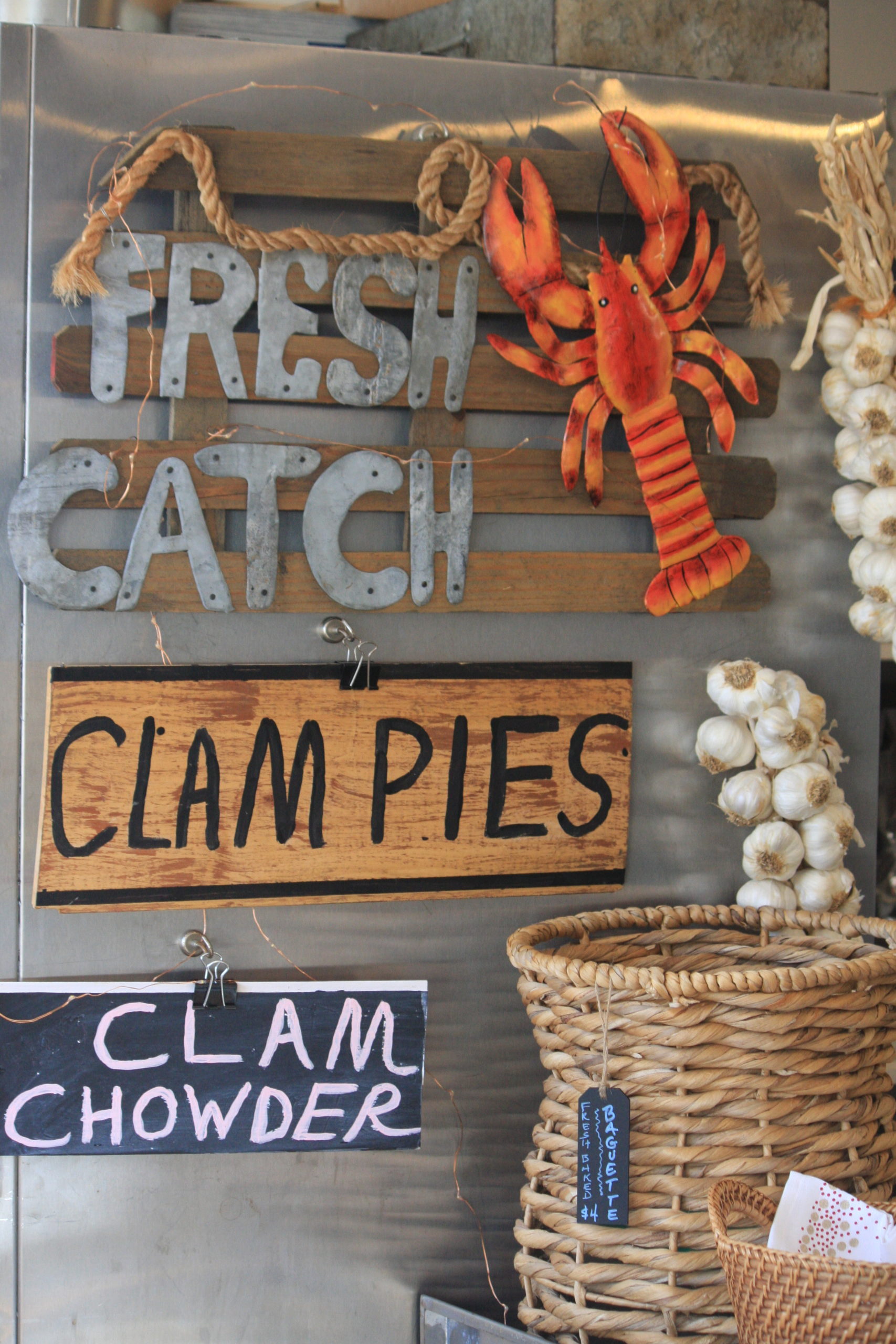 Signs advertise some of the offerings at Bostwick's Market. KELLY ANN SMITH 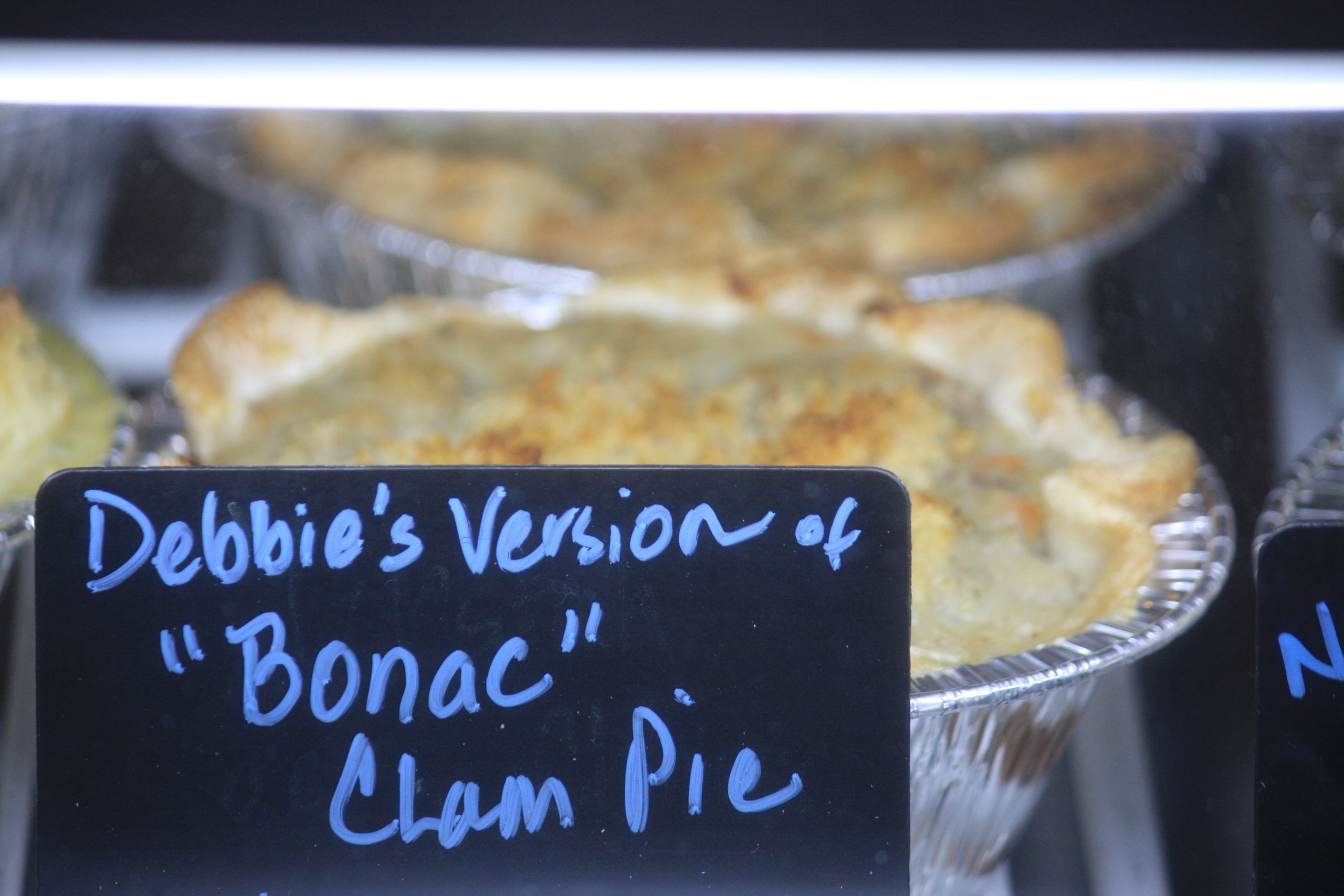 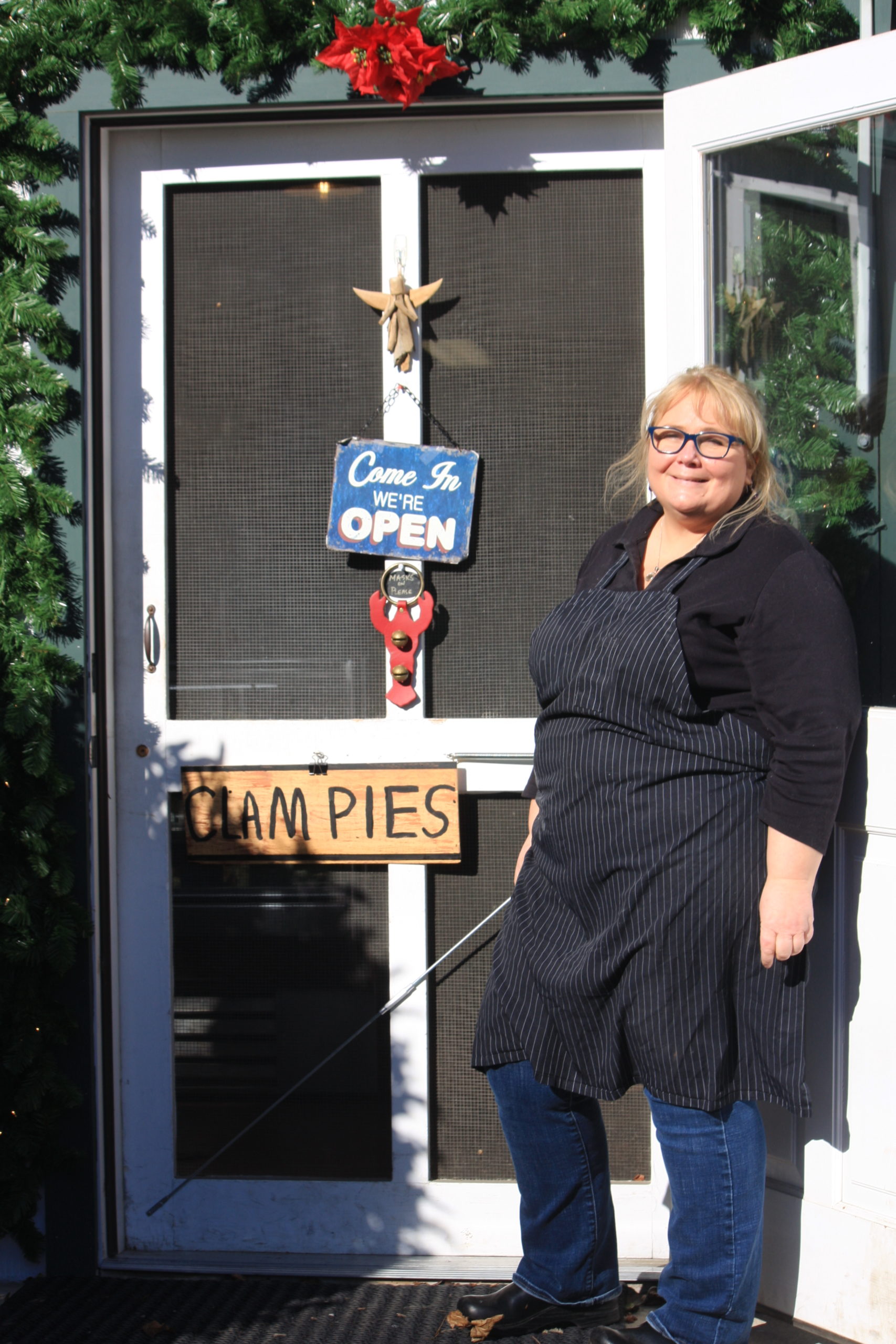 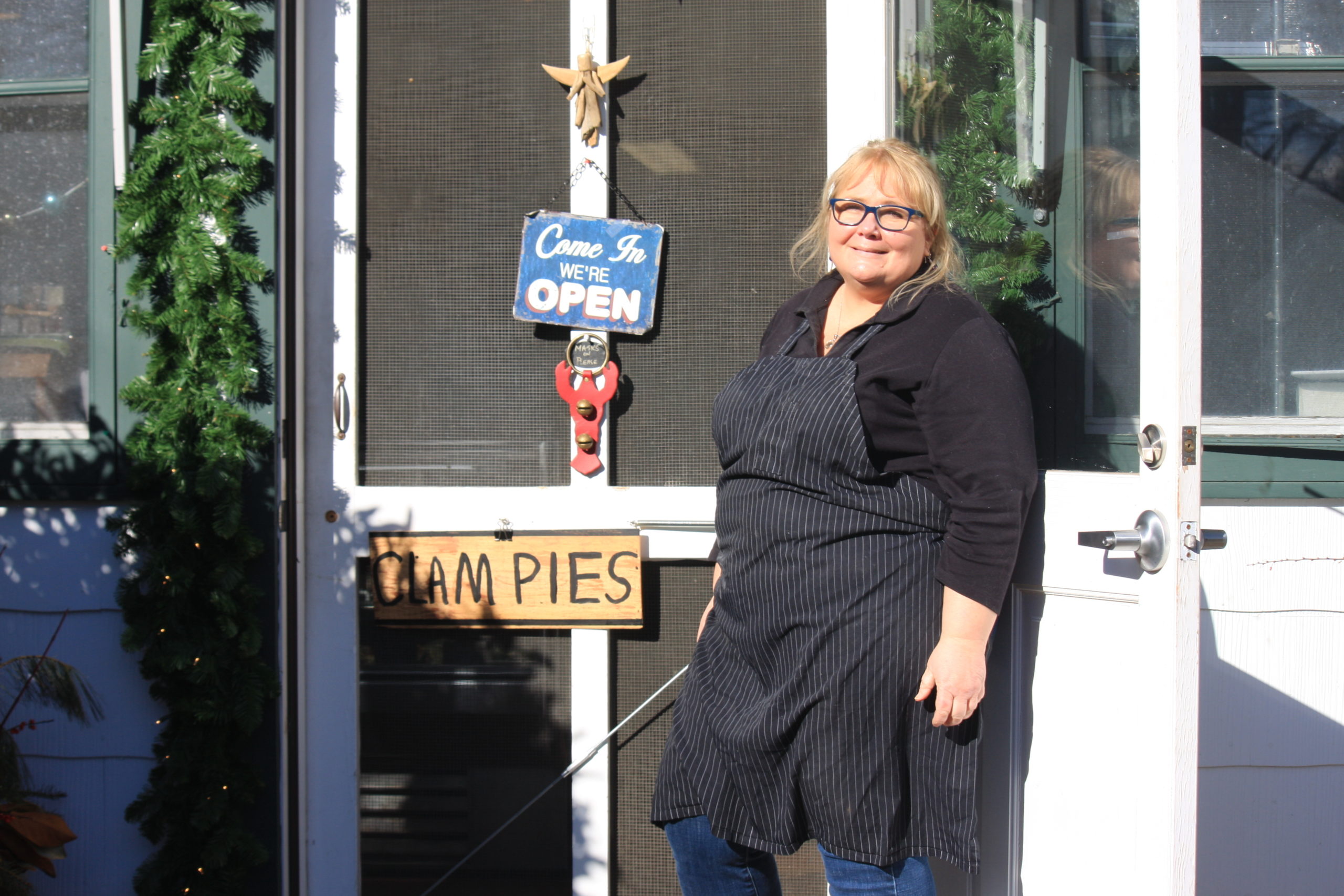 One night recently, I was caught without a plan for dinner. A big no-no in the time of COVID-19. Gathering food or a prepared meal must be thought out in advance. I wanted a home-cooked meal and didn’t want to cook it. Something comforting and affordable but not junk food.

As darkness and hunger set in, I drove from the bank and took a turn onto Pantigo Road, racking my brain for a place to go, like something would magically pop into existence. It did.

The little market with forest green trim, which used to house Food and Co. and my favorite of all time, Pascal’s (still dreaming of his spaghetti pie) next to Bostwick’s Chowder House, was open. A sign hung on the screen door beckoning people inside and I took the call.

Debbie Geppert met me at the tiny counter with all kinds of pot pies, perfectly cooked single portions of salmon, fresh cooked veggies, empanadas and peanut butter pies. Suddenly I had too much choice, and a new friend.

Geppert, the director of catering at Bostwick’s, grew up in Wainscott. “I’m a local girl,” she told me later on the phone. “I’m from a big Italian family on my mother’s side.”

“You lose your arrow for a bit,” she said. Still, her father’s illness did give her direction. “It was my initial reasoning for going into nutrition.”

She went upstate to study nutrition, and then the culinary arts, working in the food service the entire way, from delis to resorts in the Catskills and later corporate hotels in Connecticut.

She moved back to East Hampton 25 years ago, with a new husband in tow, who also worked in the food industry, in order to help her grandmother. “I live in her house now,” she said.

The couple worked for Plain and Fancy, another sorely missed gourmet shop on Springs Fireplace Road, and also started catering small parties on their own.

“Back then, there were no stringent rules and you could work out of your kitchen. I also had three young children,” she said. “When I got divorced, I decided to do my own business correctly, and that became my life.”

She partnered with Dreesen’s, another sorely missed mom and pop food shop that became solely a catering business in East Hampton Village. Like all good things, eventually the partnership ran its course. That’s when she joined with Bostwick’s, but not for the first time.

She learned quickly that Bostwick’s high-volume clambake is a well-oiled machine that included a lot of working parts, with a minimum of 25 people per party, kicking things up a notch. “Clambakes were not my forte,” she said. “I know a lot about catering.”

Geppert brought her brand of expertise in cocktail and dinner parties into the mix and grew the catering division.

“Pre-lockdown we were looking at one of our best seasons,” she said. “With so much on the books, we knew it was going to be an awesome season.”

Until it wasn’t. Instead of preparing for parties last spring, they were issuing refunds to people who had booked weddings and other events in advance.

“COVID has had a major impact on our community,” she said. “We obviously can’t gather in large groups. The governor’s mandate changed monthly and by the end of last summer it was a total of 50 people including the catering staff.”

Business was affected by 90 percent when normally the phones would be ringing off the hook. “What are we to do? We couldn’t plan. Catering is planning a year or two out sometimes,” she said. “We were dead in the water.”

She admitted her first thought was pure selfishness. “How am I going to keep my job? I’ve become redundant, with nothing to do, no business or prospect of business.”

She knew she wanted the company to stay visible throughout the pandemic so that when people were allowed to throw parties again, customers would remember them.

“Don’t dwell on the negative,” she said. “Combat the flight response.”

That’s easy for her to say. “When you’re an off-premises caterer, you’re always going to run into some kind of issue, but there’s always a fix,” she said. “We’re used to fixing things in tense moments.”

Luckily catering is a secondary business for Bostwick’s. Sole caterers were not so lucky. “These are the people I really feel for,” she said.

Bostwick’s owners purchased the market, formerly Food and Company, next door to the Chowder House specifically for the extra kitchen space and not necessarily for a retail market, but Geppert felt there was a need to make home-cooked, affordable dinners.

“That was our pivot.”

They opened in the spring, but by July they had to close the market because people were calling for small parties of under 20 people.

“It was hard to cater and do the market because we were so busy but down to three core catering crew,” she said. “We were too busy for what we had and not busy enough to bring on more staff. That’s the dilemma.”

People also wanted minimal crews but the same rate of service they were used to getting pre-COVID which made for a stressful summer to say the least.

By the time fall rolled around, last-minute micro-weddings exploded. Although parties were smaller, people still wanted all the bells and whistles. The weather played an even bigger part than usual.

“It was the first time in that year we felt a little normal,” she said. “Every weekend felt good in terms of workload. Then it started to get cold again and things got quiet.”

The market reopened in October and this time Geppert expects the market to stay open. “Originally the market was temporary but now I see the value and have come to love the customers,” she said.

Her goal now is to balance both the market and the catering. “I’m a generous spirit. I love feeding people. My approach is being welcoming and grateful and happy.”

She serves home-cooked, simple food that she likes to eat herself. “Wholesome, delicious meals are the guiding principle in how I cook, and you’ll see that in the market I created,” she said.

No garbage. Rustic Italian, old school, home cooking, like her mother’s meatloaf recipe. “Her secret is she adds grated carrot and potato, which helps keep it moist,” she said. “I won’t give the whole recipe, just that little tidbit.”

I will say that her macaroni and cheese, made with four real cheeses, goes perfectly with mom’s meatloaf.

Buttermilk biscuit toppings put a spin on the classic chicken pot pie, and she has her own version of a Bonac clam pie. Traditionally the crust is made with lard and the filling is basically clams, onion and potato. “I like jazz,” she said. “I add other ingredients like fresh herbs.”

Again, she’s tight-lipped other than to say, “thyme mainly,” and I smell a cookbook coming on.

She first started making miniature clam pies for a Slow Food Joshua Levine Memorial Foundation fundraiser, as a nod to localism. “I did it for years as an appetizer, and now I have a bigger version at the market.”

One of her best-sellers is her own invention: the lobster pot pie. Recently, she added a beef stew with buttermilk biscuit topping to the menu.

They have specials such as “Fajita Night,” a nod to the old Indian Wells Tavern, and serve empanadas made by her friend in Southampton.

Even though the market means working during the winter when she’s usually resting, she is looking ahead. “If you focus too much on COVID, boy, it’s lead boots,” she said. “I’d like the market to become a fixture and something born out of this.

“There is life after COVID and I want to be ready for that life. I miss that life.”