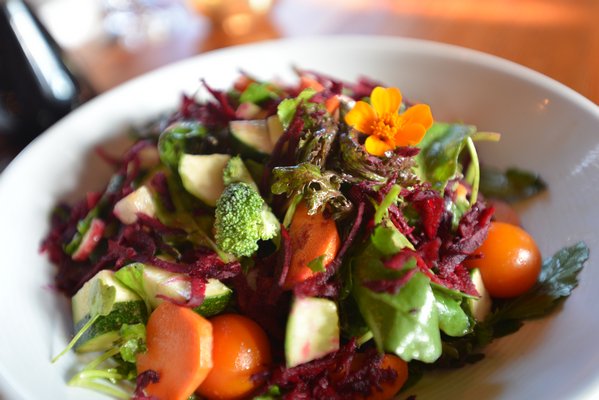 The Make Your Own Salad at Fresh Hamptons. ALEX GOETZFRIED 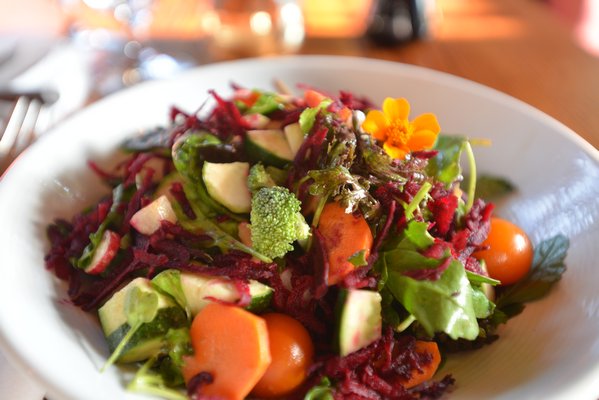 The Make Your Own Salad at Fresh Hamptons. ALEX GOETZFRIED

Todd Jacobs has seen the future and it is now.

The chef who pioneered the farm-to-table movement on the East End 20 years ago is pushing the envelope again in Bridgehampton by allowing diners to put their own dishes together using the freshest seasonal vegetables and proteins. It is health food by default, but more satisfying than any diet imaginable.

Signature Dish: Build Your Own Salad; $9

The idea for Fresh Hamptons is one that has been a long time in the making for chef/owner Todd Jacobs. He wanted a vegetable-oriented place with fresh local veggies that he could feel comfortable bringing his kids to visit. Since there were no real family-friendly options in the farm-to-table world, he decided to create one.

“I really labored long over how am I going to make this different than all of the other restaurants out there?” the chef said.

What he fell back on was his regular customers who have been dining at his restaurants for decades and their method of ordering. People would ask the chef “What is fresh today? What do you recommend?” he reported, adding that he would talk them through what he had and what farm it came from and put a meal together based on that.

Giving people the choice of what’s fresh and letting them put the dish together how they wanted, was where the menu design for Fresh Hamptons came from. It was all about letting people create their own meals.

The menu by nature is 95-percent gluten free, which has also made Mr. Jacobs very popular with people suffering from celiac disease, he reported.

“The thing that I really did differently, you have your vegetarian restaurants and your vegan restaurants, I wanted to bridge that gap, I wanted to bring the general public a place that is family-friendly, that you feel comfortable with your family,” Mr. Jacobs said. “A neighborhood kind of restaurant with enough choices, enough selection and to be adaptable enough where you can come here and eat every day.”

Meals can be created individually or served family-style. Diners can order protein by weight and have approximately 17 sides to choose from for pairing. A vegetarian can create an entrée by selecting five sides for $20, and a carnivorous counterpart could order a pound of short ribs if their heart desires.

“Just last night a women who is a regular came in here with her boyfriend. She’s been eating here three times a week, trying to get him to come and he told her ‘I don’t eat healthy food, I don’t want any part of it, I don’t want anything to do with it!’” Mr. Jacobs laughed “But then he said, ‘I came tonight and the food is really good’ he was like shocked!”

The customer’s favorite dish is the String Beans. The green veggies are sautéed with garlic, shallots and fennel tops. The green beans are delivered daily from Bette and Dale’s Farm, just down the road in Sag Harbor.

“I’m almost exceeding their production,” Mr. Jacobs said, as the farmers, Bette Lacina and Dale Haubrich, walked in for dinner.

Bette and Dale’s farm is chemical-free, fertilizer-free and sustainable. According to Mr. Haubrich, it has been 21 years since they first delivered to Mr. Jacobs when he was the chef at The American Hotel in Sag Harbor. Ms. Lacina said the chef served a farm-to-table menu even back then, before it was cool.

“Todd was a pioneer, he was the first chef out here to really take on local organic,” Ms. Lacina said. She went on to point out that Mr. Jacobs received a Green Skillet award from the Northeast Organic Farm Association. “He deserves it because he always supported local organic before anyone else.”

The local farming couple was adamant about the fact that Mr. Jacobs genuinely buys everything local and seasonal. He’s the real thing, they assured.

“Todd was the first one to use wild greens, like amaranth, lambs quarters and purslane. Now it’s trendy,” Ms. Lacina said. “He was way ahead of the trend.”

Now Mr. Jacobs is at the forefront of a new trend, allowing diners to design their own meals based around the freshest ingredients available.

That sentiment is apparent in the restaurant’s signature dish, the Build Your Own Salad. The diner is allowed their choice of greens, five toppings, add-ons such as cheese and nuts, as well as a protein, by size, if desired. The five sides vegetarian plate, which is $20, could also be considered a signature dish, according to Mr. Jacobs, as customization and low prices are what Fresh Hamptons is all about.

“I kept the price down because I wanted people to be able to come back every day. I wanted a busy place,” Mr. Jacobs said.

The chef’s favorite meal is a double-decker salad that he eats almost every night. Mr. Jacobs takes a Kale Salad, puts a Greek Salad on top and then adds a 4-ounce piece of fish. He tries to eat all of his calories in plant form during the day and the fish is his protein treat at dinner.

The vegetable calories are nutritionally dense, according to Mr. Haubrich, because of the deep-rooted nature of the wild greens and the care he takes to keep the soil rich.

As the farmers got ready to sit down and eat, the conversation turned to dry tomatoes, and the fall and winter crop that would be coming out and changing Mr. Jacobs’s menu slightly at Fresh in the coming months.