Dining Out In Sag Harbor - 27 East 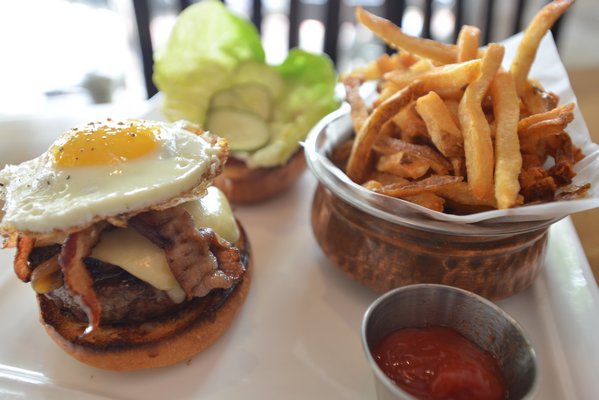 The Cuddy Burger at The Cuddy. ALEX GOETZFRIED 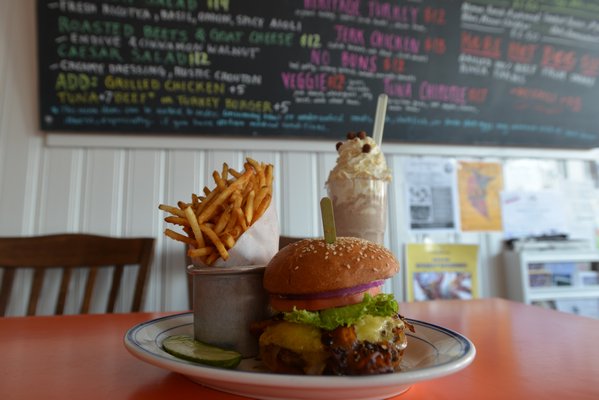 The Smashed Smoke and the American Puff at LT Burger. ALEX GOETZFRIED 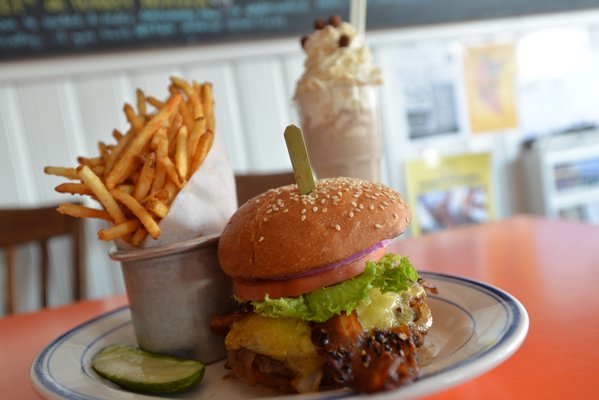 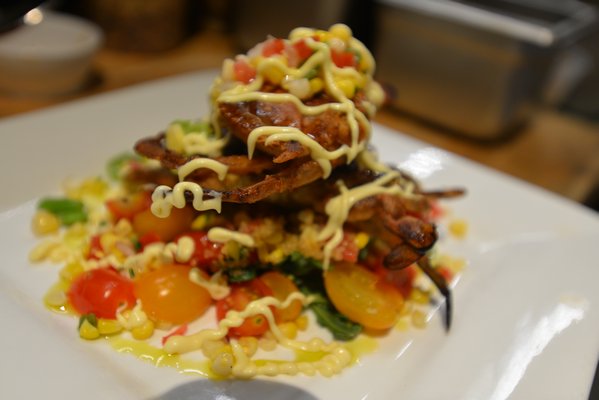 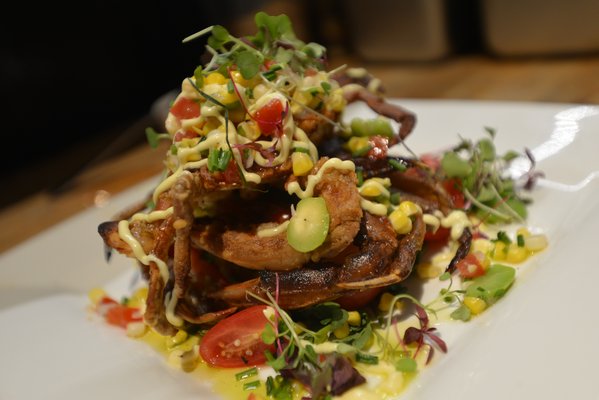 It doesn’t get much better than a summertime stroll down Main Street in Sag Harbor, especially when the afternoon is spent noshing at any of the dozen or so restaurants on the strip.

Madison & Main, a collaboration between chef Eric Miller and restaurateur Michael Gluckman, is in its inaugural season. Both partners have Manhattan and Hamptons restaurant experience and it shows in the decor and cooking technique, which features fresh local ingredients the East End bountifully provides.

Mr. Gluckman was the manager of Tribeca Grill and Nobu in the city, and has been an East End restaurateur for years, best known for The Lodge and Bamboo both in East Hampton. Mr. Miller has had multiple two-star restaurants in Manhattan. East End ventures include East Hampton-based Food & Co. and Hampton Clambake.

The owners describe Madison & Main as a modern seafood tavern. Its purpose is to support the Peconic Bay basin by buying local, seasonal fish and shellfish, they said.

The Montauk Tuna, cherry red loins of local-caught tuna bought from the docks in Montauk, is the biggest seller, they reported.

“I won’t accept anything else,” Mr. Miller said of the local catch with perfect coloring and fat.

The eye of the loin is scooped, cut into a block, rolled in Sicilian bread crumbs and served over summer vegetable ragout. It’s garnished with aged balsamic, toasted pine nuts and tomato confit made of sweet slow-roasted tomatoes.

The signature dish is the Soft Shell Crabs, which aren’t on the menu but run as a special every night they are available and in season. For that dish, two jumbo crabs are pan-seared and laid atop a fava bean, corn, tomato and jalapeño salsa. The dish is finished off with a saffron aioli, basil oil and a squeeze of fresh lemon before it makes it through the pass.

Mr. Miller’s favorite dish is the Roasted Black Sea Bass, which, as of July 1 when the season ended, became striped bass with the same preparation.

The fish are netted and brought in alive and nothing goes to waste. After filleting the fish, the racks are used to make soup de poisson, which serves as the broth for the dish.

Making the dish is a two-pan process, put together in a deep porcelain bowl, the chef reported. The bass is served crispy skin side up, over local summer vegetables and clams. The soup de poisson is strained, and made into a bouillabaisse with white wine, garlic and shallots, and the bowl is filled a quarter of the way with the broth.

LT Burger has been open since August 2010 and is helmed by chef Andrew Buffalino and owned by chef Laurent Tourondel. The two met through a mutual friend and realized they shared the same ideas about food. Mr. Laurent was looking for a chef for LT Burger in Sag Harbor, and Mr. Buffalino was looking for work, and the rest, they say, is gourmet burger history.

“What stands us apart from other burger places is our standard of preparation and combination of ingredients. We take a very restaurant approach to creating dishes and we follow a recipe and stick to it,” Mr. Buffalino said.

That consistency is what has kept customers coming back for three years, he said.

The American Puff is the fan favorite. It’s a vanilla milkshake made with Cocoa Puffs cereal and Reese’s Peanut Butter Cups and has been on the menu since the restaurant opened.

“The name speaks for itself; it’s similar to what you’d have on a summer day in your backyard,” Mr. Buffalino said. “It’s not too overdone, it’s simple and straightforward.”

His favorite dish is the Smashed Smoke. General manager Jenn Cajthaml says it’s her favorite, too, as well as being a big award winner.

The 7 ounces of certified Angus beef is smothered with caramelized Spanish onion, Mecox cheddar, peppercorn bacon, sweet ketchup and a quick blast of liquid smoke. Originally the chef tried smoking the beef, but it was too strong, then he tried soaking the beef in liquid smoke, but again it was too strong. Finally one day he just hit it with a little liquid smoke under the cheese and it was just right, he reported.

“You’re able to have smoky flavor but also you can still taste the beef ... 90 percent of the time it’s just keep trying different things until one works,” Mr. Buffalino explained.

LT Burger is a comfort food burger joint with the complex flavor combinations of dishes made by real chefs, he added.

“It has the framework of a large scale restaurant, while putting out burger-style food. The result is consistency, customer satisfaction and customer faith,” Mr. Buffalino reported.

The Cuddy is an American gastropub, opened by the owners of Sen (next door) this spring. The idea was to have a food-forward pub, serving local ingredients all prepared in-house, with micro brews and house-aged liquors, said part-owner Jesse Matsuoka.

“This place is so busy we can’t keep up, which is a good problem to have,” he said last week.

For The Cuddy, Jesse, his father, Tora, and brother, also named Tora, have once again partnered with Jeff Resnick to bring farm-to-table food to Sag Harbor. All of the meat comes from D’Artagnan purveyors, and the vegetables and micro greens are locally grown, Mr. Matsuoka said. The group also owns Sen, and previously owned Phao, which once occupied The Cuddy space.

The most popular dish at The Cuddy is The Cuddy Burger, which is ground in-house and is a blend of Wagyu, sirloin and brisket. It is grilled and served on a brioche bun with aged cheddar, caramelized onions and house-made tomato jam and dill pickles. The burger is accompanied by hand-cut truffle fries.

The signature dish is the Fried Chicken and Waffles. The chef orders whole birds, breaks them down in-house and prepares a confit in duck fat. The leg and thigh are then held in buttermilk, breaded in a 13-spice flour mix and deep fried to a moist crisp.

“We had to take one for the team and sleep with Ms. Sanders to get the recipe for that one,” Mr. Matsuoka said through laughs, referring to the international chicken chain’s secret spice recipe.

The Pan Seared Scallops are the chef’s favorite dish. The scallops are caramelized, served over grits with house-cured bacon bits, tomato jam and Panang curry.

“If anyone isn’t using fresh fish in the Hamptons they’re crazy,” Mr. Matsuoka said of the fresh local sea scallops he serves.

Just about everything at The Cuddy is made in house, including ice cream, pasta, and Brazilian rum, which ages on the bar in oak barrels.

The Cuddy is located at 29 Main Street. It is open for brunch Thursday through Sunday at 10:30 a.m., and for dinner seven days a week at 5 p.m.