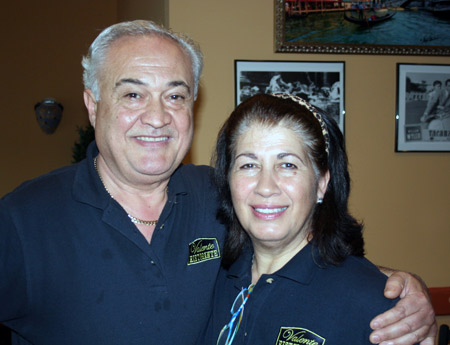 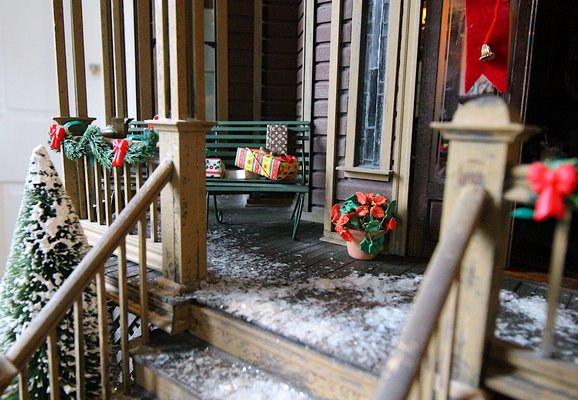 A bite of white American bread was all it took to inspire Frank Valente of Sag Harbor to immigrate to America at age 25, work 14 hours a day in the Bronx, and then go on to open up a total of three restaurants in Southampton.

Basic American white bread, though, is the last food item customers could expect to find at Mr. Valente’s new restaurant, Valente’s Pizzeria Restaurante on Montauk Highway in East Quogue. The restaurant, which opened on April 18, offers brick oven pizza, an Italian deli, and a dining room where customers can sit down and enjoy the establishment’s fine Italian food and wine.

Mr. Valente and his wife, Tommasina, opened up Valente’s Pizzeria Restaurante on April 18 and have been doing remarkably well ever since, they said. Prior to opening Valente’s, the couple owned La Capannina in Wainscott from 1990 to 1998 and Mare Chiare in Noyac from 1992 to 1994.

Before opening those restaurants, Mr. Valente had owned a pizzeria on Jerome Avenue in the Bronx in the early 1970s—just a few years after having emigrated from Italy. Mr. Valente also previously owned Bari Woodworking in Southampton in the 1980s.

The taste of the white bread that pulled him across the Atlantic from Bisceglie, a small town on the Adriatic Sea in southern Italy, was proffered to him by his uncle immediately after World War II. At that time, the Italian economy was in a major downturn and food was scarce, Mr. Valente said.

During those times, Mr. Valente learned the ropes of the restaurant business, first working as a busboy, then as a singer, all while also practicing his craft as a woodworker.

The menu at Valente’s Pizzeria Restaurante reflects Mr. Valente’s southern Italian roots, as it includes all variations of parmigiana preparation, for such staples as eggplant and chicken, and other baked Italian food specialties such as baked ravioli and baked manicotti. An eggplant parmigiana meal costs $17, and chicken parmigiana goes for $18.

The restaurant’s stand-out menu items include branzini, a Mediterranean sea bass that comes grilled and stuffed with garlic, lemon and parsley, said Joseph LaBozzetta of Mastic Beach, the chef at Valente’s.

Mr. LaBozzetta also touted his osso bucco, a veal shank that is cooked for four hours in its own juices and served over fettucine, which costs $29.95. He noted that the salmon branchi, a grilled salmon dish served with grilled vegetables, such as asparagus, zucchini, and roasted red peppers drizzled with a balsamic glaze, which costs $21.95, is also “superb.”

Mr. LaBozzetta previously owned Mama Lenore’s in the Waldbaum’s Shopping Center in Center Moriches and also worked at the Stone Creek Inn in East Quogue. He trained as a chef for four years in Rome, Italy.

The fine Italian meals served up by Mr. LaBozzetta go well with a bottle of wine—with many choices available at Valente’s—but are also often accompanied by Mr. Valente’s singing in the background. Mr. Valente sings Italian classics, Elvis and Frank Sinatra songs, and other classics. He said that while he lived in Italy, singing was his most lucrative venture, earning him about 1,000 lire per night. Black-and-white photographs of Mr. Valente singing are mounted on the restaurant’s walls.

Ms. Valente, who emigrated from Naples and met Mr. Valente in an English language class in the Bronx, makes many of the restaurant’s desserts. She offers tiramisu, Italian-style cheesecake, and cannolis. The restaurant also offers a tartufo, an Italian ice cream dessert, which is not homemade. The desserts range in price from $3.75 to $5.50.

Valente’s also offers pizzas to go and an extensive to-go menu. Mr. Valente noted that the Grandma pizza, square slices of thin pizza, is especially popular. An 18-inch version of the Grandma costs $17.50. A Margherita pizza, with fresh mozzarella, costs $22, and an eggplant parmigiana pizza costs $19.

The restaurant on the corner of Old Country Road and Montauk Highway in East Quogue ... 8 Jul 2013 by My27east
Sign in to comment