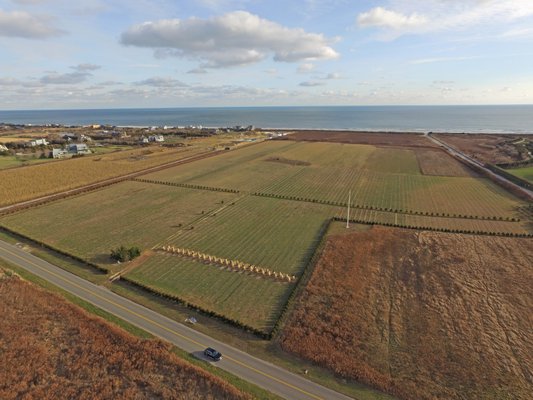 Co-owners of a large oceanfront parcel have battled over conflicting applications for the property. DCIM100MEDIADJI_0072.JPG

The issue of two conflicting applications to develop a large oceanfront parcel in Sagaponack may be settled after the Sagaponack Village Board denied one of the proposals.

The 43.5-acre property at 451 Daniels Lane is held by Sagaponack Realty LLC. Marc Goldman, one of the property owners behind the LCC, recently filed a site plan application for a single-family residence on an approximately 3-acre portion of the property, which has not yet been subdivided. Another application, from joint owner Milton Berlinski, was submitted to subdivide the property to create four lots—none of which would be where Mr. Goldman proposes to put his house.

The Sagaponack Village Board denied Mr. Goldman’s site plan at its January 9 meeting, noting that it was incomplete without providing a possible subdivision plan. The conflicting subdivision application, submitted by Mr. Berlinski, will be able to move forward after a report on the application is completed.

Despite this, the question of which owner has the right to submit applications to the village is still being determined in New York State Supreme Court. It is unclear how soon a determination will be made.

The denied site plan application called for a single-family residence in the northeast section of the property, close to the road and in the middle of the agricultural open space easement already granted to the Peconic Land Trust.

The subdivision application proposes four lots, with three of them located on the southern portion of the property, along the ocean. The proposal calls for the fourth lot to be placed north of the two southwestern-most lots, mainly because of drainage concerns. However, Village Board members have repeatedly said they would prefer the fourth lot to be positioned on the eastern border.

New York State has $373 million in federal funds available to provide home heating aid for low- and middle-income residents this winter, whether they be homeowners or renters. Applications for assistance opened Friday for the Home Energy Assistance Program, known as HEAP, which is overseen by the State Office of Temporary and Disability Assistance. ŌĆ£For so many New Yorkers, the cost of heating during the cold weather season is a major expense that can really strain their household budget,ŌĆØ Governor Kathy Hochul said in a statement last week. ŌĆ£The Home Energy Assistance Program is welcome relief for these individuals and ... by Staff Writer

My annual admonition that itŌĆÖs time to get your houseplants inspected, protected and back indoors ... 27 Sep 2021 by Andrew Messinger