Latham House: peeling back the years 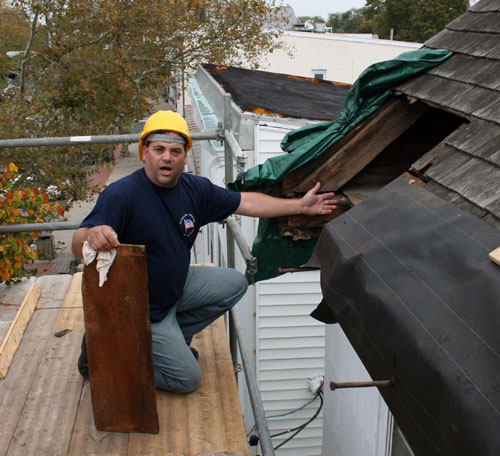 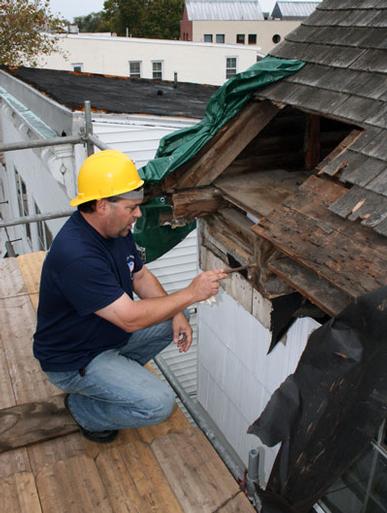 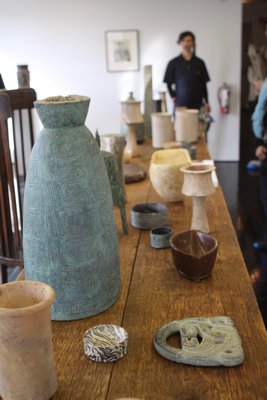 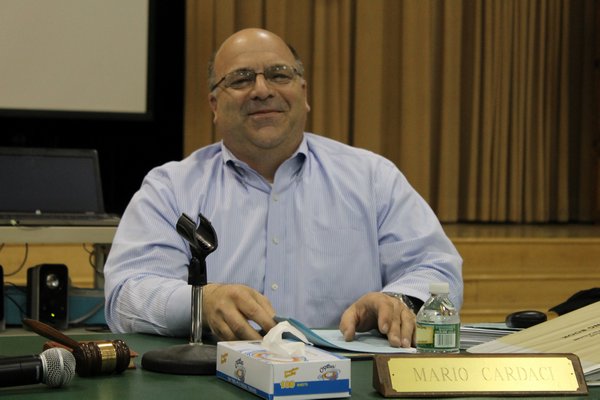 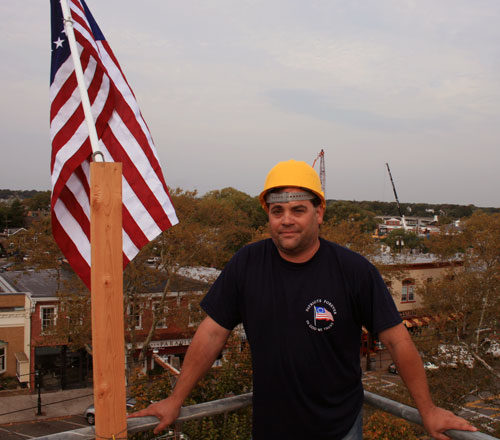 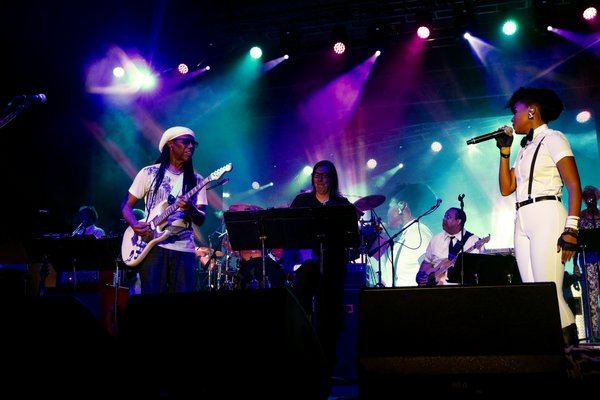 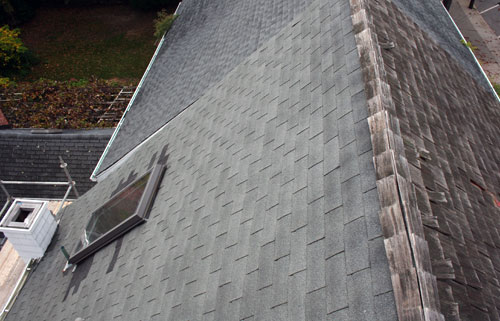 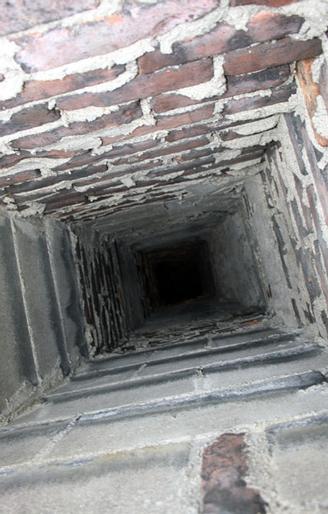 From Main Street in Sag Harbor, the facade of the historic Peleg Latham House appears much as it has for more than 200 years, but according to one builder and the home’s owner, much work must be done to restore the Federal-style structure to its original state.

Last week, Steve Monaco, owner of Westhampton’s Cedar Cove Construction, explained that he’s restoring the Peleg Latham House in exacting detail. Like a forensic detective solving a case, Mr. Monaco is pulling back asphalt shingles and tar paper like layers of time and examining what lies beneath. In the end, he said, various clues, including paint marks, nail holes and other easily overlooked details, along with historic documents he’s found through hours of research, will help him learn what once was and how to re-create it.

According to Mr. Monaco’s collection of documents, the Peleg Latham House, at 117 Main Street, is one of two Federal-style structures built around 1790 at the juncture of Main Street and Madison Street. The Latham House is on the National Register of Historic Places and is typical of homes merchants built in the era. The structure is designed to include a store at street level and living space above.

The high-end boutique Calypso currently operates out of the historic building, and to the right, the other Federal building is a private residence.

Hired by the Peleg Latham House’s owner, John Louise, Mr. Monaco said he began the restoration only this month, but the contractor is clearly smitten with the building and passionate about the history and craftsmanship of every detail. Last Thursday, Mr. Monaco explained that

the facets of the original architecture tell a different story and in order to do his job right, he’s learning all of them.

“It’s basically a time capsule,” Mr. Monaco said, noting that he found remnants of the original eel grass insulation in the walls of the home, though it’s long since been replaced by its modern counterpart. Up on a scaffold by the roof, he pointed out the original shiplap siding and the building’s post and beam frame, which uses no nails to hold it together.

“You couldn’t fit a credit card in that joint,” Mr. Monaco said after exposing part of the frame from beneath a layer of black tar paper. Nails and nail holes spanning 200 years of repairs peppered one beam and the builder said one could figure out when they were hammered by examining the nails’ various styles and placement.

“There’s no end to the stories with this stuff,” Mr. Monaco said, noting that Dutch bricks in the Latham House construction were once used as ballast in sailing vessels. “It’s just so cool,” he said, also pointing out individual hatchet marks in the home’s sturdy beams.

Cedar Cove Construction specializes in historic restorations, according to Mr. Monaco, though he said his company does all types of standard building as well. “If I could do this all the time, I’d be the happiest guy in the world,” he remarked, noting that restoring historic buildings is often expensive and always time consuming, but modernizing such structures is “irresponsible.”

Looking down from the Latham House’s central chimney, the steep, side gabled roof retains its historic wooden shingles only on the Main Street side. Hidden from view, the other side has modern, asphalt shingles, two vertical skylights and a white, aluminum gutter. The dichotomy is harsh between the sides and Mr. Monaco is pleased that Mr. Louise has asked him to eliminate all the new elements, including the skylights.

The Latham House is not the first old home Mr. Louise has hired Mr. Monaco to restore. “I’m fortunate to have a client who wants that done,” Mr. Monaco said, noting, “Most people would say, ‘just slap it up.’”

Mr. Louise has owned the Latham House for more than two years and he lives in the upstairs. He decided to have Mr. Monaco do the restoration after the roof began to leak, according to the contractor’s wife, Annette Monaco, who helps run Cedar Cove Construction.

“When you start on one thing, it snowballs,” Ms. Monaco said, noting all the extra work followed because Mr. Louise is “a lover of old homes.” He owns several and restores them all exactly as they were.

“He’s very proud of the homes,” she said.

When Mr. Monaco restored Mr. Louise’s Greek Revival home on Madison Street, he installed a Civil War era fence from Gettysburg, Pennsylvania. Mr. Monaco said he’d seen the fence in an old photograph, picturing soldiers walking by it on their way to that town’s most famous battle. For the same restoration on Madison, he looked into the home’s history and proved that a fireplace was there in order to get the Village Architectural Review Board’s approval to re-create it.

Though he’s done similar projects in the past, Mr. Monaco said he’s delved far deeper into the history of the Latham House. Research at Sag Harbor’s John Jermain Memorial Library, the internet and the Sag Harbor Historical Society uncovered a wealth of information about the house, but little to illuminate the original owner, Peleg Latham. A Latham family record from the library shows Mr. Latham was born in Sag Harbor on June 20, 1769, and he was one of 11 children, but finding information about his business was difficult, according to Mr. Monaco.

Mr. Latham was believed to be a merchant who lived above his store, according to the “Guide to Sag Harbor,” a book by Henry Weisburg and Lisa Donneson, but Mr. Monaco said records indicate he was a ship captain. Through a paid internet service, the contractor got an 1817 newspaper brief explaining that Mr. Latham captained the schooner “Maria” and carried goods from New York to Charleston, North Carolina. He died at 64 on June 25, 1833, and his grave in Oakland Cemetery reads, “Capt. Peleg Latham.”

Mr. Monaco was having difficulty finding the grave last week, and moments before driving out of Oakland Cemetery frustrated and disappointed, he stopped to make a call. In mid conversation, the builder turned his head and saw that he had stopped directly in front of the stone he’d been seeking.

The odd coincidence was just more fuel for Mr. Monaco’s growing interest in the historic home.

The restoration should take eight weeks in total and while Mr. Monaco will replicate the past exactly, he said he will use better wood and make sure the structure remains strong.

“We’ll upgrade the material, but it’s an exact replica,” he said, noting that ornamental details will be fabricated at Cedar Cove Construction’s mill in Eastport.

Explaining his passion for restoration and history, Mr. Monaco said it’s important to preserve and protect the structures which hold so much information about the past. “I’m on hallowed ground here,” he said.