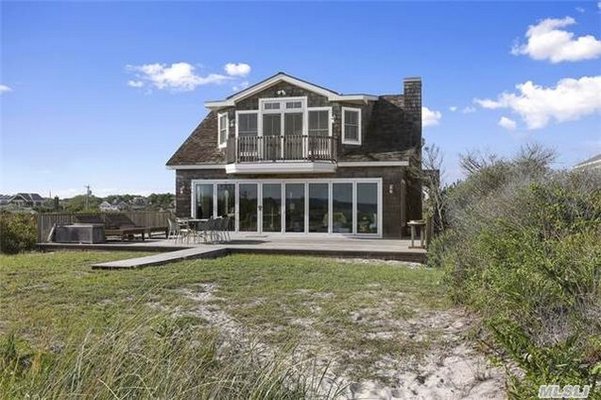 Alan Meckler, who among his other accomplishments founded Mediabistro.com, and his wife, Ellen, are breathing new life into a house in the Village of Quogue that has already had a second life.

What the heck does that mean? The Mecklers recently plunked down $5.7 million for a home on Rogusa Lane overlooking the ocean that in 2010 had accidentally been torn down by its previous owner and had to be rebuilt. It was certainly an “oops” moment in May of that year. Joseph MacLean and Marjorie Dyer had to admit to village officials that the house had been demolished without a permit, blaming the contractor.

After three years of wrangling with the Quogue government over the relevant regulations, the couple had secured approval in November 2008 to expand the structure. Work got underway the following year. Shortly before Christmas 2009, a building inspector was driving past the property when he noticed the house had vanished. The contractor, who apparently was not an expert in zoning and permits, had determined it would be easier and cheaper to simply knock the house down and start from scratch. Instead, the befuddled and embarrassed owners had to begin the permit process all over again from square one.

Obviously, they got through it and rebuilt the house because the Mecklers now own it. Alan Meckler is the chief executive officer of the Mecklermedia Corporation, which in the 1990s moved from print publications like Virtual Reality World and Internet World to internet ventures, eventually including Mediabistro.com. As the name implies, the site offered information about and jobs in several formats of media. In August 2014, Mediabistro sold its editorial properties to Prometheus Global Media, a subsidiary of Guggenheim Partners. Mr. Meckler and Mecklermedia are now focusing on producing trade shows, 3D printing projects, and Bitcoin, the international currency. His father, Herman, was a character actor, appearing in such successful films as “Hair” and “Amadeus.”

His wife must be accustomed to enterprising men. Ellen Meckler’s father made a beautiful living. At the time he died in 1989, Nathan Finkelstein was chairman of the board of Glemby International, which operated a chain of more than 1,600 beauty parlors around the world and had sales of $250 million annually. He’d also had an especially interesting experience in World War II. After serving as a lieutenant commander in the Navy in the Pacific Theater, Mr. Finkelstein was appointed to be a war crimes investigator.

The Mecklers have a daughter, Kate, who is a successful real estate broker in New York City. Her clients have included the advertising celebrity Donny Deutsch and Rachel Uchitel, whose achievements include being one of Tiger Woods’s girlfriends when he was outed as a serial philanderer.

When Mr. Meckler is not traveling—he presently operates 22 trade shows in 11 countries—he and the missus can enjoy their new digs on Rogusa Lane and its 50 feet of direct ocean frontage. The 2,600-square-foot home has four bedrooms, three baths, and upper and lower decks. If any movie location scouts are in the neighborhood, the Mecklers might welcome them— their previous manse in Southampton was the setting for Jack Nicholson and Diane Keaton finding romance in “As Good As It Gets.”