A Visit To The New Gardiner Mill Cottage Gallery - 27 East

A Visit To The New Gardiner Mill Cottage Gallery 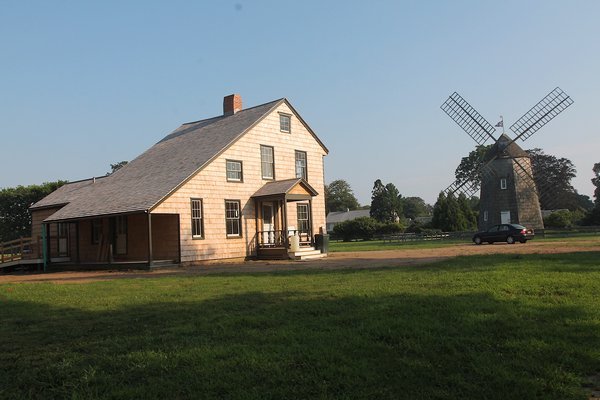 In a town filled with many hidden jewels, the Gardiner Mill Cottage Gallery is East Hampton’s newest gem. Inside the saltbox museum, historic landscape paintings adorn the walls while an agricultural scene beckons outside the leaded glass windows, harking back to more bucolic times.

Robert Hefner, director of historic services for the Village of East Hampton, said the important thing about the property is the land, which was Lion Gardiner’s home lot in 1648. The three and one-half acre property adjoins a one and one-half acre easement totalling five acres of open space in the heart of the village.

The town and village purchased the property for over $9 million in 2014. At the time, there was an unfinished modern home on the property which was torn down to create an open field. The village currently leases the land to Balsam Farms where they use it to bale hay.

Next door, on James Lane, is the Gardiner Mill, erected in 1804 by Nathaniel Dominy V. Built from Gardiners Island timber, it was used to grind grain until 1900. Later, Wintrop Gardiner, Jr. used it as a clubhouse, a predecessor to the man cave, where his friends gathered to play cards. Across the street, the South End Burying Ground is the forever home to Lion Gardiner, who died in 1663 at the age of 63.

The property stayed in the Gardiner family until Billy Gardiner put it on the market. The village, loathe to see the historic land developed, used Community Preservation Funds to purchase the property and restore the saltbox to the era when it was used as a summer rental by the painter Percy Moran, from 1902 to 1916. His painting “Fresh Pond, East Hampton, Long Island August 15, 1916” is on view, situated above a Dominy desk.

Percy Moran was the nephew of the famous Hudson Valley School painter Thomas Moran, who owned a house on the other side of Town Pond, which is now a museum. Percy was the son of Edward Moran, Thomas Moran’s older brother and teacher, who was also a painter.

Originally the house was built around 1750 and that timber frame still exists. A photograph from 1870 depicts the building as a storage barn, but when artists began renting summer homes, the house was moved closer to the road and renovated.

Another, 1887 photograph by Sag Harbor’s Wallace Tooker was studied by Mr. Hefner, who designed the plans for the restoration.

“The details from the photo are unbelievable,” he said.

The windows, front porch, two corner fireplaces and the stairway were restored and a 1930’s addition was removed.

The cottage still sits on its original brick foundation. A handicap access and a bathroom were added in the location where a kitchen might have been. Some large trees were removed from the property opening it up to the sun. “The house looks so much happier,” said Mr. Hefner.

Richard Barons, East Hampton Historical Society's chief curator and consultant for the village, curated the first exhibit in the gallery. The collection of 50 paintings are intimate in scale, and breathtaking in their beauty. These are all landscape scenes we are familiar with, albeit more cows, a lot less houses, and sometimes, a stream added here or there for painterly effect.

The gallery will feature changing exhibits about the early summer colony. “It makes a nice gallery space,” said Mr. Barons. “It’s insulated and climate controlled so we can borrow from Parrish Art Museum.”

The village is slowly amassing a group of paintings from the mid- to late- 19th and early 20th centuries in order to learn about the works of the early summer colonists who stayed in East Hampton anywhere from a few days to several months.

Terry Wallace, who owns a gallery in the village, donated some paintings while others were purchased with the help of the Gardiner Foundation. One of those paintings is titled “Hither Plain, East Hampton, Long Island, 1890” which is described as one of Henry Golden Dearth’s early masterpieces.

“It is delicate, refined, and imaginatively painted in a wet-on-wet technique with flecks of burning color against a shadowy dunescape,” Mr. Barons wrote in his description.

It is a stunning view of the dunes on the horizon. The sky is painted in shades of bright blues, the horizon is sunkissed gold, and the dunes are lilac, aloe and peach. The original frame was designed by the famous architect Stanford White, not in the typical baroque style of the times but rather a much broader design in the neoclassical style.

Alec and Hilaria Baldwin also gave a group of four paintings to the village specifically for the gallery show. “Sand Dunes and the Stone Boundary Wall at Montauk” by William Sartain, “illustrates the stone wall built at Fort Pond beach in 1822 to keep the storm surf from washing into the pond and making the water unsuitable for cattle and sheep to drink.”

Mr. Barons and his wife Rosanne lent or donated works from their collection, including the small yet spectacular “Montauk Bluffs,” an etching circa 1930 by Zella de Milhau which is recognizable as the cliffs of Shadmoor. Ms. de Milhau studied with William Merritt Chase at his summer art school in Shinnecock Hills, and later printmaking with Mary Nimmo Moran. She kept a small cottage in Montauk called “Pirates Cove” and was known to fly a Jolly Roger flag.

When Mr. Baron first saw the painting, “The Old Pantigo Mill at East Hampton, Long Island circa 1885” in the East Hampton Library’s collection, he assumed it was by Thomas Moran, and wanted it for the show. As it turned out, it was painted by his wife, Mary Nimmo Moran, who normally did etchings. It is a rare and haunting painting by the first woman fellow elected to London’s Royal Society of Painter-Etchers in 1881.

The Gardiner Mill Cottage Gallery landscape exhibit is a reminder of why artists came to East Hampton in the first place. Nature shines through each and every brushstroke. It’s not big and it doesn’t scream. It gently whispers, “Don’t let it go.”

Customers give Irina Ourusoff pictures of their dogs and cats and she’ll happily convert their ... 3 Jan 2020 by Kelly Ann Smith

The kambô practitioner cut lines of finely ground mapacho in the palm of her hand ... 25 Nov 2019 by Staff Writer

A War Hero, My Hero

Firewood Month is wrapping up, but Bat Week is in full swing. I’m thinking the ... 29 Oct 2019 by Staff Writer
Sign in to comment