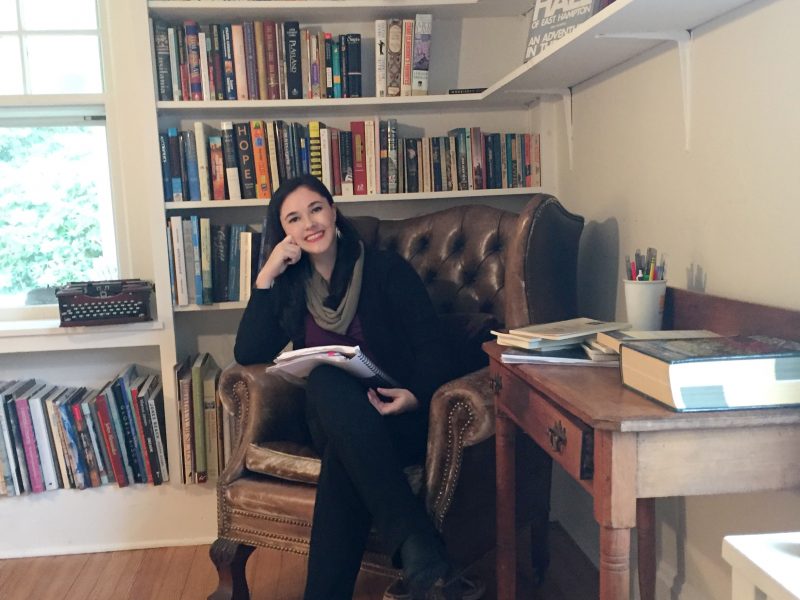 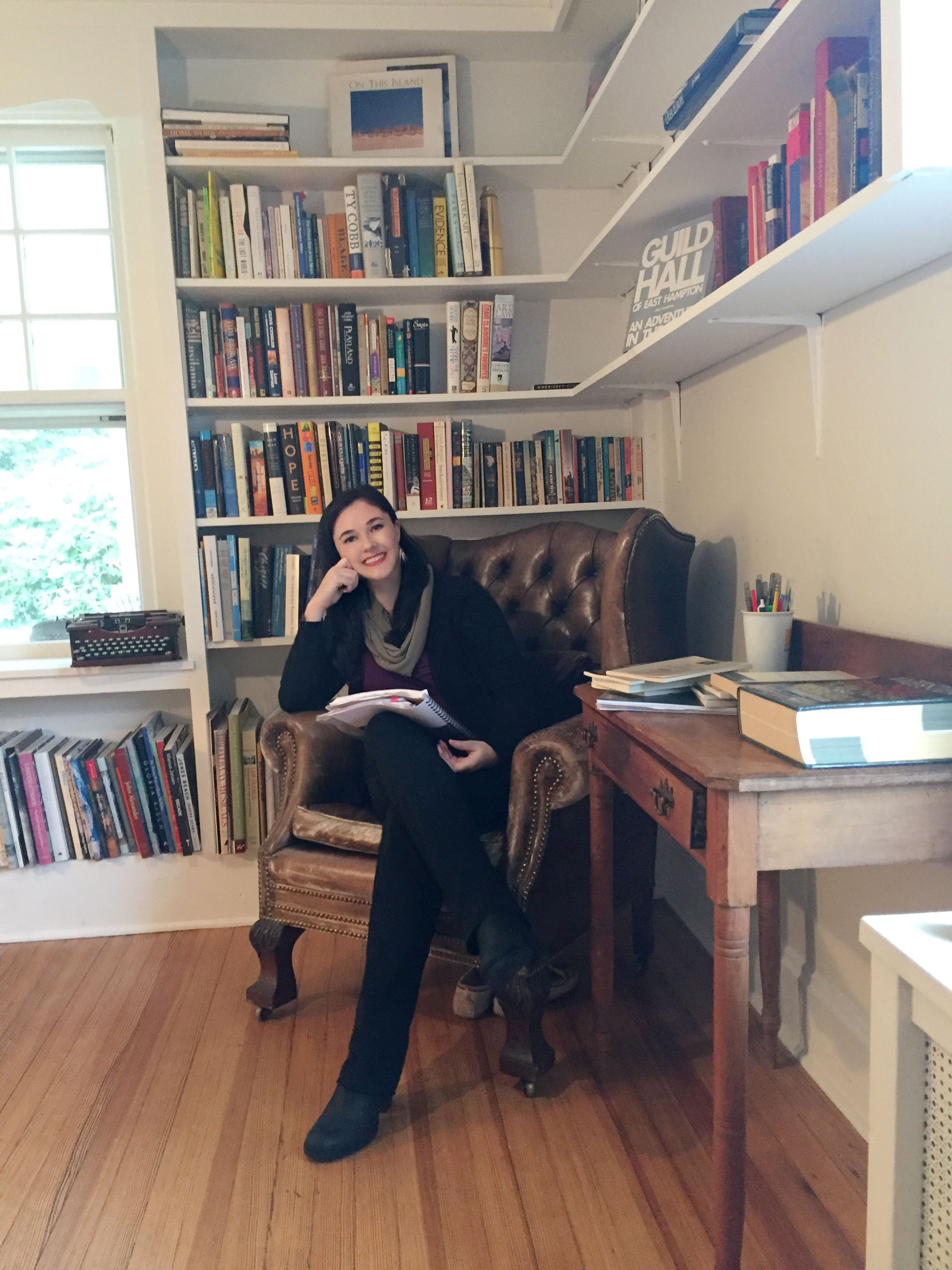 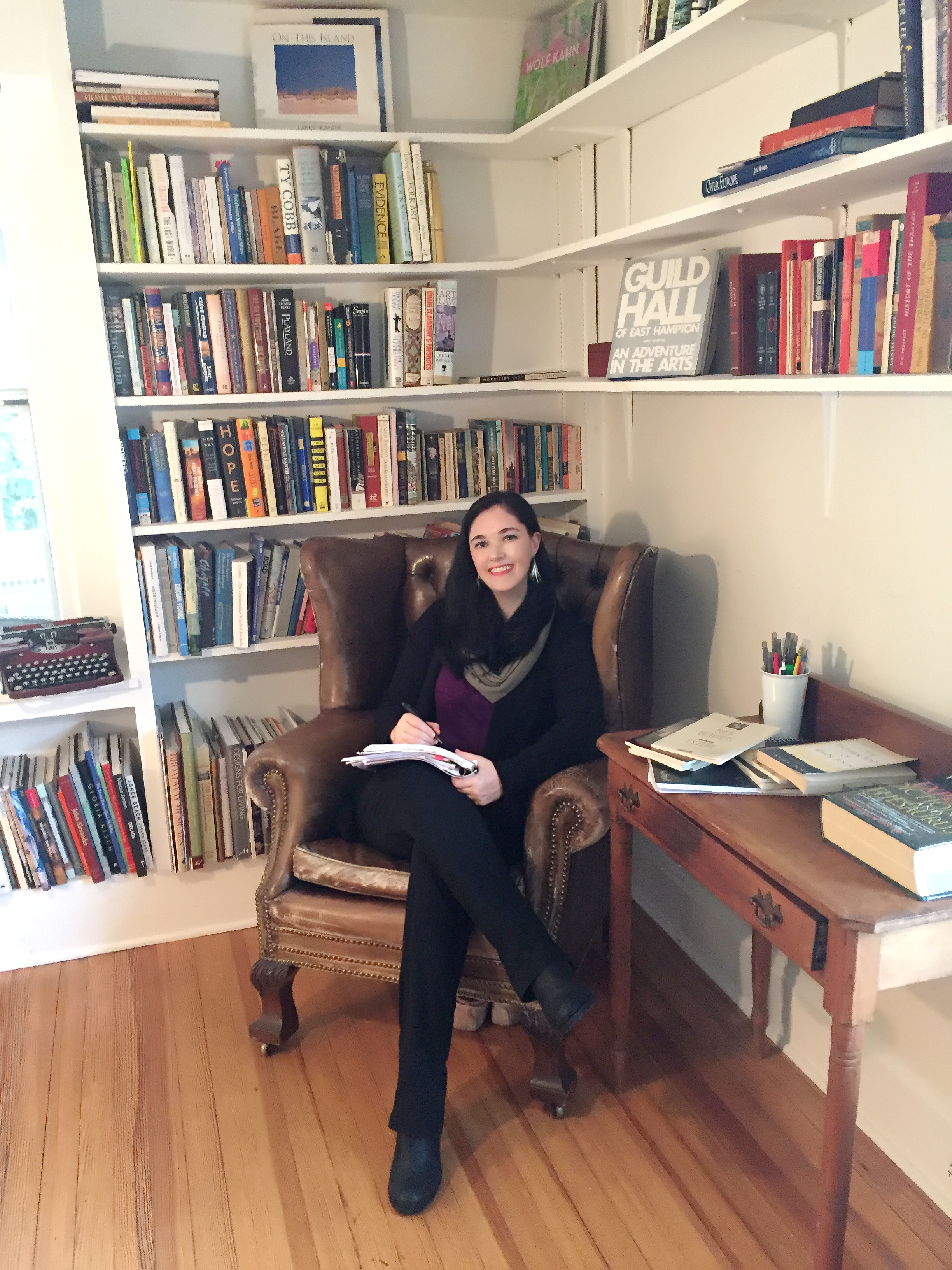 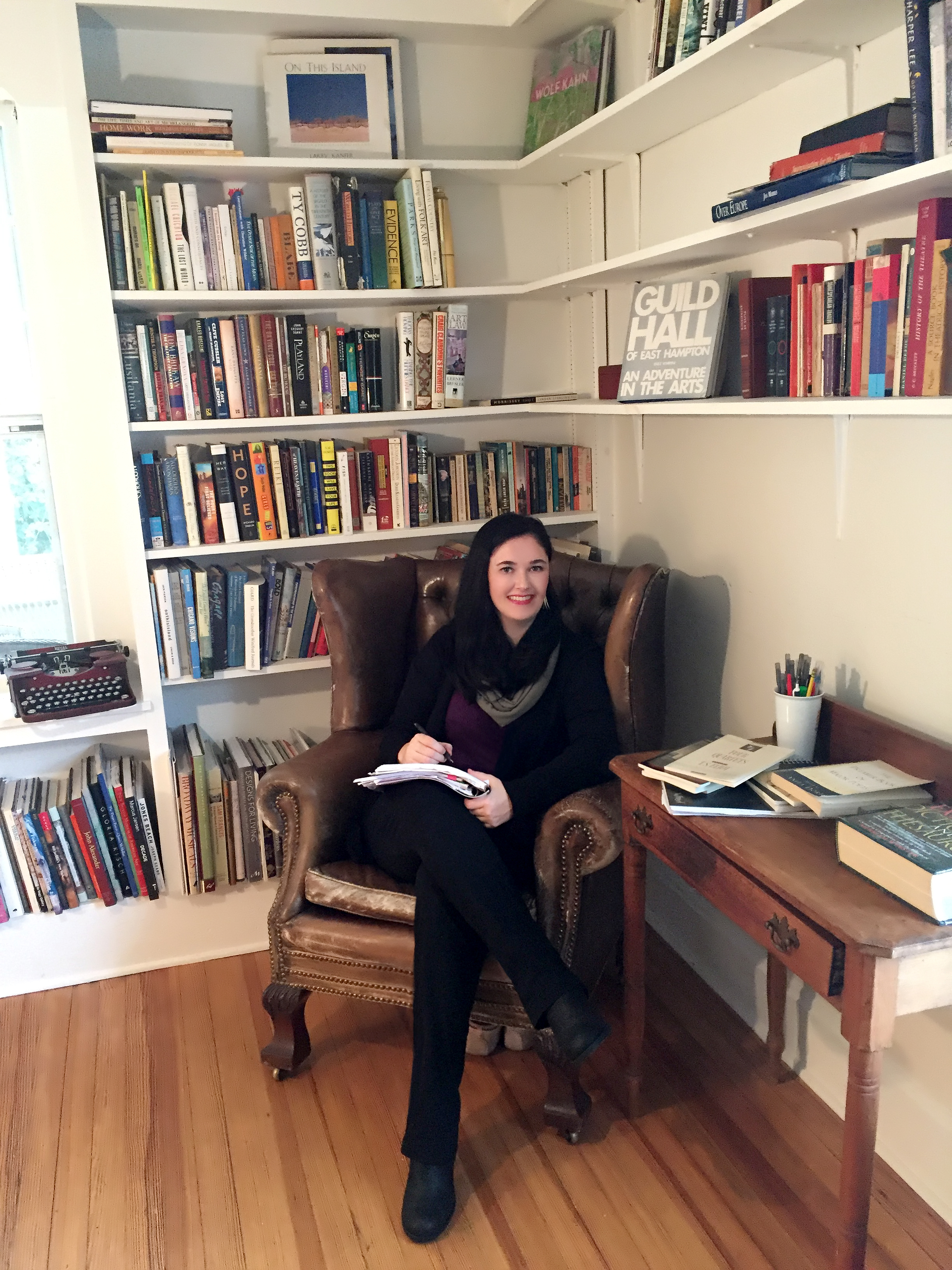 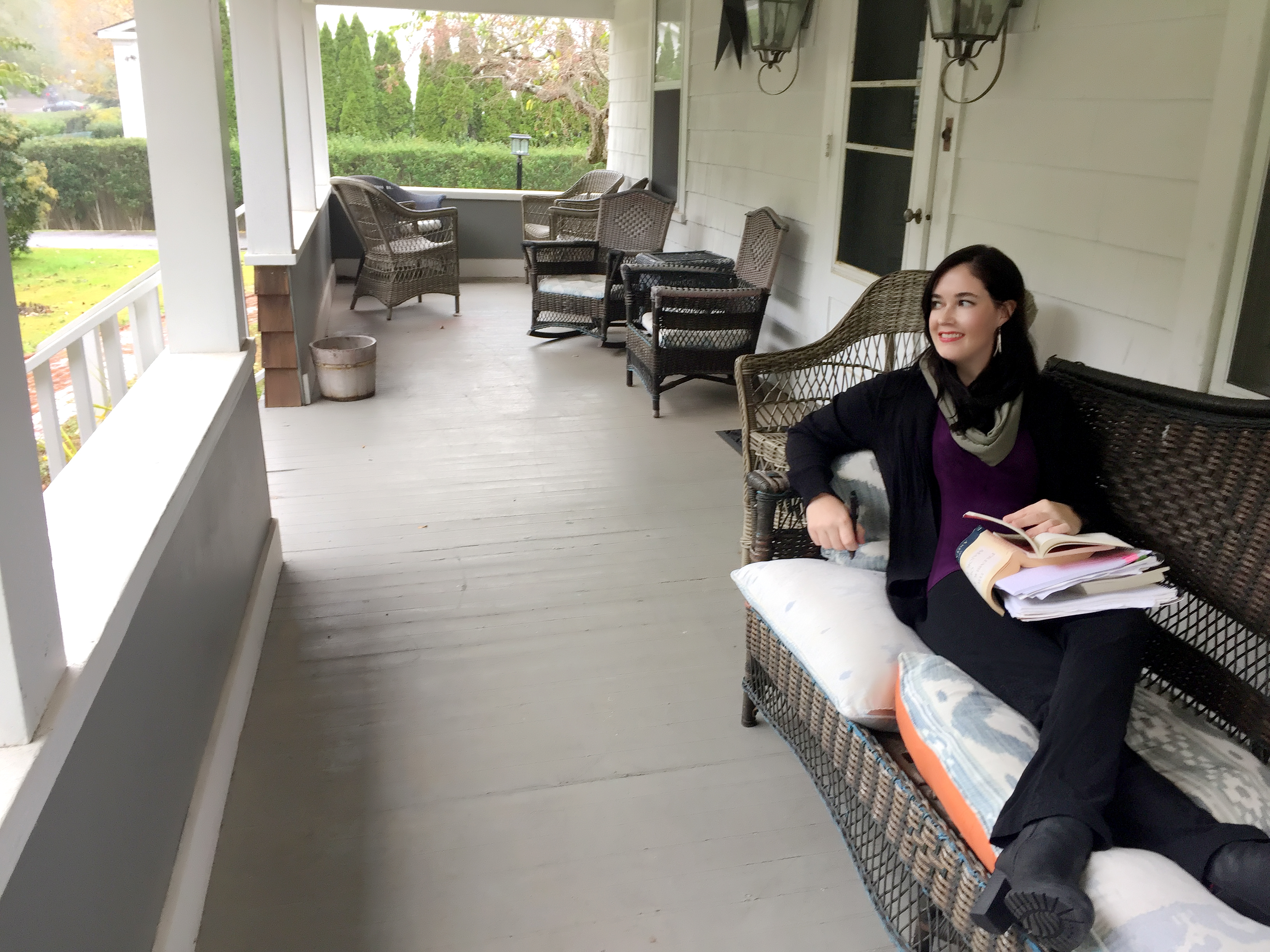 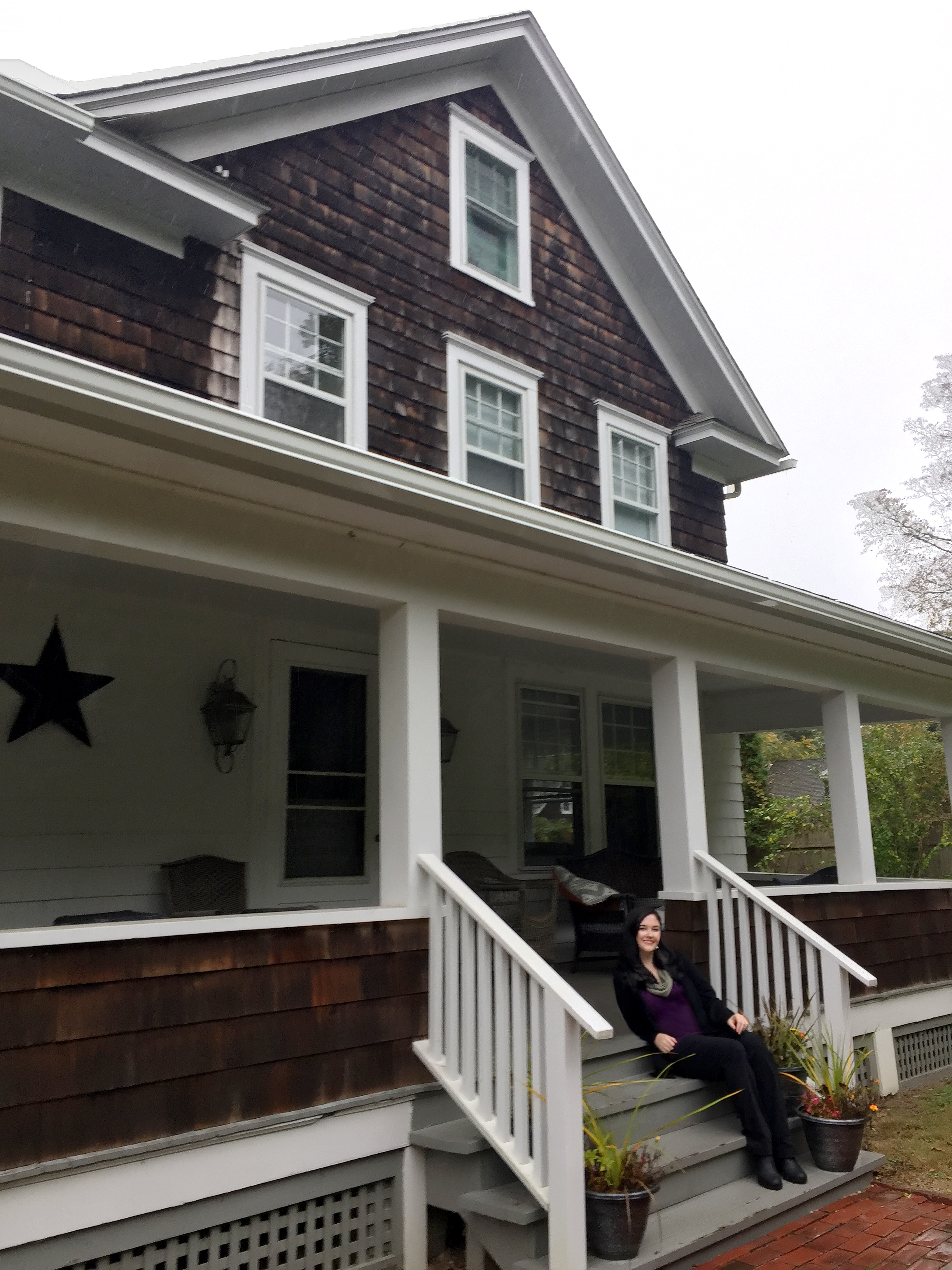 Guild Hall has brought Caitlin Doyle home. She left her parents’ home on Wooded Oak Lane in East Hampton after receiving a scholarship to attend Miss Porter’s Boarding School in Farmington, Connecticut, when she was 14 years old.

After attending college at the University of North Carolina at Chapel Hill, earning an MFA in Poetry at Boston University, receiving a Ph.D. through the University of Cincinnati, and living in numerous locations around the country as a teacher, visiting writer-in-residence, and residency fellowship recipient, she is thrilled to return to the East End as a Fall 2019 Guild House Artist-In-Residence.

She’s currently living in the shingled house behind Guild Hall with visual artist Luisa Caldwell and playwright Dipti Bramhankar. More importantly, she is close to her parents, Joanna and Sean Doyle, who instilled in her a love of literature.

Doyle has wanted to be a poet since she was eight years old.

“I remember the magic of falling in love with poems for the first time,” she said. “Very specifically, they shimmered to me.”

Although she may not have understood the full complexities of their meaning, the way the sounds of Edgar Allen Poe and Robert Louis Stevenson made her feel stayed with her throughout her life.

“I’m always trying to access that,” she said sitting on a comfy couch in the formal living room of her temporary home.

Guild Hall, BookHampton, the East Hampton Town Marine Museum, and the Odd Fellows Hall in East Hampton and Canio’s Books in Sag Harbor, where she gave her first reading, were all instrumental in her development as a poet.

“Having attended many Guild Hall events while growing up, I’m galvanized by the opportunity to spend time here focusing on creative work, collaborating with other artists, and undertaking community arts initiatives,” she said. “I am especially eager to implement arts programming at the St. Michael’s Senior Housing Development in Amagansett, where my father currently lives.”

She credits her father, originally from Dublin, Ireland, for searing the literary arts into her head. He was known to recite poetry at the drop of a hat and regaled her with stories about writers who came into The American Hotel in Sag Harbor, where he worked as a bartender.

Her first poem was published thanks to her father who sent his eight-year-old daughter’s poem to the East Hampton Star. “It was about night,” she said. “‘The night is dark and fills us with fear/The owl’s hoot I tremble to hear.’ I don’t remember the rest.”

That’s a pretty good start. Sitting in the pews during Catholic Mass at Most Holy Trinity Church impacted her sense of the word as sacred.

Memories of musical productions such as “Kiss Me Kate,” “Guys and Dolls” and “Oklahoma” rushed back to her as she entered Guild Hall for the first time in years. Aside from the sonic echoes, one of the joys of attending plays at Guild Hall, was seeing neighbors, teachers, and friends’ parents, transform as performers on the stage.

“My brothers and I even appeared in a Guild Hall production of ‘Our Town’ when we were in elementary school, which allowed me to make my glittering theatrical debut as a third-row corpse in the Thornton Wilder’s much-famed graveyard scene,” she recalled.

Church masses, musical theater and lyrical poems such as one of her father’s favorites, “The Rime of the Ancient Mariner” by Samuel Taylor Coleridge, all use language that engages the listener or reader with their meter and rhyme.

“If it sticks in the mind, you find yourself drawn to repeat it over and over,” she said. “Time is passing. You want to build something that has a chance of sticking.”

One of Doyle’s well anthologized poems “The Doll Museum,” can be found on the Poetry Foundation’s website. Originally published in “The Warwick Review,” the rhyming couplets ring back to her first poem, and early influences like Poe.

“The doctor’s knife/could not have caught my sister more off-guard/or left me less alone; I had my dolls./Though, soon, they lay on tables in the yard/with price tags. Even then they looked alive,/survivors with no sickness to survive,” the poem concludes.

“Her poetry is ‘strategic’ in that it feels as if the words have been carefully held back until they are just right for the moment,” Ted Kooser, who served as United States Poet Laureate from 2004 to 2006, said of Doyle’s work.

“I wish I could spend all my days on earth rhyming,” she said wistfully. Of course, not all poems rhyme. Some may say that contemporary poets have lost the art of traditional form. Worse yet, they’re unaware of poetic prosody altogether.

Meter or not, Doyle will not be pigeonholed as a poet. She respects and writes in the art of free form too.

“Poetry should be, for me, the combination of high and low,” Doyle said. “Accessibility combined with complexity.”

She’s looking to continue to teach poetry at the college level while simultaneously working on her first book, which can be a tricky proposition. There’s no doubt, however, she will accomplish both tasks with the determination. I’m thankful for people like Doyle who are passionate about teaching poetry in today’s fast paced and technological world, where society doesn’t place much value on internal life.

“Everything is telling them, ‘This isn’t important,’” she said.

Students can initially be intimidated by poetry’s hidden meanings she added. They don’t want to risk being wrong, but that would be to their detriment.

“I want students to let their guards down,” she said. “Let the sound tell them what it means, not pressing them about what it means.”

Doyle’s goal is to keep the art form alive, not just because a student may or may not become a poet, but because poetry should be a part of people’s lives. She wants to inspire people to read poems to their kids at night, bring a book of poems on the bus or to the beach.

“I want to give that gift,” she said. “I want them to know that poetry exists for them. It’s theirs.”

On Friday, November 22 at 6 p.m., Caitlin Doyle will read at Canio’s Books, 290 Main Street, Sag Harbor. Check her website caitlindoylepoetry.com for updates on other local events as the month unfolds.

Healer Lauralee Kelly has always been on an exploratory path to get to know herself. ... 23 Jun 2020 by Staff Writer
×