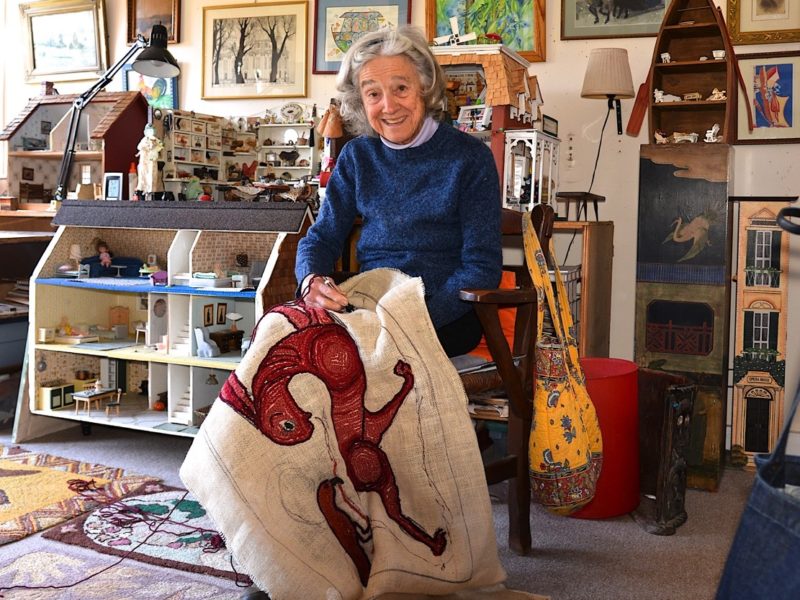 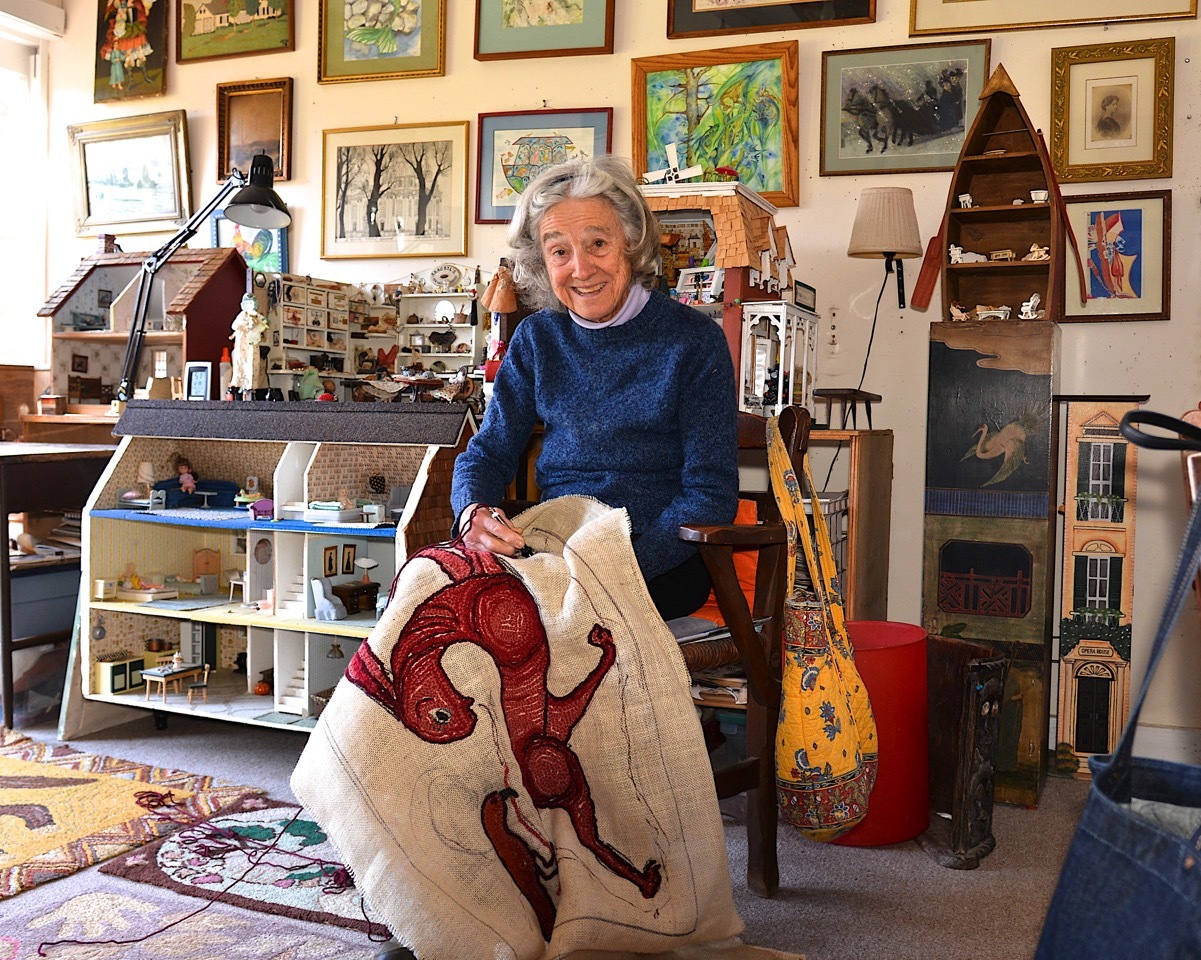 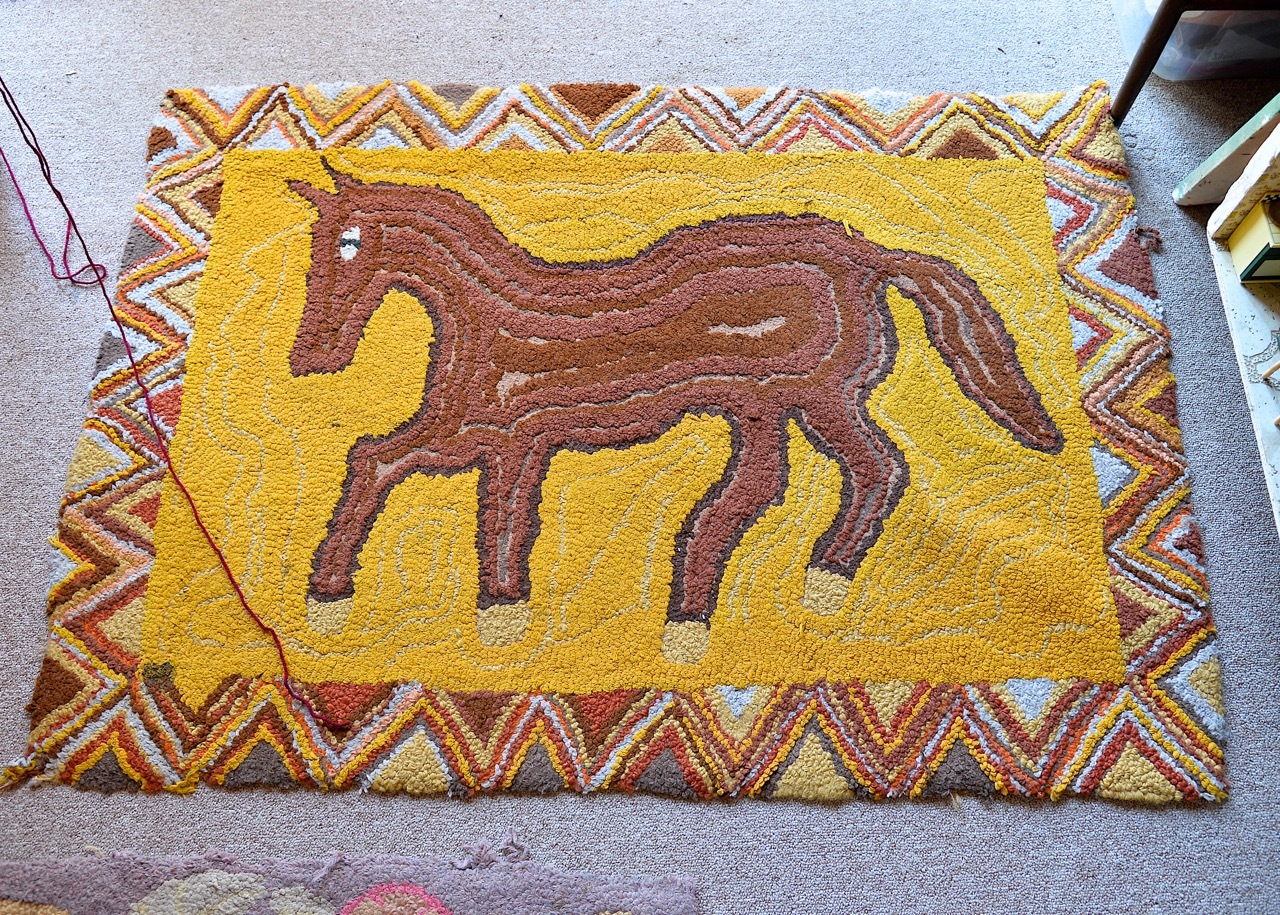 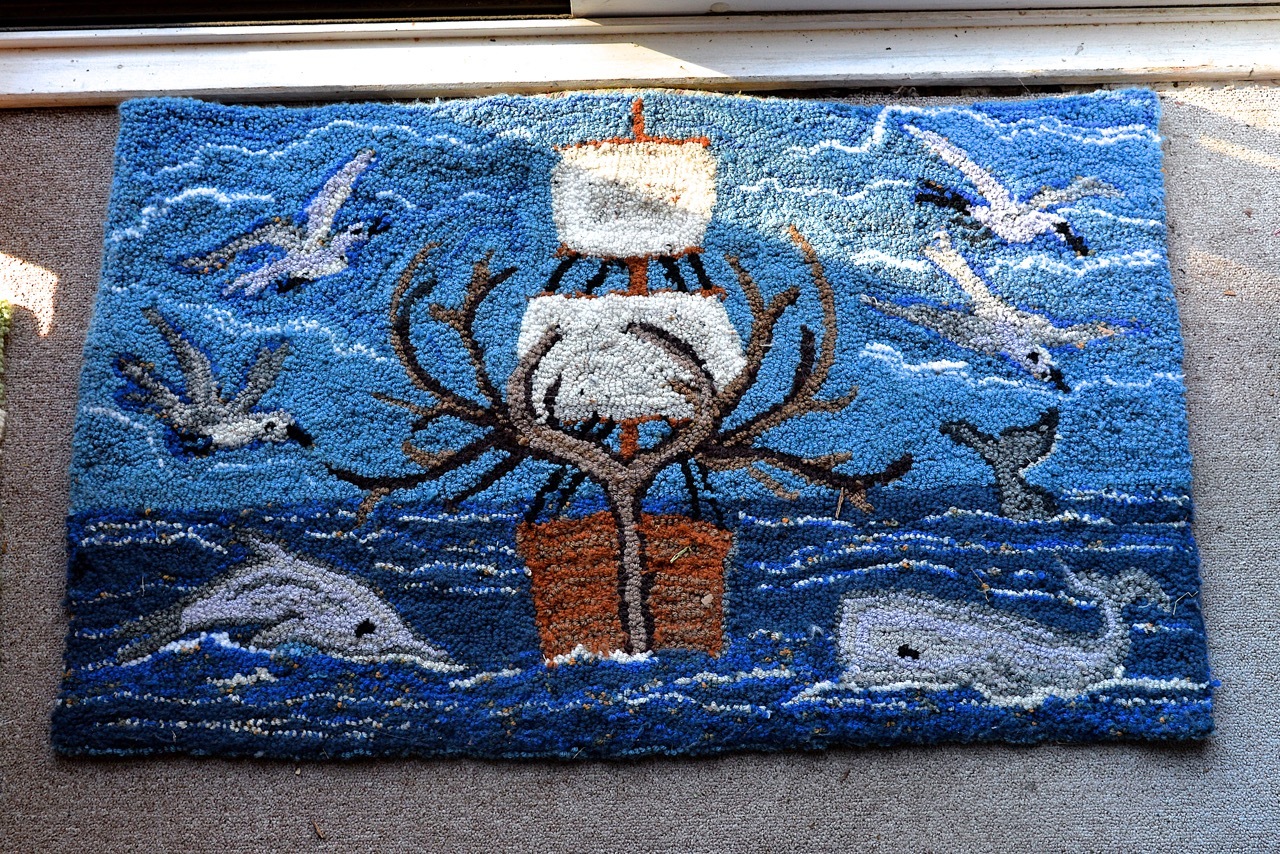 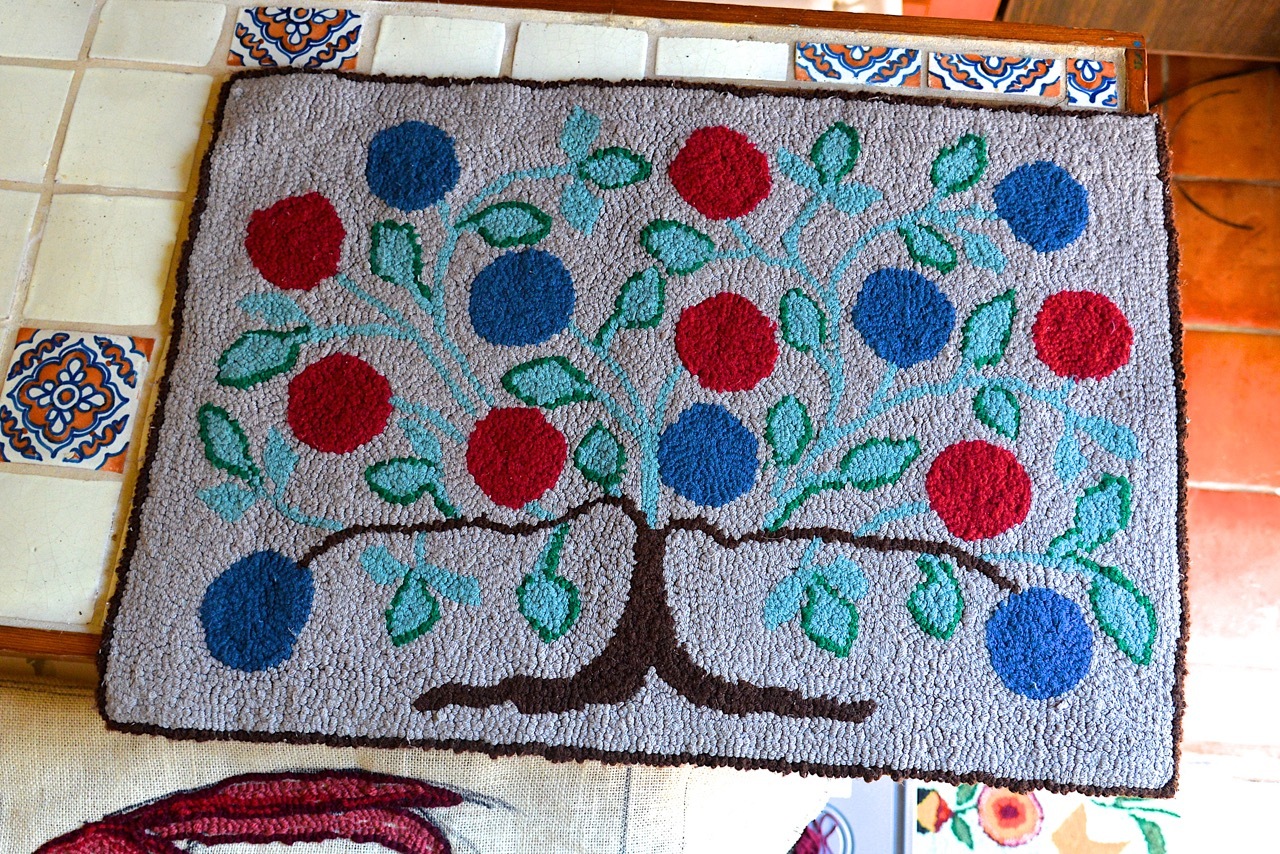 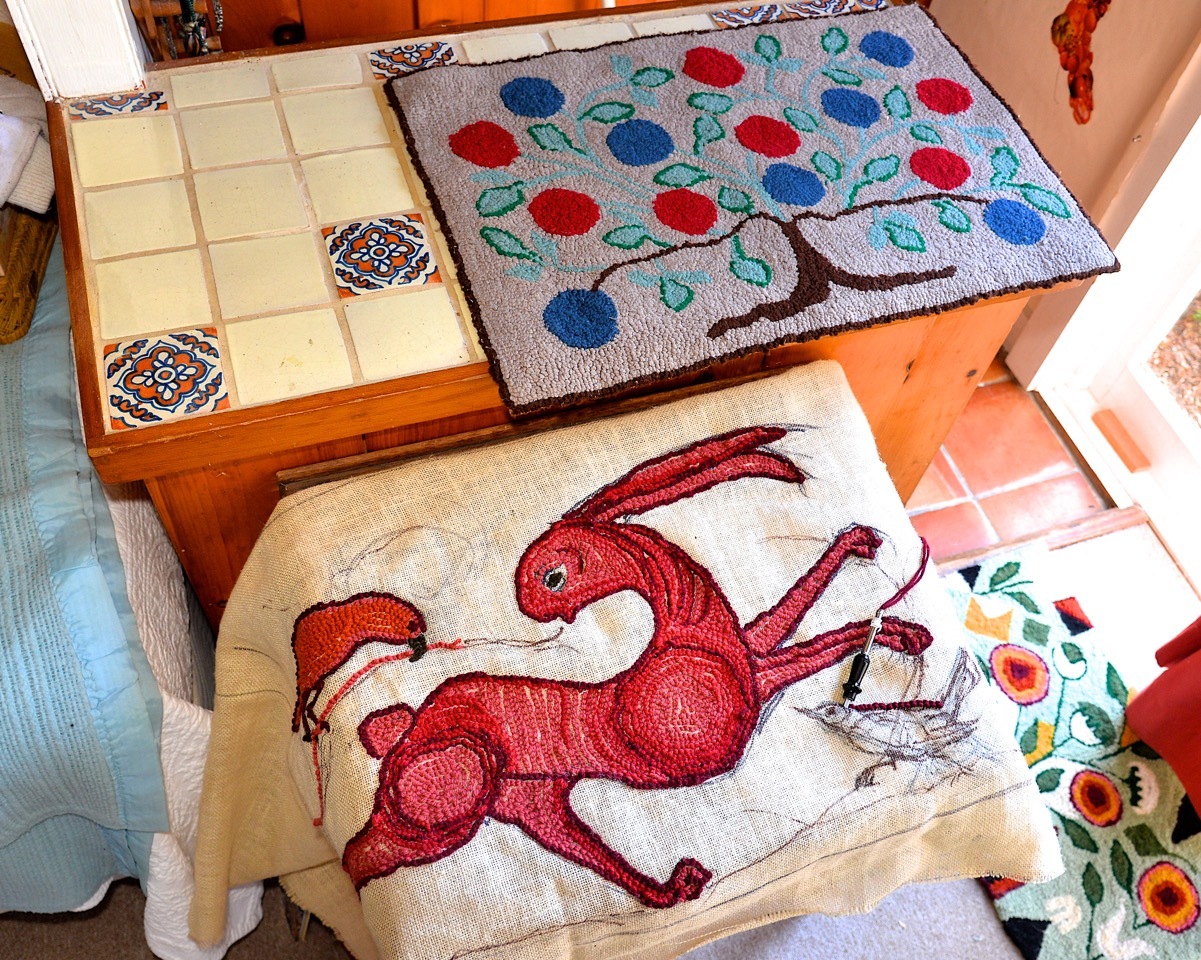 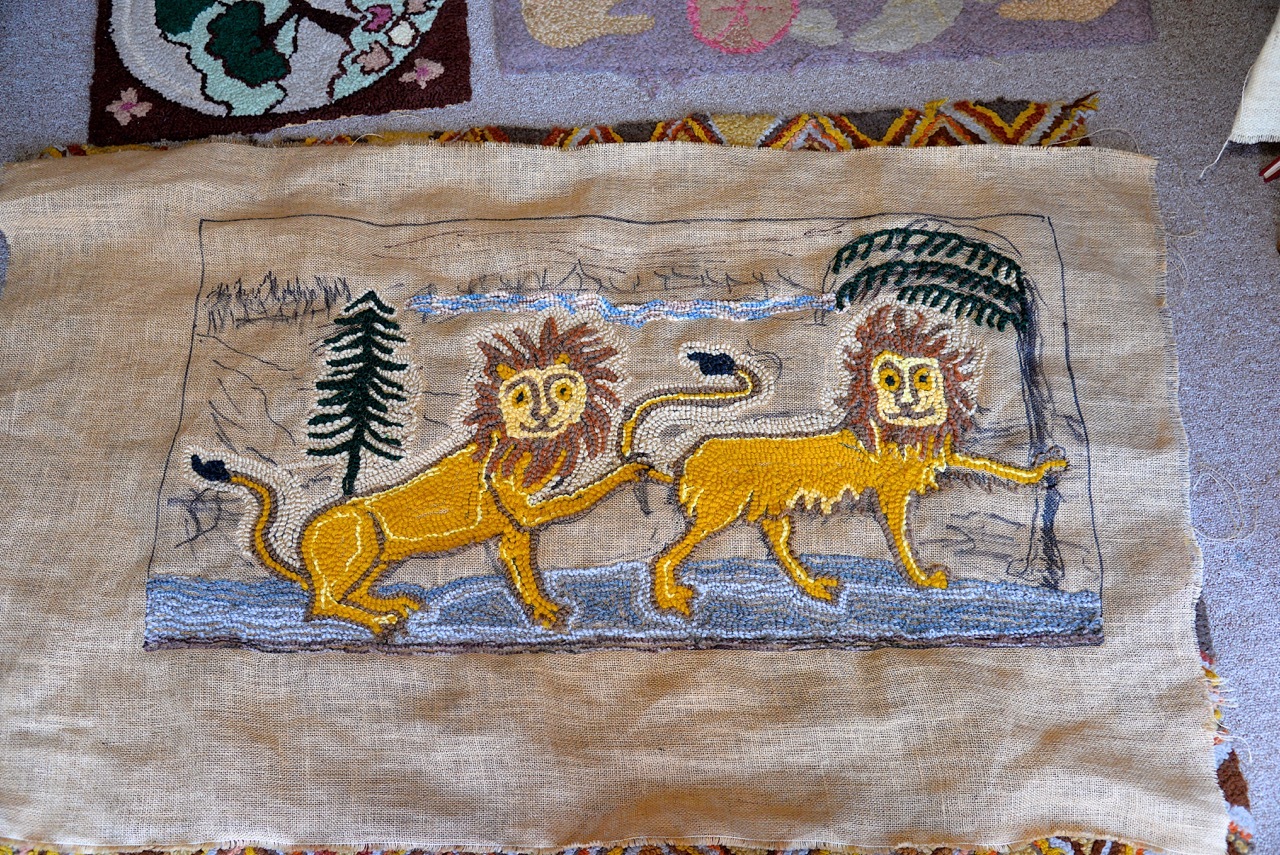 Customers give Irina Ourusoff pictures of their dogs and cats and she’ll happily convert their beloved pet into a hooked rug, but she doesn’t have to love it.

“People are thrilled to have their bloody pets,” she said as she flips through pages of pugs, poodles and all kinds of pooches in her cozy studio.

It’s a damp and dreary January day. The 83-year-old had just put down her rake in the yard. “I’m a little late,” she said, nodding toward a pile of leaves.

She also manages five 10-acre estates as a gardener. “I weed, I plant, I prune,” she said. Outside her windowed door, birds stop in the stone birdbath and on birdhouse stoops.

I instantly fell in love with Ourusoff when I met her at the Amagansett Life Saving and Coast Guard Station. She was working on a rug of sea life at the holiday craft fair nestled in the dunes on Atlantic Avenue.

I offered to buy the rug then and there.

“It’s not finished,” she said.

She proceeded to throw it on the ground and stepped on it, in order to show me what she had for sale on her table but I couldn’t take my eyes off the ecstatic scene of dolphins and whales jumping out of the sea

“It’s not finished,” she repeated and I left with a smaller rug with even more intrigue. It was a primitive scene of a man and woman spearfishing from a dugout canoe, like something you might see in a cave drawing.

Ourusoff was born in Brussels, Belgium in 1936, an only child. When she was three, her parents walked her out of the city on a bicycle. The fear was that her father, an engineer who spoke several languages, would be picked up by the Germans on his way to work.

The family ended up in Paris where her father worked as an interpreter.

“He was sent to the Nurenburg trials. That’s how we came to the U. S.,” Ourusoff said. “Lo and behold, he had a job and visa because of language.”

In 1948 they landed in New York and he worked at the U. N. where his daughter would work years later as a trilingual guide for a decade. When she was pregnant with her own daughter, she hid her belly behind an information desk.

Earlier, Ourusoff studied graphic design at Parsons School of Design in Manhattan. She put in another 10 years at an investment firm, the most stressful, yet thrilling job she’s had in her life. And yet another 10-year stint in New Hampshire, where she learned to grow flowers and vegetables, while living on a 10-acre nursery

Her parents bought the house in East Hampton in 1960 and most every weekend since, she’s traveled out from the city. When she was 60, she moved out east full time and is very involved in her community.

She keeps her body moving with yoga and walking miles on the empty beaches. She engages her mind by playing bridge a few times a week, and reading into the night. She attends 12 operas, and takes one big trip a year.

She lends her time to the Ladies Village Improvement Society, the East Hampton Historical Society, Guild Hall, LongHouse Reserve, and the East Hampton Artist Alliance. “East Hampton has a huge amount to offer but you have to give,” she said. “I show such enthusiasm.

She eats properly. For six months out of the year, she picks her own vegetables at Quail Hill Farm in Amagansett.

“Digging potatoes and carrots is a huge job but it paid off during Thanksgiving and Christmas,” she said. “I haven’t bought anything at the store.”

Like many artists, she gets inspiration from her travels. She admired the simplicity and colors of the ceramics in Cuba, when she stayed with a local family last year. “I don’t do what tourists do,” she said. “I pay a taxi driver and say, ‘Show me art.’”

When her grandchildren were born, Ourusoff started painting animals which evolved into a series of Noah’s Ark paintings, each one different from the last. She moved on to sand castings and doll houses.

Her work is categorized as “naive,” “folk,” or “outsider” art and she’s been at it since childhood. She still has a few drawings from back then and although the colors and strokes are as you would expect from a child, the subjects are not.

A wristwatch drawn like a flag across a skull, an alien frog-mermaid, a bloody cross with a fire-breathing snake are just a few of the macabre subjects.

“Doodles as a kid,” she said, still amazed at what came out of her own mind. “Now it’s become weird rugs.

“I’m trying to make it more happy,” she said.

A man, whose astrological sign is a Leo, commissioned her to come up with a lion rug, so she drew two. She first draws a sketch on paper and then enlarges the image with a marker onto a piece of burlap.

“The same stuff you see wrapped around bushes in the winter,” she said.

The lion pair include “a grouchy man and smiling woman,” but the rest has yet to be determined. “I might add mountains. I might add more trees. I just like faces,” she said. “I make it up as I go along.

Her only tool is a punch needle not a push hook, hence the name “hook” rug. “You can do hook rugs with a hook but it’s slower,” she said. “This is modern. Result is the same.

“I sit and punch every little step,” she added. “I do that at all the shows so people know it’s handmade. You can’t buy it online. I’m not cheating. I’m doing it step-by-step.”

Her yarn is a cotton mixture so the rugs are affordable, durable and washable. She hand-washes hers in the bathtub and hangs them to dry.

The rugs are lined with a special rug glue that holds the yarns together, making it thicker and preserving it. Then she hems the burlap over the glue backing. She can repair frayed edges or holes worn by chair legs, but that’s not going to happen any time soon.

In addition to the lions, she’s working on a ruby red rabbit with long ears and limbs, joyously jumping alongside a bird. The simple curved lines are breathtaking. Sometimes people buy the rugs to hang on a wall. The artist disagrees with that concept. “No, it’s a rug,” she said.

I couldn’t leave my new friend without requesting a commission with all of her favorite themes, as they are mine too. Mermaids, whales, owls, clipper ships and the sea. But I better keep up with her this time.

“If I see you next year, I’ll be doing something different,” she said.

Instead of champagne, I served Channing Daughters Pétillant Naturel when friends visited this past Valentine’s ... 17 Feb 2020 by Staff Writer

Artist Carly Haffner’s parents met as neighbors in Berkeley, California. In 1983, they drove across ... 10 Feb 2020 by Staff Writer

A Visit With Decoy Carver And Bonacker Dave Bennett

Movers And Shakers: Part One

Charity Joy Robinson was excited to talk about her new Afro-Caribbean dance mix-up, held at ... 21 Jan 2020 by Staff Writer

The kambô practitioner cut lines of finely ground mapacho in the palm of her hand ... 25 Nov 2019 by Staff Writer
Sign in to comment