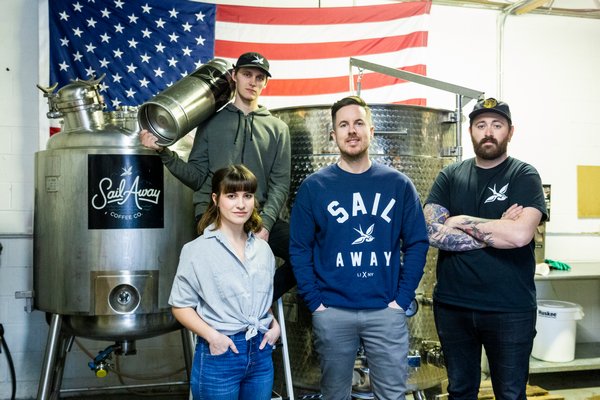 If the trends continue, it will not be beer, wine, or spirits that become the “it” beverage of the next few years. A health-conscious millennial population is moving toward a more sober state of mind, and that means eschewing alcohol for other exciting beverages. And the market has embraced the move. Among all of the subcategories of booze-free drinks, coffee continues to rise in popularity, fueled, in large part, by innovators who have elevated the simple cup o’ Joe to something outstanding. Take Christopher Vetter, for instance, the Melville native who founded Sail Away Coffee Co. in 2015.

“I was a touring musician prior to this, and pretty much my inspiration came from routine coffee stops and touring,” Mr. Vetter said. “I started researching different flavor profiles then decided to launch my own brand.”

“We started brewing out of a small facility in Melville before we moved to our own facility in Deer Park. We launched our first bottle of cold brew in October of 2015 and then launched our nitro on tap in November of 2015,” Mr. Vetter explained. “People really loved the ‘on-tap,’ and the fact that they could get it and bring it home with them was big for them.”

The cans are now available in grocery stores throughout Long Island.

The company is an ode to artisanal coffee drinking, combining technology with innovative sourcing. Mr. Vetter tasted coffee throughout the world, before deciding on an appropriate blend for his brand, which he described as “primarily Kenyan and Colombian.” He leaves the finer details to a trusted, private roaster, who has cultivated relationships with farms and farmers.

In order to make this smooth, chocolaty style of coffee, coffee must be cold brewed. That means it is steeped in cold water for 24 hours and is brewed below 30 degrees.

“Whereas iced coffee tends to be bitter or acidic, because the hot water extracts the essential oils,” Mr. Vetter said, “cold brewing extracts flavor and caffeine without bitterness.”

To produce such a high-quality drink, however, requires more usage. The result is a silken drink with nearly three times the caffeine content as regular drip coffee.

In addition to the brand’s standard flavors—sweetened, unsweetened, and sea salt and caramel—Sail Away released its new horchata flavor on April 11. Horchata is a sweetened, spiced rice milk native to Mexico and Guatemala.

The new flavor boasts notes of cinnamon and vanilla bean, much like its Mexican cousin.

“I drank this at a lot of restaurants and thought it would be great in coffee,” Mr. Vetter said. “And the fact that the nitro has a creamy aspect to it, it doesn’t need any dairy. The nitro component acts as the dairy.”

Above all else, Sail Away considers itself to be a Long Island brand. The coffee line was launched on Long Island and Long Island continues to play a major role in its growth and success.

“We’ve primarily focused on Long Island and then, late last year, started building it up in New York City,” Mr. Vetter said. “The growth of the company has been amazing. Every year we’ve been growing. Every season we’ve been growing. I think it’s what the brand represents, and the fact that we were the pioneers of this on Long Island. It was the first time people learned and experienced what nitro cold brew was.”

As for the future—both of coffee and of Sail Away’s brand—Mr. Vetter sees expansive possibility in the market, and considers his own role to be that of innovator. His goal, and the goal of Sail Away, he said, “is to continuously dig deep, to continue to be innovative and expand our line, and to keep the culture fun and exciting.”