Thomas Pastuszak's Vinny Is Wine In A Can - 27 East

Thomas Pastuszak’s Vinny Is Wine In A Can 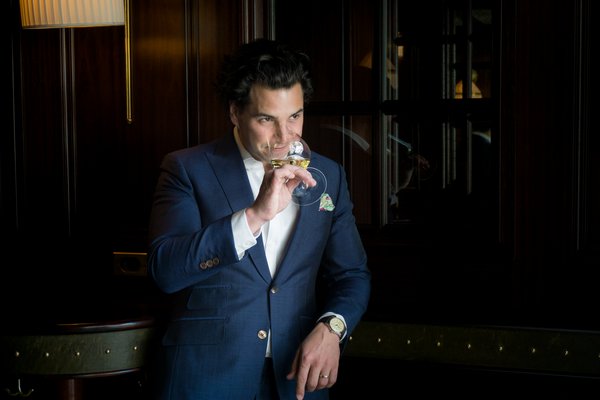 One trend that has not faded with the passage of time—and by “time,” I mean the last few years, to be clear—is canned wine. Portable, potable, millennial chic. Is there a drink more summertime cool than wine-in-a-can? Call it the democratization of wine. Call it access for all. Call it marketing genius. Call it whatever you want, but the trend that is beaching-with-wine continues to tick upward, with more and more winemakers on board.

“I grew up in New York City and moved to the Finger Lakes for college,” Mr. Pastuszak said. It was at Cornell where he began his tenure in restaurants, after a medical school adviser suggested that he needed real-life experience to beef up his resume. Following graduation, he managed restaurants for two years, as he contemplated his next steps.

“It took me getting my MCAT scores and getting my applications together,” he said. He realized that restaurant life was the life for him, and that he always had the “safety blanket of getting into med school.”

While running a restaurant group in Ithaca, which he described as “trial by fire”—he was, by turns, the de facto wine buyer, cocktail constructor and sommelier—Mr. Pastuszak enjoyed the benefits of living and working in the Finger Lakes. “It was very easy for me to get hands-on experience in a winery,” he said.

His love affair with the Finger Lakes wine region started—but did not end—there.

In 2011, under the guidance of legendary sommelier and restaurateur Robert Bohr, Mr. Pastuszak began running the wine program at Tom Colicchio’s meatpacking district restaurant Colicchio & Sons in New York City. A year later, he was hired as the opening wine director for the NoMad, the hotel and restaurant operated by the team behind the critically acclaimed Eleven Madison Park.

“I basically realized, when I moved to New York [City], that no one knew about Finger Lakes wines,” Mr. Pastuszak said. “I kind of made it a personal mission to pour the wines by the glass … to show love for really good wine.”

Besides increasing awareness of a region near and dear to his heart, Mr. Pastuszak had another mission in mind: to produce some of his own. “The benefit of having worked in the vineyards and worked in wineries while in the Finger Lakes was that I already knew a bunch of grape farmers. I already knew where the top sites were,” he said.

His foray into production began with the label Terrassen, which he started with his wife, Jessica Brown (now the senior analyst for JetBlue airline’s food and beverage team), an old vine red wine project that focuses on Finger Lakes varietals and specific vineyard sites.

Next, in 2014, inspired by some of the world’s great dry Riesling producers (perhaps most notably, Austria’s Knoll), Mr. Pastuszak kicked off another label, Empire Estate, the mission of which was “to promote New York, promote dry Riesling, get wine out into different markets.”

But Mr. Pastuszak’s most user-friendly project, VINNY—a play on words, combining vin, the French word for wine, and the abbreviation for New York—began in 2015. Like Terrassen and Empire Estate, VINNY is made at Red Newt Cellars, under the mindful craftsmanship of wine-maker Kelby Russell. Grapes—both Riesling and Grüner Veltliner—come from growers on both Seneca and Cayuga lakes.

The result is a competitive product: a bona fide New York wine that is, by turns, complex and refreshing, and that elicits the freewheeling attitude of, say, a can of beer popped open on the beach. Which is to say: This is serious wine with an un-serious bent, designed to appeal to those looking to expand their casual drinking chops.

“Canned wine is very exciting for a lot of people,” Mr. Pastuszak said. “The format of the can allows people to get excited about it.”

But, beyond the flash of the can, there is something else to be excited about: portable, accessible and high-quality wine that represents the state and that comes in eminently drinkable 250-milliliter servings. New York wine is, to hear him tell it, better than it has ever been. It’s a good time to celebrate one of our own.

On the South Fork, you can find cans of VINNY—sold in four-packs—at Wainscott Main Wine and Spirits. The wine is also available on premises at Montauk’s Navy Beach and East Hampton’s EMP Summer House.