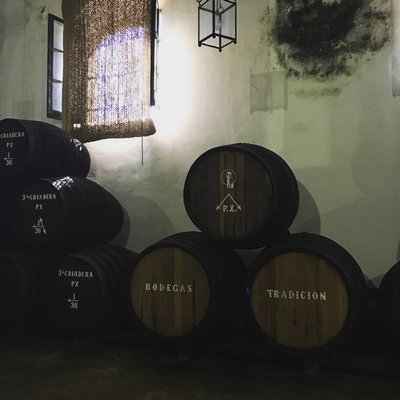 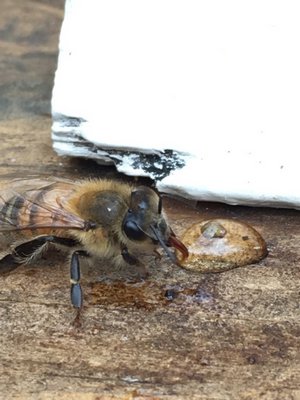 In September, I had the pleasure of visiting Bodegas Tradicion in Jerez de la Frontera, a small town in the Andalucia region of Spain that is home to one extremely important export: sherry.

To understand sherry properly is to move beyond that bottle of Harvey’s Bristol Cream that claimed permanent residence in your parents’ liquor cabinet of old. No, sherry is not, ubiquitously, the dark, sticky stuff of ’70s lore. Yes, some of it is sweet—but not all of it. And yes, some of it is dark and raisinated. But sherry is also full of surprises.

First, to the process. Without getting too mired in technicality, allow me to explain, briefly, how sherry is made. A wine made of white grapes is vinified in the traditional process: grapes are pressed, juice is fermented with either natural or introduced yeast, and yeast converts the sugar in grapes to alcohol. Sherry can be produced from three grapes—Palomino, Pedro Ximénez and Moscatel—though the drier variations are generally made only from Palomino.

In cases of both dry and sweet sherries, the juice is fermented into alcohol and then fortified with a spirit—generally brandy, which is made from grapes—which increases the alcohol level to anywhere between 15 and 20 percent. In sweet varieties, the fermentation is actually stopped early by the introduction of the brandy, meaning that not all of the sugar in the juice has had time to convert to alcohol. This remaining sweetness—called residual sugar—is what makes these sweet wines sweet.

All sherries are aged in open casks, which allow for maturation and oxidation. But in clear sherries, a layer of yeast, called flor, is allowed to develop over the top of the wine. This layer protects the wine from oxygen and light, the two factors that turn white wine brown. Wines without flor can turn anywhere from amber to a deep chocolate in color and the secondary notes—nuts, raisins, dark fruits—also develop as a result of that exposure.

Bodegas Tradicion ages its sherries for a minimum of 30 years in American oak. The winery bottles twice a year in 60-year-old casks and produces the typical herries for the region: Fino, a dry, clear sherry served cold as an aperitif; Oloroso, a darker, oxidized sherry that contains 17 to 18 percent alcohol from fortification; Amontillado, a dark sherry made from Fino that has been allowed to oxidize; Palo-Cortado, a traditional style made in barrels that are left one-third empty to facilitate extreme oxidation; cream sherry, which blends oxidative Oloroso with sweet Pedro Ximénez; and Pedro Ximénez, an unctuous, dark, and sweet wine made from grapes of the same name.

In Spain, the name of the culinary game is Tapas—or, if you find yourself in the north, Pintxos—and at Tapas bars, it’s not uncommon to see diners enjoying a cold glass of Fino with food. While Americans view sherry as an after-dinner digestif, the Spanish drink sherry all meal long.

Bodegas Tradicion’s Fino is a 12-year-old—classic Finos are generally aged only 5 to 6 years—and pairs well with lighter dishes like seafood, canapés, sashimi, and rice dishes. In richness, the Amontillado comes next, a wine that began as a 10-year Fino and that is aged for an average of 30 to 45 years. This higher alcohol wine is best with curries, artichokes, tuna, game birds, and Spanish ham.

Next in line is the Oloroso, a wine lacking any yeast barrier whatsoever, offering it an extremely dark color and character. This wine is aged 30 years and is the perfect accompaniment to pork dishes. Palo-Cortado is, in some ways, the most complex breed of sherry. Tradicion’s version, which sees a few months of yeast aging, is an elegant wine that spends 35 years in cask before release. Pair this beauty with foie gras, risotto, mushrooms, and cheese.

Which leads us to the astounding sweet wines. cream sherry got a bad rap in the ’70s, but, at its best, this wine performs pirouettes, providing acid, backbone, delicacy, and, yes, sweetness. Bodegas Tradicion uses 70 percent oloroso in their cream sherry and 30 percent sweet Pedro Ximénez. The result is a gorgeous wine that will hold up to both dessert and an obligatory cheese course. Not to be outdone, the 100 percent Pedro Ximénez is a nutty, raisin-redolent wine that demands chocolate. Twenty-two years in cask lends this gem complexity.

Of course, there are other notable sherry producers out there, but why not start here? Bodegas Tradicion exports to the United States, with limitations. Visit its website at bodegastradicion.es for a more comprehensive look. I consider these wines, in all their iterations, to be the perfect winter warmers.