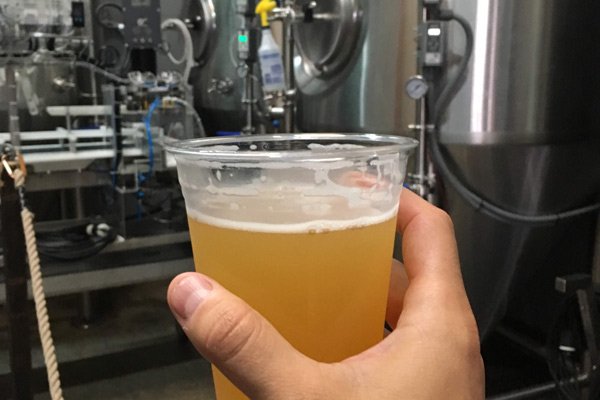 Inside Moustache Brewing Co. in Riverhead.

I write often—and often endearingly—about wine in this column, since wine, ultimately, is my provenance.

Before I was a paid writer, I was a suit-wearing sommelier, haunting some of New York City’s best restaurants with erudition. Pop culture had not yet ignited the daily grind of wine, so it was long hours and good—not great—pay, with none of the rock star accouterment that accompanies today’s young stars. Still, the bubble had not yet burst, and New York was a hot bed of unchecked wealth, Chateau Lafite on a Tuesday, say, with one or two of your closest friends.

Of course, the bubble did burst, eventually, and some would argue that it changed New York dining forever. Out with the tablecloths, with the silver turned upside down to display its markings. Out with the tableside wine service, the suited waitstaff, the wine list presented, preciously, in a leather-bound book. With the recession came a slew of more affordable, approachable, hipper restaurants. Sommeliers began wearing jeans and button-downs on the floor. And wine? Well, it wasn’t a casualty, exactly. But the recession did open a door for a less expensive alternative: Beer.

Which is where this rambling introduction brings me. Long Island, in particular, has enjoyed renewed attention and increased recognition in the past decade for artisanal wines. But don’t let that eclipse the other news coming from out east, which is to say: Beer on the Island is worth a second (and third) look. So many craft breweries have cropped up on the Island in recent years that it’s hard to keep track sometimes. What these breweries add to the landscape—breadth, diversity, and an artisanal spirit, for instance—is immeasurable.

In 2009, Rich Vandenburgh opened Greenport Harbor Brewing Company with his college friend, John Liegey. Originally, the brewery occupied a space on Greenport’s Carpenter Street; years later, they would open a second, larger outpost in Peconic, expanding to include a kitchen. The brewery now produces around 13 beers, many of which are seasonal. Beer is brewed locally and represents a certain renaissance when it comes to craft brewing in this decade.

The passion for beer out east, actually, can be seen quite dramatically through the lens of Montauk Brewing Company, which opened in 2012. Friends Vaughan Cutillo, Joe Sullivan, and Eric Moss are responsible for the massively successful outpost, which is bursting at the seams with craft imbibers on any given weekend. The small tasting room—just off Montauk’s main drag—serves as a testing facility for the owners, who try new brews on their clientele to test for popularity.

In Riverhead, Crooked Ladder Brewing Company produces a rotating cast of seven to 10 craft beers, all available on tap. Beers range in potency from 4.4 percent alcohol by volume to 8.0 percent. (That high-octane brew, if you’re wondering, is the Pipe Burst Winter Warmer, an old ale brewed with chocolate malt, caramel malt, and raisins.) The brewery is the creation of David Wirth and Riverhead native Stevie Czelatka, a volunteer firefighter and craft beer enthusiast who is now the brewery’s head brewer.

There are other breweries, still. Up the Island a bit, Blue Point Brewing Company has been going strong for over 20 years (in the interest of transparency, it should be noted that Blue Point sold to Anheuser-Busch in 2014, although their legacy remains), craft brewing before craft brewing was a trend. Maybe they paved the way for breweries like Moustache Brewing Co., the tiny Riverhead operation producing bespoke beers to sophisticated palates.

Is Long Island beer country? Maybe not quite yet. But we’re not far off, either. And while wine has dominated the drinking landscape for half a century out east, we may be approaching a tipping point, where different beverage fields compete for equal attention and recognition. Too many quality beverages? That’s never a bad thing.

These days, “Hamptons” feels synonymous with rosé, a relationship forged, in no small part, by ... 3 Apr 2019 by My27east
Sign in to comment