You Can Drink Wine With Barbecue - 27 East

You Can Drink Wine With Barbecue 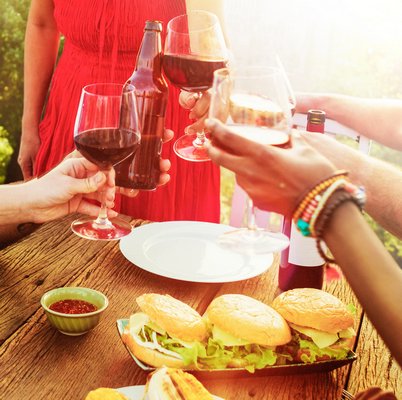 Wine and BBQ go together.

First of all, let’s get one thing straight: Wine does not have to be a formal, sitting-down-to-dinner enterprise.

The mystique of wine—that it somehow promotes erudition or a higher level of dining—is of a bygone era. Wine is affordable now. One can find a well-made bottle for under $20 retail. Delicious stuff is available in (gasp!) cans. So why are we so married to the traditional perception of wine as the drink of dinner?

Now that “summer” season is (albeit reluctantly) upon us, it’s time to embrace the food that gets cooked and served outside. Yes, I’m talking about barbecue, and before you head for the hills because you’ve convinced yourself that the best drink for an outdoor soirée comes either in a punch glass or out of a brewery in the Midwest, just give me a chance. You can drink wine with barbecue. And it’s good! It’s actually good!

What are the characteristics that make food and wine such a great marriage? We look, first, to enhance competing flavors. Is something rich, fatty, and stick-to-your-ribs bad for you? You may want something clean and crisp to cut through all that fat. Or, you may want some bubble to help lighten the load. When I think of barbecue, I think of smoke and grease and fat crackling over a fire. And what I crave is a counter to that, something refreshing, something that will keep me on my toes.

Which means, of course, that there are countless pairing options available for it. If summer means rosé, then why can’t barbecue, too? Mattituck’s Bridge Lane—a subset of Lieb—produces a Cabernet Franc-based rosé that teems with guava, peach, strawberry and watermelon. It comes in a can, which means no fussy wine glasses to contend with. And it pairs well with everything from red meat to chicken. This wine is a crowd-pleaser, and one that’s sure to convert even the most committed beer aficionado.

I’m equally obsessed with (and, apologies, because you’ll need a proper glass for this) the Macari “Horses,” the current release of which is the 2014. It’s a flirtatious, unserious sparkling rosé, served in a crown-capped bottle. The wine is juicy, bright with cherries and ripe strawberries, and bubbly enough to cut through even the richest of barbecued fare.

For a sparkler without the pink, look no further than Channing Daughters’ 2016 Bianco Petillant Naturel, made with Pinot Grigio, Sauvignon Blanc, and Tocai Friulano. This wine comes from hand-harvested grapes that are then pressed, whole-cluster. A wild fermentation in stainless steel tanks takes place, followed by filtration and bottling with a crown cap. Because, unlike Champagne, the wines are not disgorged, a yeasty sediment lies at the bottom of each bottle. Wines are slightly cloudy in appearance and extremely rich and creamy. Served extremely cold and with a salty-sweet meal, they make the perfect partner. (You’ll also want to get this pét-nat while you can, since bottles are extremely limited.)

More-extreme wine lovers may prefer something more obscure. One Woman’s 2016 Gewurztraminer, a spicy, full-bodied, fruit-forward white, loaded with lychee and white flowers, is the perfect complement to that hint of heat you’ve secreted into your rib recipe. The winery is run by Claudia Purita, who grew up in Calabria, Italy, and has parlayed her knowledge of European winemaking into an impressive North Fork business. Her hand-planted vineyard is tended to by Ms. Purita herself.

One of my personal favorite varietals to drink while summering is gamay, the bright, playful grape responsible for France’s red Beaujolais. Typically, gamay produces a grapey, juicy style of wine that is best enjoyed with a slight chill—which feels like a natural counterpoint to eating one’s lunch outside by the pool. You won’t find much gamay on Long Island (the grape performs best in granite soils, notably absent out east), but Pindar has taken on the challenge, and they’ve mostly succeeded. Their recent Gamay Noirs (the current vintage is the 2015) are light, fruity and exuberant. They may not be the most expressive wines, but they’re fun to drink and they won’t overpower the afternoon—or whatever it is you happen to be eating.

Whatever your pleasure—be it red, white, rosé or sparkling—don’t disregard wine as you bring the party outside. ’Tis the season for grilling, yes, but ’tis also the season for raising a glass.